What's the Word? An Unserious Glossary of Vermont Lexicon 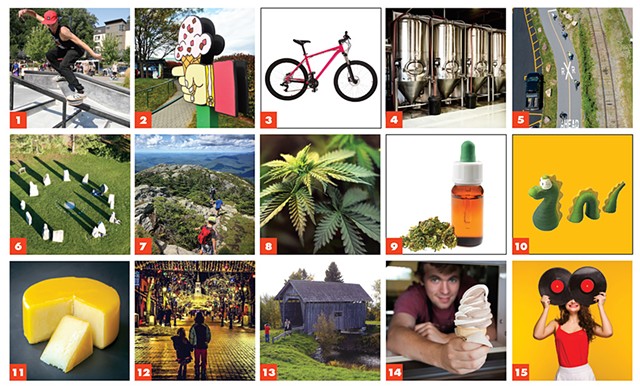 That's generally a good thing, but when you're new to town it can sometimes make life confusing. To help you get acclimated, we've compiled this handy glossary of Vermonty things, written in one of the state's primary dialects: snark.

2. Ben & Jerry's: What people think of when you say you live in Vermont.

3. Biking: A common form of transportation that increases cardiovascular fitness and resentment toward drivers.

4. Brewery: A magical place where water is miraculously turned into an IPA.

5. Burlington bike path: Eight miles of pavement where cyclists can narrowly avoid dogs and pedestrians instead of cars, for a change.

6. Burlington Earth Clock: A circle of stones near Oakledge Park that also serves as a compass, calendar and backdrop for Instagram photos.

8. Cannabis: A medicinal and recreational plant that turns some people into felons and others into entrepreneurs.

9. CBD: Cannabidiol, aka weed for people who hate getting high. If there's a product sold in Vermont, there's a CBD-enhanced version also available.

10. Champ: A dinosaur-like lake monster that was probably just your average fish until it swam through a toxic algae bloom.

11. Cheese: A valuable calcium source that can be obtained for free at most art openings. Taste as many kinds as you can — even if they smell a little off.

12. Church Street Marketplace: A great place for shopping and being asked to sign petitions.

13. Covered bridges: Historic structures that today are mostly used by semitruck drivers looking for a quick and messy way to measure the height of their rigs.

14. Creemee: This is just soft-serve ice cream. You didn't hear it from us.

15. DJ: One of the most common professions in Vermont.

16. Farm-to-table: Food that is served directly off the dinner table in an effort to cut down on the number of dirty dishes.

17. Flatlander: A derogatory term for anyone who isn't a fifth-generation, purebred, certified-organic, grass-fed Vermonter.

18. Flying monkeys: Horrifying sculptures atop the building at 1 Main Street that come to life as soon as you take your eyes off them.

19. Golden dome: A shield on top of the Statehouse in Montpelier that prevents good ideas from getting in.

21. Maple syrup: The most common blood type in Vermont.

22. Moose: A majestic woodland creature you should avoid at all costs.

23. Mud season: The season that occurs between winter and next winter.

25. Phish: A guitar solo that began at the University of Vermont more than 30 years ago.

26. Remote Worker Grant Program: An effort to convince young professionals to relocate to Vermont through the time-honored tradition of bribery.

27. Skiing: A heavily prescribed antidepressant for people who refuse to admit that winter sucks.

28. Snowboarding: Sort of like skiing, if you replace the poles with PBRs.

29. Standup paddleboarding: A cross between surfing, canoeing and just standing there doing nothing.

30. Sunsets: Watch one of these over Lake Champlain, and you'll instantly feel like you made the right choice moving to Vermont.

31. Whale Tails: Jim Sardonis' iconic sculpture, visible between Exits 12 and 13 of Interstate 89, serves as a cautionary tale about the dangers of diving into the shallow end of the pool.

32. Winooski traffic circle: The best place in the state to practice left turns and catch the occasional music festival.

33. World's Tallest Filing Cabinet: Constructed in 2002 by artist Bren Alvarez, this 38-foot-tall sculpture is a popular offbeat tourist destination and a blatant attempt to recruit giants for entry-level office jobs.