What's the Story With the 'Dad Mailbox' in Hinesburg?

On a May excursion from quarantine life, Meredith Gordon, a Shelburne-based comedian, took her husband and two children to Geprags Community Park in Hinesburg for some much-needed fresh air. It was their first visit to the green space.

While exploring the trails, they came on a strange sight alongside a path near two benches: a white metal standard-size mailbox, fixed to a post and adorned with a flower and the word "Dad." At first, they thought it was a geocaching station.

But when they opened the box, they found a pen and three notebooks full of hundreds of notes to people's fathers. Leafing through the pages, they felt as if they'd intruded on some kind of memorial.

"Some of [the notes] were super intimate," Gordon told Seven Days by phone after posting about the mysterious find on Facebook. "It seemed like a very sacred thing."

Who put the mailbox there, when and why? It's not featured or mentioned on the park's website. Calls to the Hinesburg town offices yielded no answers.

"I've never heard of this before," town administrator Renae Marshall said. "It's news to me. I don't think anyone in the town government would know."

She was right. Other staffers were stumped. A call Marshall placed to Kate Kelly of the Hinesburg Conservation Commission turned up nothing.

"I put it up a year after my dad passed away," Lampke, 59, said by phone. Letters were the preferred method of communication between him and his father, George, who died in 2010. Lampke felt compelled to create a special space where he could continue to correspond with his father. The orange blossom painted on the mailbox is a re-creation of an illustration George put on every one of his letters to his son.

Though Lampke did not obtain official permission to install the box, it has stood unbothered for nearly a decade. He's kept his connection to it largely a secret, and he said he had no idea how profoundly the mailbox would resonate with passersby who have come across it — and added their own notes. 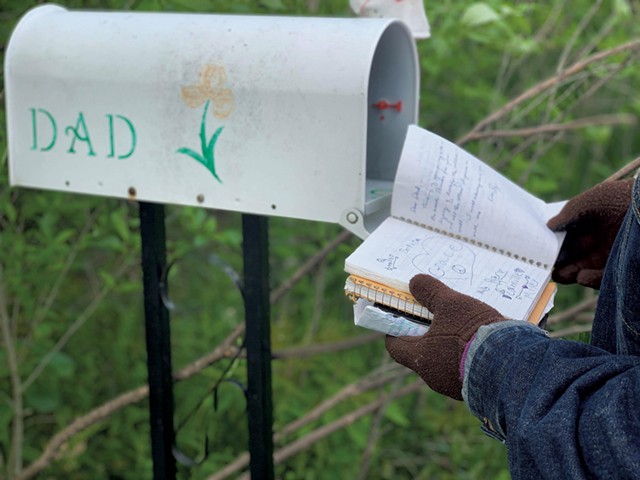 Most of the messages currently in the box are in English, but other languages appear, including Spanish and German. Some appear to be written to fathers who are still living, while others reminisce about dads long passed. Some are clearly the words and pictures of young children just learning how to write and draw, such as a scrawled entry that reads, "Dear Dad, I love you so much because you take care of me and love me."

Lampke said he only supplied the first notebook and has no idea who added the others.

"As I've gone back, I saw that there were more journals there," he said. He returns to the spot often, he noted, sometimes to write more and sometimes to read what others have written. "Some of [the letters] are loving and thankful. Others are extremely painful and heartbreaking."

Indeed, many of the message writers champion their fathers.

"Dad, you are the reason I know everything I know," one note begins.

Dad, sorry when I was 12 or so & you wanted me to join you on our dump trip & I said no. You looked so sad. Now I know why. I hope mom is treating you better now that she is feeling better.

Dear "Dad," I hate you most of the time. You were never the father figure that I needed. As a young woman now, I catch myself wondering if these traits are yours, handed down to me through your genes, and I resent you even more.

Gordon said she sees the installation as "a testament to how complex the word ['dad'] is. [It] means so many things to so many people." She's considered returning to write a letter to her own father, Williston Central School teacher Al Myers, who died in 2009.

"Because I lost my dad, I totally understand why someone would [create this]," Gordon said. "It's so much more intimate than going to visit somebody at a grave site."

Lampke sees the mailbox as a place where people can come to have a private conversation.

"It's opened up a new channel of communication between people and their dads," Lampke said. "It's [George's] gift to all the dads. It provides an opportunity for reflection, forgiveness and appreciation. Years from now, I hope my kids will visit the mailbox."

The "Dad mailbox" is a 10-minute walk from the Geprags Community Park parking lot. Learn more about conservation and stewardship of the park at protectgeprags.org.