WTF: What's the story behind the stenciled Gs around Middlebury? 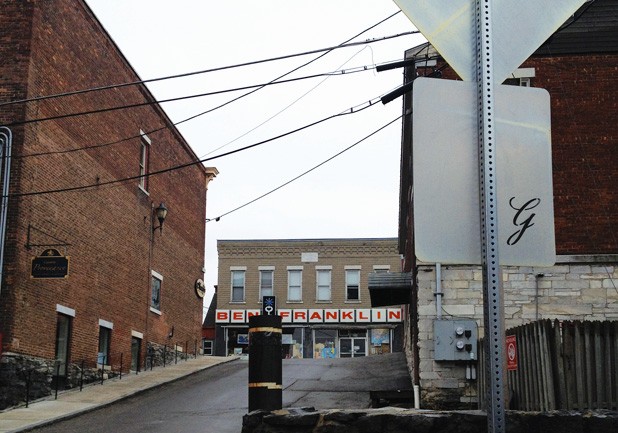 From the middle of the roundabout in downtown Middlebury, three letter Gs are visible — two on the back of road signs, one on a telephone pole.

These aren’t your typical graffiti tags. The stenciled Gs are consistent, varying only in size and some nuanced drippage. They’re black, and elegant and, if you start paying attention, you’ll find them everywhere — on steel street signs, electrical boxes, telephone poles and the sides of buildings throughout Addison County and beyond.

Seven Days spent a recent afternoon loitering outside Two Brothers Tavern, chatting up passersby in an effort to uncover the mystery of the Gs. Who is responsible? What’s the motive? And well, gee, what’s it stand for?

Everyone had a theory — or made one up. Folks who said they were seeing the Gs for the first time took shots in the dark at the tag’s significance. In this college town, those conjectures skewed academic. Does it have something to do with the “G prophecy” from Richard III? Is it a nod to Guinness of Cameroon (Cameroonians are said to have a disproportionate preference for the drink)? Is it an allusion to God himself?

Other passersby weren’t so sure.

“I see an E and a Y in script,” his wife offered. The New Yorker referenced “SAMO” — short for “same old shit” — a tag that cropped up around the Big Apple in the late ’70s attributed to artist Jean-Michel Basquiat. “Maybe this guy’s trying to be like him,” he said.

“It doesn’t look like graffiti; looks too neat to be graffiti,” countered James Berg, his son Noah in tow.

G is for Garamond, “which is a very beautiful typeface, which I use in all my novels,” said an author sitting on a bench.

“That stands for Gen Y,” a bike-helmeted geology professor, Peter Ryan, confidently theorized. “It’s a very underrated generation,” he said of the cohort born between the 1980s and the early 2000s, “and one that needs a little more cred.”

A man wearing a gold chain stopped to give the G on the back of a yield sign a closer look. “Green Mountain State?” He posited. “No, that’d be too easy, maybe. It’s gotta be something a bit more complicated.”

Then he offered a key piece of advice about small-town sleuthing: “If I don’t know, I ask one of two people, the bartender and the barber. They know everything.”

And thus, by the jigsaw magic that Vermont communities often facilitate, hints and tips led us straight to our G-man. But in the interest of confidentiality, and the street artist’s future career, let’s call this Gen Y-er — whom Seven Days eventually reached by phone — Gary.

“My goal is to be the most famous graffiti writer in Vermont, which is akin to being, like, the best skier in Egypt,” quipped Gary, a graphic designer by trade. “I aspire to live cheaply and somehow have enough money to live a meager existence and work as little as possible.”

It was more than a year ago that Gary used his computer to enlarge the script G graphic — which he had created for a previous art project — to various sizes. Then he began stenciling them onto surfaces in the area.

“They were like a message to one particular person,” he said, admitting that he was surprised anyone had even noticed the Gs. “People tend to ignore things that they’re not interested in.”

Gary refers to the year-plus he spent stenciling Gs as his “campaign.” “Real graffiti, the game I was playing when I was in New York, it’s about being famous and getting your name out there,” he said.

But this campaign was different. It started when Gary’s girlfriend left him, he said, “for some guy with a motorcycle, a job and questionable morality.”

“It was about love, it started about love,” he said. “But you know, once you put it out there enough, you know, that’s your identity, you become that, it becomes you, or whatever.”

During his campaign, Gary did his stenciling quietly at night, and says he authorities only interfered once. “There was a time when I was, like, you know, fuck it, I’m gonna get caught and that’s just part of the whole thing. I’m willing to be arrested for love.”

G, it turns out, is for Gretchen.

“Yeah, so it didn’t work out,” said Gary, who says he enjoys the smell of spray paint. “She’s moved on and so have I. You know, the alphabet is filled with letters. So I’ve moved on to painting Hs.”