WTF: What's the story behind the "sacred" bricks of Norwich University? 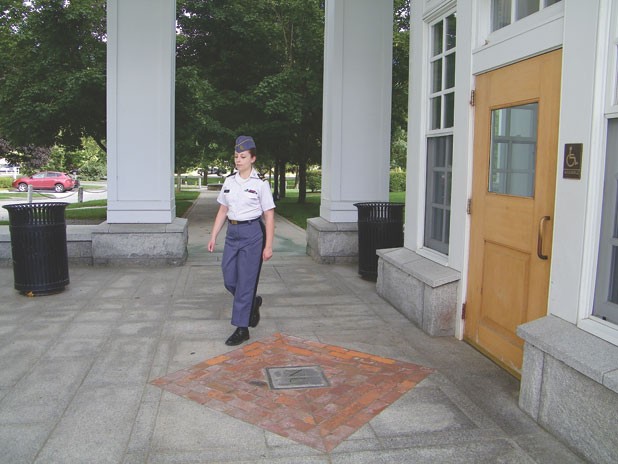 Norwich University is designed for marching, set snugly in a valley in the village of Northfield with an elaborate network of walkways and cascading steps. And with roughly 2300 undergraduates — the majority in the Corps of Cadets — the pavement takes a healthy pounding.

But there is one spot on campus where no regulation footwear is ever supposed to tread. At the Kreitzberg Library entrance, the pavement is inlaid with a diamond-shaped arrangement of red-clay bricks. In its center, a concrete square reads “NU.” While civilians — and even some faculty — often pass directly over the bricks, uniform-clad students step around them.

Why? I wondered. What’s so special about these bricks?

I went to see Gary Lord, a Charles A. Dana professor of history and resident campus historian. He told a tale that began nearly 200 years ago, in 1819, when Capt. Alden Partridge founded the school that would become Norwich University in Norwich, Vt. Those bricks, Lord said, were part of the Old South Barracks. When a fire destroyed the building in 1866, the school moved to Northfield. The bricks didn’t follow — yet.

My next stop was the Kreitzberg Library.

There, I met with Clarke Haywood, a 2012 NU graduate who majored in history and secondary education and now consults for the Norwich Virtual History Project. “When I was a [prospective student], we were told not to step on the bricks because they were from the Old South Barracks,” he said. Freshmen in the Corps of Cadets — rooks — are also taught to avoid the bricks during orientation, or Rook Week.

“Norwich has a tendency to self-perpetuate rumors,” Haywood said. “A senior will tell his rooks, ‘Do not step on the bricks, or the clock will fall on your head, or you’ll turn to dust.’” At least the reduced traffic on the bricks helps preserve them, Haywood observed.

I spent the next few hours reading up on NU history, then met Cadet Maj. Arielle Eaton at the library entrance. Eaton is a 20-year-old senior who serves as the Corps of Cadets public affairs officer and is the head editor of the Norwich Guidon.

Another rook hurried by, did the greet-and-salute and stepped over — but not on — the bricks. Eaton called out, “Don’t step over the bricks!” He froze.

Rooks are supposed to “square” around the bricks, said Eaton, smiling a little. I recalled something she’d told me earlier: “You don’t really learn about [the bricks] until you almost step on them.”

Eaton added that Partridge also figures in the oral tradition. A statue of the school founder faces the library entrance, “watching to see if you’ll step on his bricks,” she said.

The story of how the bricks came to the present-day Norwich campus is nearly as dramatic as the legends they spawned. Lord connected me with alumnus David Briggs, innkeeper at the Hotel Coolidge in White River Junction.

In the late 1980s, Briggs was driving past the site of the old NU campus when he noticed work under way and stopped for a look. Construction was soon to start on the Marion Cross Elementary School. Briggs said he was “stunned” to see that the work had unearthed the remains of Old South Barracks. “Bricks were everywhere.”

The story continues with retired Lt. Col. Nicholas Collins, NU class of 1955, who led the excavation. I called Collins at his Hanover, N.H., home. He told me that he’d hurried to the site that day and grasped the urgency: In a few days, crews were going to pour concrete over history. He got authorization from the school board to enter the site, and the foreman offered to loosen some bricks with a bulldozer.

Collins, his wife, Elaine, class of ’34 alumnus Dan Fleetham, and his wife, Betty, worked into the night. “We dug, cleaned up, stored, put in my trailer and in the back of my jeep 2224 bricks,” Collins told me.

Days later, a load of bricks was placed in storage on the NU campus near today’s Shaw Outdoor Center. When the Kreitzberg Library was completed in 1993, the now-venerated brick formation was placed there; a time capsule rests beneath. Other bricks can be found in the university’s Sullivan Museum and History Center. Some are still in storage on the campus grounds.

Two days after I spoke with Collins, he traveled up from Hanover to meet me in person. We talked for a while inside the library, then walked out to the entrance, where he watched today’s cadets square around the bricks of the Old South Barracks.