WTF: What's the Story Behind the 'Angry Birds' Buses? 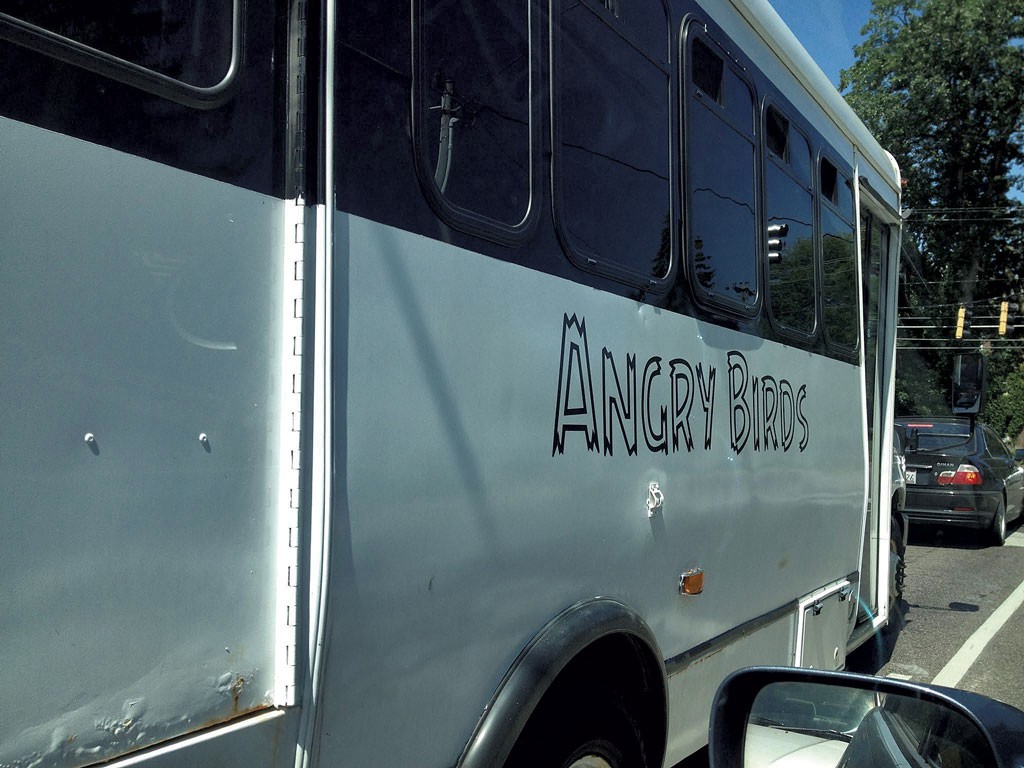 Recently, a Seven Days reader wrote to inquire about a fleet of vehicles he sees occasionally at the University of Vermont Medical Center in Burlington. The cars, vans and buses, also spotted at other health care facilities and public schools around Chittenden County, all sport the words "Angry Birds" on their sides. Angry Birds balls are mounted atop their radio antennae. Otherwise, there's no company name, insignia or phone number to identify their origin or ownership.

Most people not living under the proverbial rock are probably familiar by now with Angry Birds. The addictive app invites users to use virtual slingshots to shoot overstuffed, legless birds into poorly constructed pig dwellings, thereby toppling those dwellings for points and perverse pleasure. Yes, really.

Since the game's release by Finnish gamemaker Rovio in December 2009, Angry Birds has been downloaded more than 3 billion times worldwide, making it the top-selling mobile app on Apple's App Store and the most downloaded free game series of all time. The curious appeal of the malevolent avian swinophobes has hatched a mega-flock of merchandise spinoffs, including Angry Birds-branded cookbooks, skateboards, duct tape and even a space-themed attraction at the Kennedy Space Center near Cape Canaveral, Fla.

So why would the Angry Birds franchise, a veritable T. rex of cash cows, need to advertise in Vermont?

Short answer: It doesn't. According to the vehicles' owners, the recent appearance of foul-tempered fowl in and around the Queen City has more to do with overcoming the stigma of riding the so-called "short bus."

The Angry Birds-branded fleet belongs to Big Brother Security Programs, Inc. The Williston-based firm provides "specialty" transportation services to children, teens and adults with physical or developmental disabilities. Founded in June 2014 by Cathy Robar and Shelley Palmer, the company filled a niche left open when Benways Taxi closed in the summer of 2014, leaving many mobility-impaired travelers without wheelchair-accessible rides.

Big Brother has since secured contracts with several local school districts, such as the Winooski School District, and assisted-living facilities such as Green Mountain Nursing Home in Colchester and Cathedral Square, Kindred Starr Farm and Kindred Birchwood Terrace nursing homes in Burlington.

Palmer explains that the Angry Birds logo and antenna toppers were never meant as advertisements or promotions for the app or its products. They began simply as a way to direct kids to the right bus or van when it was time to ride home from school.

"Here was my technical problem: How do you get a dozen different sedans at a dozen different schools to be recognized by any student when you arrive?" Palmer says. His solution: He painted "Angry Birds" on the sides of the buses and vans, then went to Amazon.com and bought a handful of Angry Birds antenna toppers for a couple of bucks apiece and told the kids to look for them.

"There's a real stigma attached to riding on the short bus," he adds, referring to the horizontally challenged transports that have long been a source of schoolyard ridicule. "The kids all know Angry Birds, and they like Angry Birds. We rebranded them ... so kids can feel good about riding on something that's different."

Last year, Big Brother came under scrutiny from Burlington's taxi licensing board, which asked its owners to explain why they were operating in the Queen City without having their vehicles licensed or inspected there. But, as Robar and Palmer told the board at the time, they don't define their firm as a cab company, as they don't pick up fares on the street or respond to ride requests by phone; moreover, all their vehicles sport placards that read, "Not for hire."

Indeed, Palmer insists that Big Brother still operates as a private car service that's not available to the general public except under previously arranged contracts. For example, Big Brother occasionally transports the Green Mountain Derby Dames (which it also sponsors) and makes its Angry Birds vans and buses available for corporate events and wedding parties — whose guests, Palmer notes, "are usually sloppy drunk, not angry."

While we're in WTF country, readers may be wondering: Why is a transportation company that specializes in hauling seniors, kids in wheelchairs and sauced bridesmaids named after the malevolent overseer in George Orwell's dystopian classic 1984?

Palmer, a former bail bondsman, explains that he registered the business name with the Vermont Secretary of State's Office back in 1995, when Big Brother operated as a privatized house-arrest program. (Palmer's other pursuits over the years have included working in the construction trades, lobbying in the Statehouse, and running for both the Vermont Senate and House of Representatives as a Tea Party Republican.)

When he and Robar got into the transit business last year, Palmer says, conducting a new trade name search would have been too costly and time-consuming. So they stuck with the old name, giving it a new mission and an "Inc." on the end.

Incidentally, Palmer says that some of the buses actually have Big Brother posters hanging inside à la 1984. What do kids' parents think of the Orwellian messaging of "War is peace, slavery is freedom, ignorance is strength"?

Evidently, no angry customers yet.