What's the story behind that tower at Fort Ethan Allen?

The handsome stone tower on the eastern edge of Fort Ethan Allen perplexes many motorists driving by on Route 15. It’s commonly — and mistakenly — assumed to be a military lookout, says William Parkinson, a board member of the Essex Community Historical Society. He notes that the structure is, after all, located on the grounds of a former military installation.

Lance Richbourg, an artist who painted in a studio at the fort for many years, offers a more fanciful possibility. It’s where the Vermont version of Rapunzel let down her long hair, he suggests.

But what is, or was, it really?

The prosaic answer — it’s a water tower — won’t inspire romantic imaginings of Cavalry sentinels or fairy-tale witches and princes. But the 80-foot-tall structure does have an architectural and engineering history that makes it one of Chittenden County’s most interesting, if no longer enigmatic, landmarks.

Built in 1893 by the Kansas contracting firm of Ziegler & Dalton, the tower was the first of 100 structures to rise at the fort. An early-20th-century army ledger pinpoints the construction cost at $19,065.55.

The tower tapers gracefully from a 21-foot-diameter base to a conical slate roof that used to be topped with a weathervane, which “just vanished,” Parkinson says. Walls ranging in thickness from four feet to 21 inches are faced with marble quarried in Proctor, documents reveal. There’s nothing precariously Pisa-like about this sturdy edifice, whose exterior remains remarkably unblemished after weathering 119 northern Vermont winters.

The interior is another matter — or so I’m told. The public hasn’t been allowed to enter the tower for the past three years due to the unsafe condition of a circular wooden stairway that winds its way to an observation deck. Parkinson had led school groups to the top of the tower twice a year, but he no longer has a key to the latched wooden door.

Pigeon poop has defiled the upper reaches of the interior, adds Essex town engineer Dennis Lutz. Still entirely intact, however, is a 50,000-gallon steel tank inside the tower, Lutz says. He likens its appearance to a rocket ship in the film adaptation of Jules Verne’s 1865 novel, From the Earth to the Moon.

Because electricity did not come to the fort until 1905, steam engines were initially used to pump water into the tower’s tank from wells that had been dug nearby. The daily flow was calculated on the basis of what was needed to hydrate 8500 soldiers and 1800 horses.

Much of the data about the tower come from the 1905 U.S. Army ledger that now resides in the special collections department of the Durick Library at St. Michael’s College. Standing in a building that originally served as the tower’s pump house, Parkinson displays a photocopy of the ledger that shows burn marks on the edges of some pages, suggesting that the original document had been rescued from a fire at some point.

He guides a visitor to historic photos of the tower mounted on one of the walls of what’s now the Fort Ethan Allen Museum. Parkinson serves as the enthusiastic curator of the museum’s extensive collection of memorabilia pertaining to the fort.

But even longtime residents of the fort may be unaware of this museum, which stands inconspicuously in the shadow of the tower and across from a bottle-return processing center. It’s a scruffy scene of chain-link fences, metal-sided industrial buildings and a dirt parking area crowded with SUVs and a tractor trailer. The tower resembles a stately lighthouse surrounded by a sea of ugliness.

Maybe one day, Lutz muses, the grounds will be beautified. Then the Fort Ethan Allen tower might be viewed as similar to a stone water tower in Sackets Harbor, N.Y., that was built around the same time. A photo Lutz found on the internet shows that slightly taller, but otherwise identical, tower standing on the manicured grounds of Madison Barracks, a former military installation on the eastern shore of Lake Ontario.

Repairs to the interior of the Fort Ethan Allen tower are scheduled to get under way this summer. For $50,000, Lutz says, the stairway will be made safe for tours that he and Parkinson hope will resume next year. Visitors will again be able to enjoy what both men say is a spectacular view of the Winooski Valley and the Green Mountains.

Then the tower could fairly be called a lookout, although any trace of Rapunzel’s golden locks may still be hard to see. 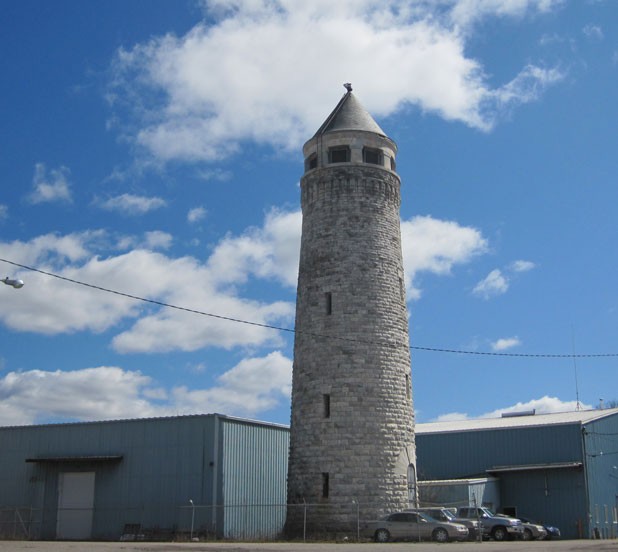