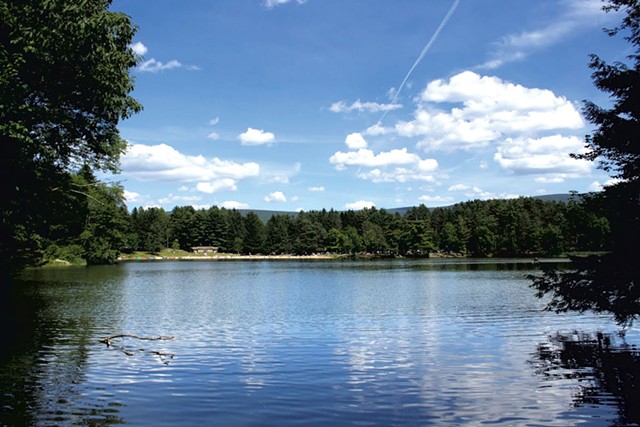 Knee-deep in the brief season when Vermonters can enjoy their beautiful state parks without donning long underwear, one reader wrote to inquire about the history of Lake Shaftsbury State Park and, specifically, about its scenic artificial reservoir.

Lake Shaftsbury is one of countless manmade bodies of water in Vermont, created in the days before Act 250 prevented people from drastically altering the landscape without considering the project's ecological or social impacts. While the lake itself hasn't inspired much written history — more on that later — there's plenty of color in the chronicles of the town of Shaftsbury, which was founded 255 years ago this week.

Much of that history is documented in the 1978 monograph Ordinary Heroes: The Story of Shaftsbury. Written by Ruth Levin and edited by Tyler Resch — the latter still works as a historian at the Bennington Museum — Ordinary Heroes isn't a riveting page-turner like Scott Turow's novel of the same title. But it does offer some extraordinary facts about this small southwestern Vermont town that's had an outsize influence on the state and the nation.

Benning Wentworth, the first royal governor of New Hampshire, chartered Shaftsbury on August 20, 1761. While Wentworth named the town of Bennington after himself, he named Shaftsbury for the Third Earl of Shaftesbury, an English philosopher also known as Anthony Ashley Cooper, whose writings influenced such big-brained thinkers as Rousseau, Voltaire and Goethe.

Among the notables born in Shaftsbury was David Millington, the 18th-century inventor of grafting wax, which proved invaluable for grafting apple trees and made possible the spread of apple orchards throughout New England. When Millington died, the American Horticultural Society donated $200 to erect a monument on his Shaftsbury grave bearing a carving of an apple branch with two scions.

Another native son of Shaftsbury was Jonas Galusha (1753-1834), Vermont's fifth governor. Galusha married Mary Chittenden, daughter of Vermont's first governor, Thomas Chittenden, then ran three times for governor against his brother-in-law, Martin Chittenden, before finally defeating him in 1815. Thanksgiving dinner that year must have been awkward.

Speaking of bad blood between in-laws, Shaftsbury was also the birthplace of the last person publicly executed in Vermont. On February 6, 1839, Archibald Bates of Shaftsbury was hanged in Bennington for killing his brother's wife — despicably while she was nursing her infant child.

Bates hardly seems representative of the typical temperament of Shaftsbury's townspeople. Another native, Jacob Merritt Howard (1805-1871), went on to become a U.S. congressman and senator from Michigan. In 1854, Howard wrote the resolutions on which the Republican Party was founded. He was also instrumental in drafting and passing the 13th Amendment to the Constitution, which Lincoln famously used to free the slaves.

Yet Shaftsbury's best-known inhabitant was probably the poet Robert Frost, who bought an 18th-century stone house in the town in 1920 and lived there until 1929. The house, which now serves as the Robert Frost Stone House Museum, is where the Pulitzer Prize winner penned one of his most famous poems, "Stopping by Woods on a Snowy Evening."

Before Frost's time, locals might have "stopped by" Lake Shaftsbury for a cure for what ailed them: In the 19th century, the area was known as the Vermont Healing Springs. According to historical info from the Vermont Department of Forests, Parks and Recreation, "Mineral waters from the wet meadows were bought and sold for their healing properties. The meadow was later flooded and created a pond, which powered a lumber mill to transport logs harvested from the surrounding forest."

After the millpond dam collapsed circa 1913, the Lake Shaftsbury Corporation built a larger, sturdier dam of earth and concrete, as well as the Lake Shaftsbury Inn and cabins on its shores. In the 1920s, the family of John James, a longtime Shaftsbury resident, purchased the property and turned it into a summer resort. The cabins were lit with hydroelectric power generated by the dam. A springhouse was built over the remaining healing springs. (The state park still has a 0.75-mile nature trail circling Lake Shaftsbury called the Healing Springs Trail.) The property was later converted into Camp Avalon, a girls' summer camp.

In 1974, the State of Vermont bought 100 acres of Shaftsbury's lake and forestland from the James and Matteson families. The latter played a major role in shaping the town's history, with at least five of its members having represented Shaftsbury in the Vermont legislature.

"I was there at the transfer of it [to the state] when Tom Salmon was governor," recalled Resch, of the Bennington Museum. Describing himself as an avid swimmer, Resch admitted he prefers swimming laps in Lake Paran in North Bennington rather than Lake Shaftsbury because the latter is so shallow.

"I remember I swam across it once and touched bottom on each stroke. It's only about three feet deep," he noted. "But it's a lovely place."

Resch had no recollection of the area being known as the Vermont Healing Springs but suggested contacting Jim White, a retired state forester who worked at Lake Shaftsbury from 1966 until 2006.

White, who had an office in an old farmhouse beside the lake for many years and still lives in the area, admitted he couldn't remember much of the history of the lake or the healing springs. Still, he reflected on his time working at Lake Shaftsbury as "the greatest job in the world.

FYI, dogs on leashes are still welcome on the Healing Trail at Lake Shaftsbury year-round, but not on the picnic area or beach between Memorial Day and Labor Day.*