What's the Story Behind an Ad Seeking a Stolen Sculpture? 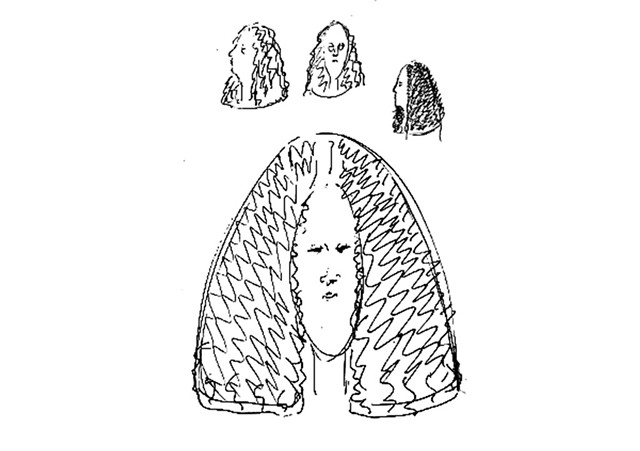 Sometimes this very newspaper presents a head-scratcher, leading us to wonder, WTF is the story behind this?

Such was the case two weeks ago when someone paid for a small, one-time display advertisement asking, "Have you seen this sculpture?" Appearing on page 64 of the August 29 issue, it included several rough sketches of the missing artwork and described it as about two feet tall, made of gray concrete and resembling "the head of a girl with a narrow face and long, curly hair." According to the ad, the pilfered piece disappeared from an open Jeep over the winter.

According to our past surveys, roughly half of Seven Days readers were kids or not even born yet in 1980. As a reminder to those who were old enough to remember those days, that was the winter of the "miracle on ice," when the U.S. men's hockey team defeated the Soviet Union's team and went on to claim Olympic gold in Lake Placid, N.Y. For more historical perspective, that year also marked the global debut of the Hungarian-born Rubik's Cube and the founding of a small cable news channel known as CNN.

But we digress. What's the story behind this stolen artwork, and who's trying to recover it after all these years? That would be the artist herself: Vaughn Judson, now 77, who lived in Vermont from 1972 to 1983. Seven Days spoke to her by phone last week from her home in Marlinton, W.Va.

Judson explained that she created her concrete composition in 1963 or '64 while attending the Rhode Island School of Design in Providence, R.I. The piece, titled "Ginny," was one of two sculptures she based on a RISD classmate and model of the same name. (Judson confessed that she can't remember Ginny's last name.) One sculpture, which Judson gave as a wedding present to friends, portrayed Ginny with her hair up. The missing one captured Ginny with her frizzy locks down, "like a big hair ball," Judson described.

Due to the sculpture's weight, Judson loaned it to a friend in the winter for a less-than-artistic reason: to give her Jeep better traction in the snow. Alas, the Jeep had plastic windows and easy-to-open sides, allowing the thief or thieves to burgle the bust. It's only because of the sculpture's significant heft, Judson said, that she suspects it might still be extant in Vermont.

According to Judson, she never reported the crime to police and left Vermont a few years later. Unfortunately, she kept no photos of the piece and had to sketch it from memory. As she put it, "When you're divorced and a single parent, you don't hang on to ephemera much."

So why seek it out now?

"I've become very intuitive over time, and it came to me recently," she explained. "The time is right."

If the pyramid-shaped piece is still kicking around in, say, a Burlington basement, college dorm or fraternity house, Judson is offering a $100 reward for its return, "no questions asked."

No one should fear legal retribution. Vermont has a six-year statute of limitations on most felonies and misdemeanors, other than serious offenses such as kidnapping, murder and aggravated sexual assault. So there's no risk of criminal prosecution to the offender — or any associates or heirs who may have inherited the sculpture.

"People are telling me I shouldn't do this because it's been so long and I must be crazy," Judson said. "By now they've had it long enough. I'd like to bring Ginny home."

What's Behind the Name WTF?

Last month, a reader emailed us to ask why Seven Days uses the term WTF. Here's our answer:

Hello, Susan. Thanks for writing to us regarding our column name. I assume by your question, including multiple question marks, that you find our use of the acronym WTF offensive. To clarify, it's an abbreviation for "Whisky Tango Foxtrot," the official name of the column, which seeks to answer questions from readers about things they've seen or heard around Vermont that puzzle them.

A brief history of the term: Seven Days didn't invent "Whisky Tango Foxtrot" as shorthand for WTF. Credit belongs to the International Civil Aviation Organization, which about six decades ago adopted the Alpha Bravo Charlie alphabet — formally known as the International Radiotelephony Spelling Alphabet — as a way for international pilots, military and civilian, to communicate more accurately over the airwaves.

Prior to its adoption, pilots often misinterpreted Ms for Ns, Ds for Bs, Ts for Ps, and so on, because letters can sound alike on a radio. Though previous alphabets of this kind were in use by militaries worldwide as early as World War I, the ICAO standardized the radio alphabet in 1956 to eliminate any such confusion.

As for Whisky Tango Foxtrot itself, U.S. military personnel, and the militaries of other countries, have long used it to express befuddlement or exasperation over something that's unexplained or just messed up. Because service members aren't permitted to swear over the airwaves, Whisky Tango Foxtrot became their shorthand, much the way that "Jeezum Crow" became the politically correct way for New Englanders not to take the Lord's name in vain.

Like many other military acronyms, including SNAFU — "Situation Normal, All F-ed Up" — Whisky Tango Foxtrot eventually found its way into the civilian vernacular, and we pay homage to our service members by using it proudly.