What's That Bird That Calls 'Dorito'? 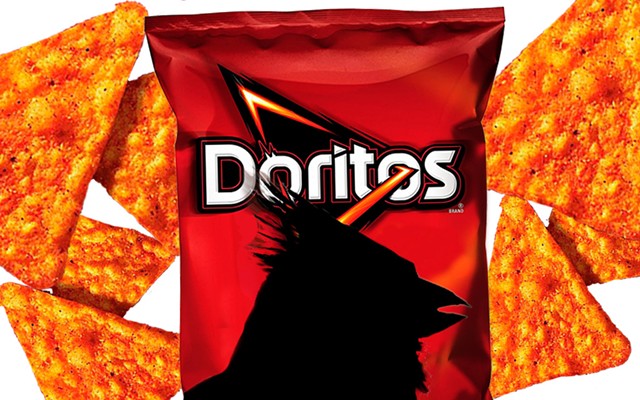 Have you ever been walking down the street, minding your own business, when some bird started screaming about tortilla chips? One Seven Days reader had that very experience — kind of.

More specifically, he wrote in asking if we could identify a bird he's heard repeatedly in Chittenden County whose call sounds like the name "Dorito." Dorito, Dorito, Dorito.

Since it's spring and our feathered friends are really letting loose, we agreed to find the source of that funky birdcall (which is not the same as birdsong, we would soon learn). WTF?

First, we called up Montpelier biologist Bryan Pfeiffer, who's written for the New York Times, EatingWell and Field & Stream, among other publications. He said that, without knowing where the bird is, it could be difficult to determine its species based solely on call or song.

Though he couldn't figure out which bird might chirp "Dorito," Pfeiffer said, "There is a bird — the American goldfinch — well known to say 'potato chip' when it flies." Close, but not the snack we were looking for.

Our second stop on the trail to the truth was Mark LaBarr, the conservation program manager at Audubon Vermont. Part of his job is to stand outside and identify birds by their calls, gathering information to report to the Vermont Center for Ecostudies. That organization studies birds and other creatures with the aid of citizen scientists and recently published a study that compiles more than 25 years of data on forest birds.

LaBarr had mixed sentiments about the Dorito bird quest. "Personally, when I'm trying to identify birds and hear a vocalization I can't place, I grab my binoculars and go looking for it," he said.

Just like Pfeiffer, LaBarr stressed the importance of location in identifying birds. "Thrushes are a good example," he said. "In lower elevations, around water, you would hear a veery, which is a thrush; and if you go to the top of Mount Mansfield, you would come across a Bicknell's thrush, a relative of the veery that you would only find at the top of Vermont's highest peaks."

Both thrushes sound similar, at least to an untrained birder listening to the recordings on the Audubon website — kind of shrill, perhaps a little needy?

It became clear that we weren't going to get anywhere without knowing where the Dorito bird was located. So we reached out to our petitioner for more information. In turn, he posted a question to his Facebook page soliciting help.

"Birder friends in Vermont. Does anyone know about the birdcall I hear from time to time? The call sounds like the bird is saying, 'Dorito! Dorito! Dorito!'" he wrote.

To both our surprise, some people knew exactly what he was talking about. "Yes! I think it's a cardinal! Not sure male or female," one woman responded.

"Thanks, because I have often wondered about the Dorito bird," another wrote.

And then came a firm answer: "Cardinal! It's nesting in your hedges behind our house!" a helpful neighbor wrote.

Our reader then backed up these claims with a YouTube video he found that demonstrated the varied calls of the bird.

While the means of discovery were somewhat anticlimactic, we had solved the riddle of the Dorito bird. But it raised other questions: If a cardinal call sounds like the word "Dorito," why doesn't everyone hear it that way? Why didn't we know about the Dorito bird? And is that the only sound it makes?

The northern cardinal isn't exactly subtle. The males are a flamboyant red with a dashing black mask and bright-red beak. They have a wide-ranging habitat that, according to Audubon, includes suburbs, thickets, swampy areas and woods — basically, wherever there are dense bushes for nesting.

Perhaps that explains why our reader couldn't name just one place where he had heard the bird — it was everywhere.

Still ... Dorito? For help on that front, we spoke with "Bird Diva" Bridget Butler, who regularly appears on Vermont Public Radio to discuss avian life. We wanted to know how many different sounds a cardinal could make.

First, Butler informed us that birds vocalize in two ways: songs and calls. "Songs tend to be longer and melodious; calls are short and of varying intensities," she explained.

"Typically," Butler continued, "we can group the songs and calls of birds into five voices, all used in different ways." The first three are songs for mating and claiming territory.

"The other voices are shorter, more call oriented," Butler said. Those include contact calls — kind of a "how do you do?" — begging calls used by hatchlings, and alarm calls.

The way people interpret different bird voices is very personal, Butler said. "You're using a mnemonic device to be able to explain the pattern and phrasing of what you're hearing," she explained. So one person could hear a cardinal and think, Huh, that sounds like "Dorito." Another could hear it and think it's saying, "Nemo! Nemo! Nemo!"

When asked which calls we might hear right now from cardinals, Butler said probably a mix of territory and mating songs. "Every male is going to mix it up a little bit, and everybody has their own way of interpreting what they're hearing," she noted. "I always tell people, 'Go with what works for you.'"

Naturalist LaBarr had a more exciting interpretation. "I think a cardinal song is a Star Wars laser gun," he said. "Pew, pew, pew!"

To hear the call in question, jump to 1:13 in this video: