WTF: What's That Apron Around the Bike Path? 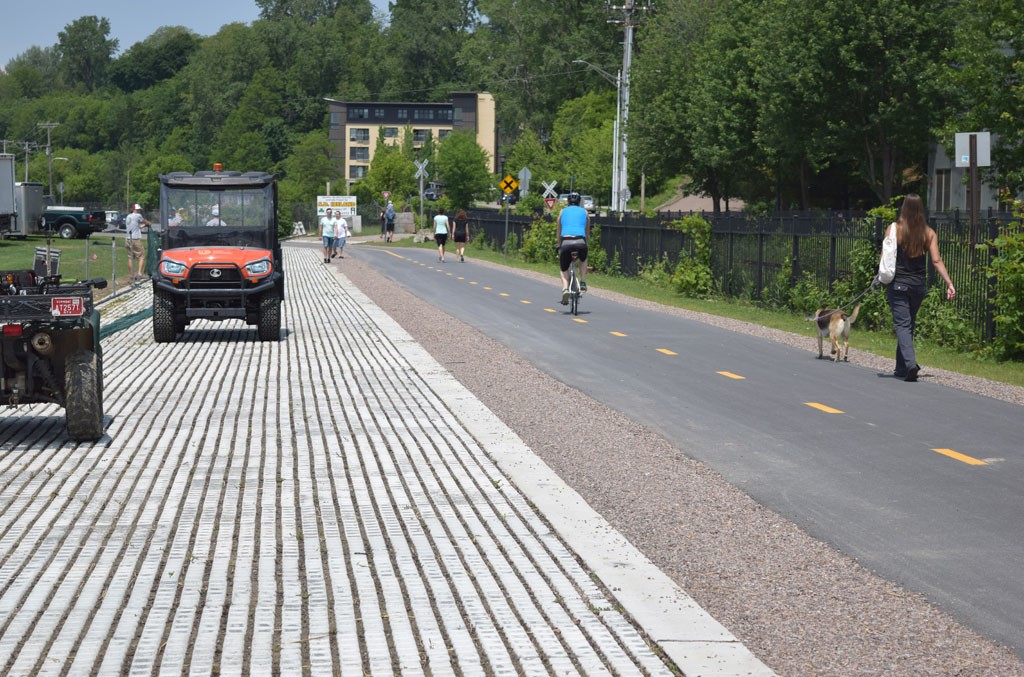 Anyone who's been down to Burlington's Waterfront Park since spring sprung has likely noticed the sweet new stretch of bike path on the park's northeast side: smooth-as-chocolate pavement flanked by crushed-stone shoulders. A yellow stripe down the middle reminds people not to hog the whole path.

Nice. But what, exactly, is that white, waffle-patterned apron that runs alongside a stretch of the path?

The 16-foot-wide strip of concrete nodules is clearly not meant to accommodate bikes, trikes or skateboards. A step or two on the surface reveals it's not much friendlier to the foot. It looks like a path of another kind.

"That is a new Drivable Grass," says Burlington Parks and Recreation director Jesse Bridges. "It replaces the old gravel access road that used to run along the back section of the path."

Drivable Grass is the trademark name for what its maker, Soil Retention, calls "permeable plantable pavement."

The "grass" part won't come until next year, says Bridges, but the "drivable" part was in action last week as crews set up for the Burlington Discover Jazz Festival. They parked trucks on the strip to unload equipment destined for the festival tents, which were set up nearby.

The Drivable Grass is part of a $2.56 million project that includes a new skate park and the refurbishing of the portion of bike path that stretches from Perkins Pier to the Urban Reserve, just beyond the dog park, Bridges says. Funding comes from a voter-approved tax increment-financing district. Under that arrangement, the project is paid for with funds generated by the anticipated increase in tax revenues after its completion.

Work on the path continues this summer, even as the bikeway and the park remain open. "We're trying not to close it down," Bridges says.

The newly reconfigured Waterfront Park portion of the bike path follows what used to be a dirt access road on the eastern edge of the park. No longer does the path slash through the middle of the park, disrupting summer festivals with a swath of pavement.

The Drivable Grass running along the newly refurbished path is intended to allow trucks to back up to event tents assembled on the Waterfront Park lawn without turning the turf into a muddy mess, Bridges explains. The hard-to-walk-on nubs help make the surface permeable so water will drain easily.

By next spring, the nubs should be covered with grass. What now looks like an oddly misplaced piece of concrete will eventually blend in with the lawn.

Reconstruction of the eight-mile-long bike path includes widening the pavement, Bridges says. In some places, the path had been six feet wide, in others 10 feet. Now the standard width is 11 feet, with two two-foot-wide gravel shoulders where possible. In some places, easements allow only the 11-foot path with no shoulder. In the busiest portion of Waterfront Park, the path has been deliberately narrowed to 10 feet with shoulders to slow traffic, Bridges says.

The new skate park, which is taking shape just north of its predecessor, should be finished by the end of the year, Bridges notes. When it's done, the temporary skate park will be dismantled.

The site of the former skate park, adjacent to the hulking remains of the Moran Plant, will be part of a rerouted Lake Street, Bridges adds. Bike path users this summer will find that stretch narrowed by construction fences. When the work is done, the path will loop to the west of the dog park, running closer to the lakeshore.

Also still to come are changes that will iron out problems with the traffic pattern at various bike path intersections, including the one at the end of College Street near the ECHO Lake Aquarium and Science Center, according to Bridges.

Refurbishing will continue in future years and extend north to the Winooski River bike bridge.

So far, Bridges says, the wider path with the new yellow center line seems to have encouraged a stronger sense of decorum among bike path users who are inclined to walk three or four abreast. "I do notice they look down and take a step over," he observes.

There's plenty of room now. There's even a swath of Drivable Grass.