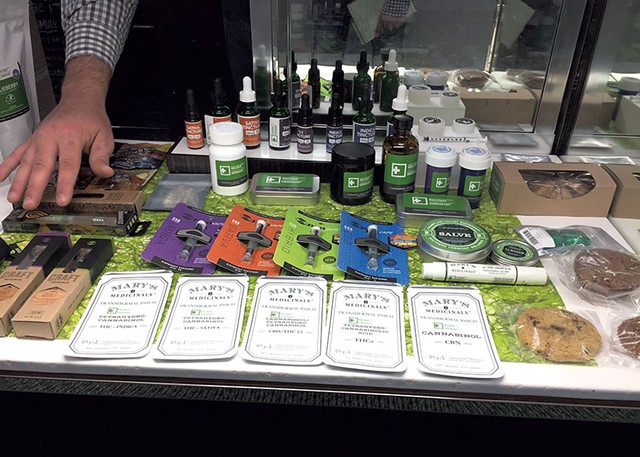 Since Vermont legalized growing and possessing cannabis in July 2018, the number of registered medical marijuana patients has dropped off sharply. Now the dispensaries that pioneered growing and selling medical pot in the state say their futures rely on selling recreational weed in a legalized marketplace.

The medical program lost approximately 500 patients, from a high of about 5,700, in the 10 months since partial legalization took effect, according to the Vermont Department of Public Safety, which oversees the registry. More could choose not to renew their cards, which cost $50 annually. Dispensary operators say sales have declined by about 20 percent since last July.

"I'm hoping we've found our bottom at this point," said Shayne Lynn, executive director of Champlain Valley Dispensary and Southern Vermont Wellness. "But I don't know if we have. And that's the part that's very nerve-racking."

The slump could deepen: Leaders of the Vermont House announced this week that a closely watched bill to legalize the retail sale of cannabis would have to wait until next year for a vote, potentially delaying the development of a recreational market.

High overhead costs have long kept dispensary operators from competing with the illicit market. They say a flood of product grown and sold illegally since last year has only compounded the problem. And curious customers have gone to check out the goods in Massachusetts, home to newly legal recreational dispensaries, according to Christopher Walsh, the president at Grassroots Vermont, a medical dispensary based in Brandon.

"We all expressed concern when this went down with the July 1 law, and everything is unfolding exactly as we said it would," Walsh said. "The only people who got hurt in this are the medical dispensaries."

Those dispensaries are at a pivotal juncture. To stay afloat and provide the best care possible, their owners argue, the for-profit medical businesses must be allowed to sell recreational cannabis in the "adult-use" market, if and when the state legalizes it. That revenue could help stanch the flow from the medical side.

"We always have been and always will be a medical program," said Amanda Kitchen, who serves as chief compliance officer for the Vermont Patients Alliance, a Montpelier dispensary, and works with another dispensary, PhytoCare, which is located in Bennington. "Even if we do participate in adult use, it would be to subsidize the medical program. That is our priority."

Walsh was more forceful in his assessment. "Don't let there be adult use or full legalization without the guys that have spent all this money to be compliant not being able to play in that arena," he said. "I mean, that's just asinine to me."

But other legalization advocates worry that the three dispensary operators who run the state's five medical cannabis businesses focus more on profits than on patients. Eli Harrington, a cofounder of the media and events company Heady Vermont and a registered Statehouse lobbyist, thinks that the program is not working properly and could become an afterthought should lawmakers eventually legalize selling recreational weed.

"Is the medical marijuana program meant to serve people who are sick and provide them with medical cannabis, or is it meant to protect the investments of the dispensary owners?" Harrington said. "Corporate welfare is not a compelling enough argument ... They've had no competition for years. What other advantages do they need to prove they can serve people's needs?"

The dispensaries have lobbied at the Statehouse this session for changes to both the medical program and the recreational cannabis law. According to filings with the Secretary of State's Office, the Vermont Cannabis Trades Association, an outfit representing multiple dispensaries, and Grassroots Vermont have paid lobbyists almost $17,000 combined as of mid-April.

Until this week, it seemed like money well spent. A recent version of S.54, the Senate-passed bill to create a regulated cannabis market, would allow medical dispensaries to sell recreational pot and get first dibs at it. The amended measure calls for five "integrated licenses," available only to the medical dispensaries, that would allow them to act as cultivators, wholesalers, product manufacturers and retailers and to operate testing laboratories. Others involved in the market would need to apply for specific licenses that would allow them to cultivate cannabis, for instance, or make weed-infused products.

The legislation would give dispensaries a five-month head start selling weed before other retailers could open up shop.

Lawmakers won't finalize the bill and send it to Gov. Phil Scott this session, but they could pick it back up in its current form in January 2020 and finish the job.

Rep. Sarah Copeland Hanzas (D-Bradford) thinks the licenses are an important aspect of the measure that would allow dispensaries to continue running "seed to sale" operations. She chairs the House Government Operations Committee, which added the integrated licensing provision to the bill and approved it earlier this month.

"They are experienced at this, they know how to cultivate, they know how to formulate certain kinds of consumables, and I think there probably is a great niche for them in the marketplace," said Copeland Hanzas, who noted that other aspects of the bill aim to give illegal growers a chance to become legit.

Harrington firmly opposes giving the medical dispensaries a head start. He thinks all licensees in a new market should begin at the same point — no leg up for anyone.

He worries that the dispensaries already wield too much power. He pointed to a recent report, first published on his website, that Champlain Valley Dispensary allegedly grew hundreds of pot plants at a vegetable farm in Craftsbury while claiming the crop was hemp. Test results showed the plants, grown in an unsecured greenhouse in violation of state law, had high levels of THC, the psychoactive compound in cannabis.

Lynn hasn't commented on the issue beyond a statement that read, in part, that the company "acted in compliance with all state laws and regulations." It's unclear whether the Vermont Department of Public Safety, which is tasked with regulating dispensaries, has disciplined the company.

Public Safety spokesperson Adam Silverman declined Seven Days' request for interviews with two employees of the Vermont Crime Information Center, which oversees the program: Lindsey Wells, the medical marijuana program administrator, and Jeffrey Wallin, the center's director. Silverman did say that the department can suspend or terminate a dispensary's operating license — but it has never done either.

"Our medical dispensaries have not been held to the standards of any other states," Harrington said. "The fact that there's been no publicly acknowledged enforcement action since the program started means we've either got the cleanest, best medical program that's ever been devised, and no human's ever made an error — or it means that there's no effective regulation."

Harrington's organization has written before about patient complaints concerning moldy or subpar product sold at dispensaries. He noted that, unlike in other states, there's no requirement that medical businesses use third-party testing, meaning the dispensaries vouch for their own product's potency and cleanliness. And registered patients have long complained of high prices, limited product selection and a bureaucratic system that's difficult to navigate.

Francesca Thompson says such problems drove her out of the program. She received her medical cannabis card in October 2017 and signed up as a patient at Grassroots Vermont after a doctor diagnosed her with pancreatitis. Prescription meds didn't help, so she turned to weed.

After driving some 90 minutes to Brandon from her home in Dorset, Thompson would wait in a sterile room and pick out her products. She found little direction from the dispensers, who couldn't help her find a strain that eased the pain of her condition. Per state regulations, she transported any medicine she bought from the dispensary in a locked box.

"I felt like a criminal in a system that was supposed to be set up to help me," she said.

Thompson eventually switched dispensaries — a process that is allowed only every 30 days and requires patients to pay $25 — but was disappointed with Bennington's PhytoCare, too.

She didn't renew her card last October because, by then, she'd found relief on what she called the "gray market" with a grower who helped her find a strain that lessened her pain, for half of what she paid to a dispensary.

"It just is broken," said Thompson, who testified at the Statehouse earlier this year about her experience. "The system forces you to go out in a gray market to get well in a state that has a program. And so, why aren't they looking at fixing that? And why aren't they addressing the patients' needs and the rights of the patients? I mean, isn't that the whole point of the program?"

S.117, a bill to change some aspects of the program, is also not likely to pass this session. Despite the program's shortfalls, it retains an important place in the cannabis ecosystem, said Matt Simon, a lobbyist and the New England political director for the Marijuana Policy Project, a Washington, D.C.-based advocacy organization.

"For one thing, products shouldn't be taxed for medical patients," Simon said. "Another consideration is that there are underage patients who need it and can't have access through an adult-use system. Whatever happens, we need to keep the medical program."

In 2004, Vermont became the eighth state to legalize medical marijuana. Dozens of other states have followed suit since, but Vermont's program is still the only one overseen by a division of law enforcement, according to Simon; other states created boards or directed their health department to oversee their programs.

Initially, Vermont patients had to grow their own or acquire it from a caregiver, and few medical conditions made a person eligible.

Mark Tucci was one of the bill's architects. He suffers from multiple sclerosis and had for years championed cannabis as a medicine. Advocates had to make compromises to get a bill approved, he acknowledged. Legislators concerned about cannabis diversion, youth use and impaired driving had the upper hand, and the resulting law focused more on prevention than on patients, according to Tucci.

"Despite all the restrictions we had ... compared to what we had before, which was the Dark Ages — hell yeah, I'm happy with how it turned out," said Tucci, who still proudly recites his Vermont medical marijuana patient number: 77921.

The restrictions loosened as the years passed. In 2011, legislators permitted four medical cannabis dispensaries, though the law initially mandated that the businesses run as nonprofits; in 2013, the first three opened. The state issued a fifth medical marijuana dispensary license in 2017, and legislation allowed for each to open a satellite location.

Simon noted that other states that have legalized recreational sales have allowed medical dispensaries to participate.

But Vermont's medical dispensary operators interviewed for this story all expressed frustration with the legislative process. Even after years of promising developments and changing attitudes toward cannabis, they still don't know what their future holds.

The medical program is about "supporting Vermonters in accessing cannabis," Lynn said. "We've done it for six years, and we want to continue to do it because it's real, and a lot of Vermonters depend on us ... But the reality right now is that without S.54 moving forward, we're going to be under a lot of pressure the next one to two years."