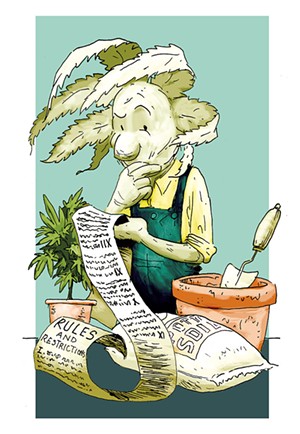 It's a done deal. Gov. Phil Scott on Monday signed a bill that legalizes marijuana — with plenty of caveats. As of July 1, individuals 21 and older can possess two mature cannabis plants and four immature ones, along with up to one ounce of pot.

The new law is far from cut-and-dried, however.

Seven Days posed some questions that pot smokers might have to two lawmakers who voted for H.511 and know it well. We also checked in with local and federal law enforcement officials to see whether the new law will change the way they operate.

Their responses proved that the exact implications of the new law remain hazy — and the smoke likely won't clear anytime soon.

Will I be able to buy marijuana in Vermont?

Nope. Not unless you have a medical marijuana card, in which case you can buy it at a dispensary just as before. The new law legalizes individual possession and cultivation but not the sale or purchase of the drug.

"Many of us see that as a shortcoming of the bill," said Sen. John Rodgers (D-Essex/Orleans), a longtime legalization proponent. "There are going to be people who can't grow it, or won't grow it, who would like to procure it."

Can a friend give me marijuana?

Rep. Chip Conquest (D-Wells River), who helped shepherd the bill to passage as vice chair of the House Judiciary Committee was less certain.

"If I have my ounce of marijuana, and I go to my friend's house and share some with him or her, my belief is that there [is] not a penalty for doing that," Conquest said.

He’s right. The law doesn’t include penalties for those who give an ounce or less of marijuana to an adult friend. Selling pot remains illegal.*

Are edibles and other forms of ingesting marijuana allowed?

"If you have an ounce of marijuana, you're free to consume it any way you want," Rodgers said.

Marijuana use is prohibited in public places and wherever tobacco use is illegal. What about in a car?

You can't consume marijuana while driving, nor can you drive under its influence. Passengers can't smoke, either, and they can't carry "open containers" of marijuana.

So what, exactly, is an open container?

"That, I think, is subject to interpretation," said Rodgers. "If you have a baggie or a Tupperware in your car and it's open, it's an open container. But in my mind, if the baggie is sealed and in your purse or in your briefcase or in the dash, that's a closed container."

Where can I light up?

In your home or a friend's home. The same is true with edibles, though if you're consuming them in public ... who's gonna check your candy for THC content?

"That would be a little hard to enforce, but technically you're not supposed to," Rodgers said. "Are you going to start harassing everyone who is eating gummy bears?"

July 1 feels a long way off. Can I plant a few seeds before then?

No, according to Rodgers, who grows hemp and sympathizes with those frustrated by a truncated first growing season. "The sooner you get it in in the spring, the better the plant is gonna be."

Conquest's advice to impatient gardeners: "Till up the ground, but don't stick anything in it."

Speaking of seeds: How do I get my hands on some?

"There's a huge assortment of seeds available on the internet," Rodgers helpfully noted. "Procuring seeds should not be a problem."

But is that legal?

The law defines marijuana to include seeds, which suggests that there's no legal way to purchase them, either. And sharing with a friend, again, remains up for debate.

"There is no prohibition on gifting someone seeds if you are growing," Conquest said.

Will I be able to grow marijuana on my own property?

Yes. As long as it's in a secure location, out of public view. And keep in mind, that six-plant limit is per dwelling, not per person. If you're a renter, you need the property owner's permission to grow on the premises.

The legislation states that cannabis must be grown "in an enclosure that is screened from public view and is secure so that access is limited to the cultivator and persons 21 years of age or older who have permission from the cultivator."

"I think that's a little bit open to interpretation," Rodgers said. His take: "Out of view and surrounded by some sort of enclosure or fence, or inside your house."

Conquest's standard is a bit tougher. "If the door is just latched and somebody from the outside can come and unlatch it, then that I think would not qualify as a secure location that prevents people without permission from getting in."

If I can only possess one ounce of marijuana, what happens when my two marijuana plants yield a multi-ounce harvest? Do I have to ditch perfectly good ganja?

No. That one-ounce limit refers to what you can carry around at a time. It doesn't include your harvest, so you can stockpile all the weed you can grow — as long as it stays in your house.

What if I were to break the state law by, say, growing three mature plants or carrying more than an ounce?

First-time offenders will be given the option of participating in a court diversion program. After that, the more you're caught with, the more serious the penalty.

"We're not out actively looking for people's homegrows unless they're massive," said Colchester Police Chief Jennifer Morrison, who is also president of the Vermont Association of Chiefs of Police. "If we had trafficking-level concerns, then absolutely we would be investigating that."

How about the feds? Are they coming for my crop?

As the Vermont House debated the bill on January 4, U.S. Attorney General Jeff Sessions announced that he was reversing an Obama-era directive that encouraged a hands-off federal approach in states that had legalized marijuana.

Vermont U.S. Attorney Christina Nolan hinted that her office has bigger concerns than Joe Homegrow. Marijuana cases brought by her office have been few and far between, she said, while opiates are a priority in a state overwhelmed by them.

"We don't start charging cases based on what the state legislature is doing," Nolan said. "But we need to keep our options open to prosecute each case as it arises. You just don't know the unique circumstances of a case until you see it."

*Clarification, January 25, 2018: A previous version of this story provided a mixed answer on the legality of dispensing marijuana. After further consultation with Rep. Conquest and a legislative lawyer, Seven Days can say with certainty that it will be legal to give a friend one ounce or less of weed .