What's Holding Up the Michael Jacques Trial? The Busy Couple Defending Him 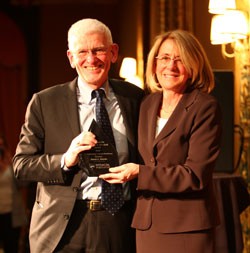 It was four years to the day since Michael Jacques was arrested in connection with the rape and murder of Bennett, his 12-year-old niece — a brutal crime that shocked and outraged Vermont and led to the passage of tougher sex-crime laws.

Milne attended the scheduling conference, at which Assistant U.S. Attorney Craig Nolan confirmed that federal prosecutors could be ready for trial in six months. From the bench, U.S. District Judge William K. Sessions III agreed that “this case has been going on a long time, and we should be pushing this along.”

But just minutes later, Sessions laid out a more leisurely timetable and set a trial date of September 3, 2013. Later, outside the courthouse, a teary-eyed and shaky Milne said, “That sounds like September 2050 to me right now.”

The reason for the delay: a scheduling conflict. One of the two death penalty specialists appointed to defend Jacques is representing another accused killer in January in Puerto Rico. The trial is expected to last six months. As attorney David Ruhnke told Sessions last week in Burlington, “I can’t be in two places at once.”

Seated beside the white-haired Ruhnke was Jean deSales Barrett, his wife and longtime law partner. The two are among the most acclaimed death penalty lawyers in the U.S. The New Jersey-based couple was appointed to Jacques’ defense team in 2009 after federal prosecutors decided to seek the death penalty for the accused killer.

Federal law requires defendants facing execution to be represented by lawyers with experience trying capital cases. Since Vermont doesn’t have a death penalty, very few criminal defense lawyers here have the required know-how, says Vermont Law School professor Cheryl Hanna. So Ruhnke and Barrett were brought in to assist Federal Public Defender Michael Desautels in what’s expected to be the most watched murder trial in years.

“It’s not unusual at all for these lawyers to be extremely busy,” says Hanna.

It’s no wonder the couple — particularly Ruhnke — is in demand. Over the course of his 36-year legal career, Ruhnke has been in more than 100 jury trials in state and federal courts. He has tried 16 capital punishment cases — 10 in federal court. Fourteen of those trials ended with life verdicts; two that resulted in death sentences were later set aside.

In other words, no client of Ruhnke’s has ever been executed.

“David Ruhnke has tried more federal death penalty cases than any other lawyer in the United States,” says David Bruck, a defense attorney from Virginia specializing in capital punishment. He has known Ruhnke and Barrett for 20 years. “He’s smart. Good judgment. Hard worker. And he doesn’t sweat the small stuff.”

Ruhnke and Barrett declined to be interviewed outside the federal courthouse on Elmwood Street, but Ruhnke remarked that their lives are “an open book.” Indeed, the public record is full of news accounts documenting his and Barrett’s high-profile careers — and the notorious criminals they’ve been called upon to defend.

In the early ’90s, Ruhnke was appointed in the first federal death penalty case to go to trial in the Northeast, and secured a life sentence for notorious Mafia hit man “Tommy Karate” Pitera after a jury convicted him of murdering six people and orchestrating a vast drug ring in Brooklyn. More than a decade later, in 2007, Ruhnke persuaded a jury to spare the life of New York drug trafficker Kenneth “Supreme” McGriff for ordering the murders of two rivals, one of them rapper Eric “E. Money Bags” Smith.

Ruhnke has also been called on to defend terrorists facing the needle. He was co-counsel for two al-Qaeda operatives who participated in the 1998 bombings of American embassies in East Africa, which killed 224 people and injured thousands. The jury spared their lives.

Two months ago, the defense for a high-profile terror suspect — a co-defendant of 9/11 mastermind Khalid Sheikh Mohammed — formally requested that Ruhnke join the team.

The upcoming murder trial in Puerto Rico centers on Alexis Candelario-Santana, who faces a death sentence for committing or ordering the murders of 21 people between 1993 and 2009.

A caseload like that could weigh on a lawyer’s conscience, but defense lawyers who know Ruhnke describe him as a consummate professional who remains focused on defending his clients.

“David’s sort of a classic example of a guy who doesn’t read his press clippings,” says Joshua Dratel, a New York City defense attorney who defended the embassy bombers alongside Ruhnke.

Barrett, too, is an expert in the death penalty. She has tried nine capital murder cases — three of them federal — that resulted in life verdicts. She has been appointed “learned counsel” — an old-fashioned term for lawyers experienced in capital cases — in more than 25 potential death penalty cases by courts in four different federal districts. One of those, in the late ’90s, was the murder trial of a Connecticut man accused of burning his fiancée to death in the trunk of his car. It was the first Manhattan death penalty trial in four decades.

Colleagues say Ruhnke and Barrett, like most death penalty defense lawyers, are motivated by a philosophical objection to capital punishment and a belief that even the most heinous criminals deserve a good defense.

“David also just believes in what lawyers are supposed to do — there has to be one person in all the world who will stand up for someone rather than just assume that they are guilty and should be executed before they are tried,” says Bruck.

To a lot of Vermonters, the evidence against Jacques appears overwhelming, his guilt all but assured. Prosecutors have alleged that the Randolph man created a fictitious internet sex ring to lure Brooke Bennett to his house, where he is accused of drugging, raping and murdering the girl before leaving her body in a shallow grave in the woods.

But Vermont Law School’s Hanna and others warn against assuming the case is a slam dunk — or that a guilty verdict would result in the death sentence. Data compiled by the Federal Death Penalty Resource Counsel — a group of legal experts that includes Bruck, Ruhnke and Barrett — show that in more than 200 capital cases that required juries to choose between sentencing a defendant to life in prison or death, they opted for life two-thirds of the time.

Ruhnke and Barrett’s record beats that.

“Nobody should take for granted anything about the case, particularly the sentencing,” Hanna says. “Just because someone is charged with the death penalty doesn’t mean they’ll get it.”