WTF: Whatever Happened to Burlington's Ban on Excessive Car Idling? 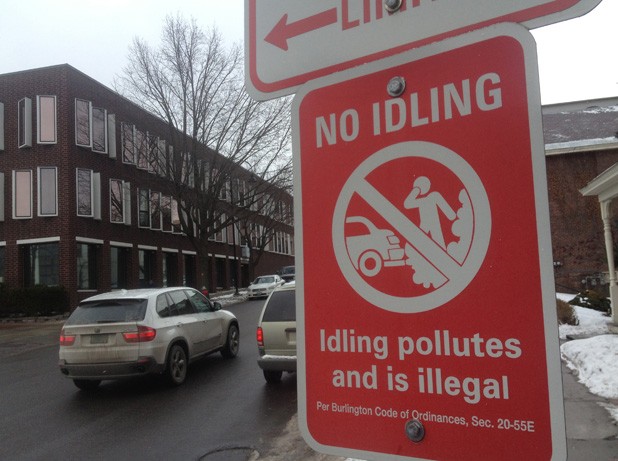 Walking up Marble Avenue on a recent 35-degree morning, I noticed a parked car idling with no one in it. Presumably the owner didn’t want to get in a cold car to drive to work. On St. Paul Street, another car was idling. This time the driver was inside, absorbed in texting. Near Main St., I saw one of those bright-red no-idling signs (“Idling pollutes and is illegal”), erected in 2007. Next to it, a truck was idling while the driver made a delivery to a nearby restaurant.

WTF? If it’s illegal to idle in Burlington, why are so many people doing it?

A Burlington ordinance passed in 1990 limited idling to five minutes, but only April through October; idling in colder months was given a pass. In its early years, the ordinance was never enforced. By 2007, with a growing awareness that greenhouse gas emissions were contributing to climate change, Burlington’s Progressive city administration under then-mayor Bob Kiss breathed new life into the idling ban.

At an April press conference that year, Kiss, along with police chief Tom Tremblay and other officials, called for an “idle-free Burlington.” At the time, the fine for a violation was $45. Tremblay said at the conference he hoped that, with increased citizen awareness, “enforcement won’t be necessary.”

In late 2009, the Public Works Commission substantially modified the ordinance. The idling limit was reduced to three minutes and the winter exemption was removed. The fine, however, was lowered to $12. Exceptions were made for refrigerated trucks, vehicles running while being repaired, work vehicles repairing or installing equipment and situations involving “the health or safety of a driver or passenger.”

The state has also taken action on idling. In 2008, after a campaign initiated by Browns River Middle School seventh graders in Jericho, the Vermont School Bus Idling Rule (Act 48) was instituted, limiting idling to five minutes on school grounds. This year, on May 1, Act 57 will take effect, prohibiting the “idling of motor vehicles” statewide. It specifies a five-minute limit and has a longer list of exemptions than does Burlington’s ordinance.

Why is idling a big deal? Because it has a demonstrated negative impact on health, the environment and the economy. The Centers for Disease Control and Prevention records Vermont’s adult asthma rates — exacerbated by exhaust gases — as the highest in the country, with rates for children not far behind. Recently, the U.S. Department of Energy reported that unnecessary idling in the United States wastes six billion gallons of fuel annually and emits particulates (from diesel engines), nitrogen dioxide, carbon monoxide and carbon dioxide. A 2009 study from Vanderbilt University found that idling alone accounts for 1.6 percent of total U.S. CO2 emissions. “Much of this idling,” the authors noted, “is unnecessary and is economically disadvantageous.”

The study further stated that “a one-minute decline in idling among the estimated 57 percent of Americans who hold inaccurate beliefs about [idling] would reduce CO2 emissions by roughly 8 million tons annually [and] eliminate the need for 903 million gallons of gasoline per year.”

The researchers concluded optimistically, “Motor vehicle idling among individual private citizens is one behavior that may be amenable to large-scale policy interventions.”

So have Burlington’s “interventions” made any difference? Idling citations by the Burlington Police Department have been infrequent over the years; in 2010 Chief Michael Schirling said that the idling ordinance is not “high on our radar.” While city parking officers wrote 55,689 tickets in Burlington in 2013, according to BPD records, idling citations over the past seven years totaled 81, including only eight last year.

Parking-enforcement manager John King tells Seven Days that his officers “don’t see a lot of violations that meet the three-minute time span.” Does this mean the violations aren’t happening, or that the enforcers of the ordinance don’t have the time — or the motivation — to “see” them? Bruce Bovat, spokesperson for the police department, points out that often violations of the ordinance aren’t clear-cut. “We address many more violations than we issue tickets for,” he says. “It all comes back to education.”

Former mayor Kiss thinks that the ordinance has always served just “to reinforce common sense” about idling. Jennifer Green, the city’s sustainability coordinator, asserts that the ordinance is there primarily to “offer an educational opportunity,” but admits, “we can do a lot more to use it.”

Mary Sullivan, communications coordinator for the Burlington Electric Department, was a key advocate for the 2009 ordinance changes and a member of the committee that helped draft the city’s new Climate Action Plan. She regrets the number of vehicles that she still sees idling around town. “Despite the signs, [people] seem unaware that it’s illegal to idle in Burlington,” she says.

Mayor Miro Weinberger agrees that the city could do more. “There are far more significant steps that can be taken to address … transportation-related greenhouse gasses in Burlington,” he tells Seven Days. However, none of the steps he suggests (more electric vehicles, less circling for parking downtown) directly addresses the idling problem.

City Councilor Rachel Siegel is a little more blunt: “Without meaningful action on climate change, all the other issues before us — even violent crime — will be irrelevant,” she says.

Burlington’s climate plan indicates that cars, trucks and buses produce 51 percent of the city’s greenhouse gas emissions. That’s a 24 percent increase since 2007. Granted, there is no way of knowing how much of that can be attributed to idling. But observable evidence around the city — and the police department’s own statistics on lack of enforcement — suggest that the message on those red signs isn’t really getting across.

There will be a screening of "Idle Threat: Man on Emission" on Thursday, February 13, 7 p.m., at Perry Hall Presentation Room, Champlain College, in Burlington. Q&A session to follow with filmmaker George Pakenham, as well as representatives from Idle-Free Vermont and the City of Burlington, to discuss local anti-idling efforts. champlain.edu/events

CORRECTION: The 2008 anti-idling campaign by middle schoolers mentioned below was not in Richmond, as this story originally asserted, but in Jericho, at the Browns River Middle School.