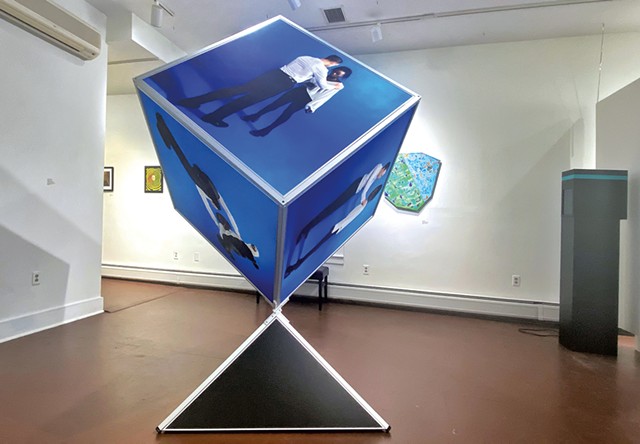 A new exhibition at Studio Place Arts in Barre might mess with your brain. Titled "Now You See It," it features art that "plays with perception of space and depth," according to a gallery description. And, typical for a group show — 19 artists, 26 pieces — the assignment was interpreted broadly. The mediums, too, span from high-tech to very low.

Upon entering Studio Place Arts, viewers can't help but be lured straight to the giant cube toward the back of the gallery. Rather excessively titled, "Outside the Box: Attitude—Hopeless Reassurance," by Matthew J Peake, features six large archival pigment prints, one on each of the cube's sides. A pyramidal base holds the cube aslant; every plane of the work is framed in aluminum rails. The construction is a study in geometry and balance, but it's the photos' intriguing human content that captures the imagination.

The artist's sleight of hand is so remarkable that the viewer is delighted to be "tricked." tweet this

The images are all of the same couple — a white man with his outstretched arms placed on the shoulders of a Black woman. He looks directly at her face; she looks down. Both of them are dressed in a white shirt and black pants. The backdrop is bright blue, a sterile setting that seems to glare at the psychological ambiguity here.

Peake, a former physician turned full-time artist, "plays" with the viewer's perception in two ways: Each photo shows the same couple from a different physical perspective, including overhead and underneath; and the pair's facial expressions and body language suggest a number of possible interactions, all influenced by parameters of gender and race. The piece is something of a triumphant cipher.

Stephen Rhoades' "Window Into Infinity" earns prolonged gazing, too, but for an entirely different reason: It's really trippy. From across the room, the structure seems like nothing more than a waist-high, pedestal-ish table. But its surface is topped with mirrored glass, and through this portal viewers see not only their own reflection but an inky-black interior with concentric rings of pinpoint lights that subtly shift in color. Viewers who look into this visual rabbit hole will encounter another optical illusion: The lights seem to rise into a mound, but, according to the gallerist, the interior surface is flat. Rhoades indicates that his construction's components are glass, wood, LEDs and Arduino, but surely a bit of wizardry is involved?

Chris Jeffrey's "Untitled" is a less-techy cousin to "Window Into Infinity," relying on the fetching combo of mirrors, fluorescent paint and ultraviolet light. Inside a black-painted box, Jeffrey has formed a mini theater of multicolored fluorescent rods whose only role is to glow. They look like bioluminescent sea creatures.

Carleen Zimbalatti is known for her abstract, repetitively patterned paintings that seem illuminated from within. Their superpower is masterful gradations of color; when the eye follows, the mind bends a little. Zimbalatti has three pieces in this exhibition. The large-scale oil on birch plywood titled "Continuum" presents a vermicular pattern that shifts in hues of blue over electrified yellow to yellow-green. The evolution is infinitesimally subtle and yet evokes a sense of movement.

Zimbalatti's "Mapping Geometry" is a similar feat but achieved with hand-dyed masonry cord in blue and yellow (colors now forever linked to the Ukrainian flag). She painstakingly adhered the cord tightly to the surface of an odd-shaped piece of birch — imagine a square with corners lopped and sides cinched in. Zimbalatti wound the cord such that the work's midsection appears to rise to a plateau. Only by looking at the wall-hung piece from the side can one be convinced it is flat. The artist's sleight of hand is so remarkable that the viewer is delighted to be "tricked."

Rob Hitzig's wall-hung polygons are not so much illusions as transformations. Over years of experimentation and patient sanding, painting and shellacking, he has achieved surfaces of alluring depth and complexity; it's almost hard to believe they started out as plain old plywood. In his two pieces for this exhibition, titled simply "Green/light blue diptych" and "Orange pink/green diptych," Hitzig has created quite beautiful abstract expressions.

Alexandra Bottinelli is also partial to transformation. In two petite works together titled "Honoring the Button/Circle," her alchemy involves olive green paint, encaustic and myriad white buttons. While they contribute an interesting, pebbly texture, the buttons are not merely surface decoration. The longer one looks, the more they resemble celestial bodies in a swirling cosmos. Bottinelli's pair of rectangles are like invitations to contemplate the unbroken circle, the infinite.

Clark Derbes' eye-befuddling sculpture, intriguingly titled "USA," sits on a table just inside the gallery entrance. It's essentially a parallelogram-shaped piece of wood that Derbes astutely painted to resemble the white "skeleton" of a rectangular box. The viewer "knows" the surface is flat but "sees" depth.

Perspective is everything — a truth that powers this entire exhibit.