What Would It Take to Develop Burlington's Waterfront Rail Yard? 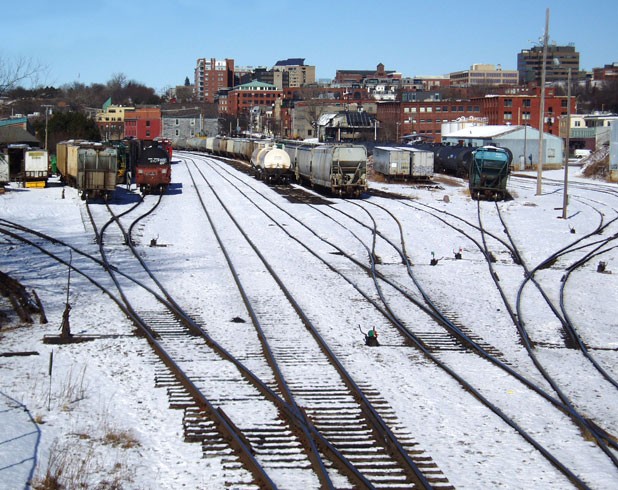 Killer location. A view to die for. Proximity to a growing economic powerhouse. Those are the factors motivating politicians, city officials and some neighboring business owners to turn up the heat on a long-simmering conversation in Burlington planning: Can and should the city pursue the costly and complicated relocation of its waterfront rail yard?

Absolutely, say some, such as Burlington attorney and longtime waterfront activist Rick Sharp. “It’s a big piece of wasted space at this point,” he says.

Not so fast, argue representatives of VRS. The company operates its second busiest rail yard in the state at the Burlington location. Every day, multiple trains — carrying freight such as road salt, heating fuel and construction materials — lumber into the yard amid the dull roar of engines and heavy machinery. As the northern terminus for the rail system, which operates 350 miles of track, the waterfront is an important hub for freight in Chittenden County and areas north.

But, when asked if the 9-acre rail yard, sited on land leased from the state, could ever relocate, VRS president David Wulfson concedes a maybe.

“Anything can be done with money,” he says. “I have no problem with relocating from this waterfront; however, I need another location to do our business that is not going to upset my customers. That’s what it boils down to.”

Wulfson could envision a partial relocation: keeping some of the rail yard’s services in the vicinity and moving the switchyard elsewhere.

“There’s been talk of baseball stadiums, restaurants, hotels,” he says. “That’s all fine, and that’s all stuff that’s going to generate revenue, but somebody needs to figure out what to do with us.”

Wulfson’s implication is that a relocation plan isn’t going to come from the rail yard itself.

It may not need to: The area has already been the focus of a handful of studies, most recently a 2010 analysis by the Chittenden County Regional Planning Commission called the Waterfront South Access Project. That particular study focused on improving transportation links to the area. More to the point, another CCRPC study in 2000 examined the possibility of relocating the yards, investigating potential locations in Williston, Shelburne, the airport industrial park and elsewhere. Cost estimates at that time ranged from $37 to $51 million.

In the past year, the rail yard cropped up in Plan BTV discussions, though Burlington city comprehensive planner Sandrine Thibault says it is too soon to say how that land might be re-envisioned. During Plan BTV design sessions this winter, residents suggested the rail yard might be used for a small-business incubator space or a bus hub. Others raised concerns — as yet unanswered — about whether the property would be classified as a brownfield, meaning developed, polluted and abandoned, and need cleaning up prior to redevelopment. Some riffed on the success of the Pine Street corridor to propose construction of more “work/live” residential units.

“There’s certainly great potential for that sort of development there,” says Thibault, though it’s too early to know what the city will prioritize. And, once priorities are in place, any plans are contingent on the rail yard.

“It’s really all depending on Would the rail yard actually relocate?” says Thibault. “If they do, great; it opens up that land and those opportunities. If they don’t, there’s not much that can be done.”

Another factor might complicate future development: Neighboring property owners such as Adams Real Properties, which owns the Independent Block on South Champlain Street (housing, among other things, Seven Days), say that the rail yard’s vicinity is a maze of property lines, fuzzy easements and unclear leases. Neighbors aren’t entirely sure where the railroad’s property ends and city property begins.

This leaves some Burlingtonians focusing on what are widely considered more attainable waterfront goals. Among them is Sharp, who was one of the leading activists blocking private development in favor of the Waterfront Park in the 1980s. He did so using the argument that this section of the waterfront was subject to the public trust doctrine, meaning the government had an obligation to preserve the space for public use. Condos on the lake’s edge were out, and the park was in.

Now, Sharp would like to see the city redevelop land occupied by a large industrial building south of the ECHO Lake Aquarium and Science Center that services the Lake Champlain ferry. He believes that also falls under the public trust doctrine.

That’s a similar priority to the one espoused by candidates in the mayoral race. Democratic candidate Miro Weinberger and Republican Kurt Wright have both spoken of building a top-notch marina. Weinberger imagines expanding the boardwalk and public space, adding shops and building boat slips — the kind of amenities, he says, that would add up to a bustling marina and a four-season waterfront.

Weinberger has also, in his economic-development plan, proposed investigating the relocation of the rail yards — but he says, hedging, that this is a much longer-term prospect.

“You’ve got a use there that’s not just going to disappear overnight,” Weinberger says. “You’ve got to make a pretty significant investment. It’s not clear that in this era of limited financial resources [that’s going to happen].”

As for Sharp, he says that, to his knowledge, the rail yard isn’t subject to the public trust doctrine, and development at the location wouldn’t block any existing views. That suggests to him that the location might be perfect for residential or hotel construction.

Setting aside the long-term vision of hotels or condos, some business owners in the area are left wondering about the aesthetic blemish that the rail yard leaves on its neighborhood.

Nigel Mucklow is the co-owner of New England Floor Covering and, with Brian Shea, of a four-building complex at the dead end of South Champlain. Though the complex’s primary entrance faces Pine Street, Mucklow complains that the western side of the place doesn’t show well to prospective tenants. It’s a hop, skip and a jump from the rail yard, and that end of South Champlain Street, Mucklow says, is a mess — “like some third-world country,” he suggests, comparing it to Bhopal, India. The yard is home to piles of rocks and rusted parts, and Mucklow says the rail yard attracts shifty trespassers. At the very least, he would like to see the site cleaned up.

Down in the yards, VRS CFO Mary Anne Michaels admits there’s a problem with trespassing. Several of the tanks that hold calcium chloride — which Vermont maintenance crews use in the summer to control dust on dirt roads — are covered with graffiti. Come warmer weather, though, the tanks will get a fresh coat of paint.

On a typical Monday morning, the yard is bustling. Michaels, a slight woman, picks her way across the railroad tracks in high-heeled boots. She has tagged along with Perry Martel, who oversees freight, claims and audits for the yard, for a quick tour.

They pass the tankers parked near the southern end of Battery Street, which carried clay slurry from Georgia to Vermont by rail. The clay will proceed by truck to the Sheldon-based RockTenn company, a producer of packaging and chip board.

A few tracks over, long rows of black tankers cart heating oil, kerosene and two kinds of diesel into the yard. There’s a cavernous — and slightly dilapidated-looking — shed containing a small mountain of road salt. At the southern end of the yard, an operator maneuvers train cars through the switchyard, compiling the southbound contingent of cars destined for Middlebury later in the afternoon.

Martel points out the swath of land between the tracks where, in the wake of Tropical Storm Irene, VRS loaded 130,000 tons of rock onto cars sent south to help rebuild Route 107.

After this rapid-fire tour of the operation, Michaels says, “There’s a lot of infrastructure here. When people talk about wanting to relocate the rail yard, well, it’s not an easy thing to move.”

Even proponents of relocating or redeveloping the yard are quick to note that it serves an important purpose. But Mucklow wonders if there is a solution that would preserve the freight industry while at the same time improving downtown Burlington.

“Just take major cities anywhere in the world,” Mucklow says. He cites Chicago and Toronto. Closer to home: Plattsburgh, which in 2009 opened a waterfront park after undertaking a major effort to relocate its own waterfront rail yard.

“All those railroad yards have been moved … outside of town,” Mucklow says. “That land becomes valuable.”