What Would Federal Cuts to the Arts Mean in Vermont? 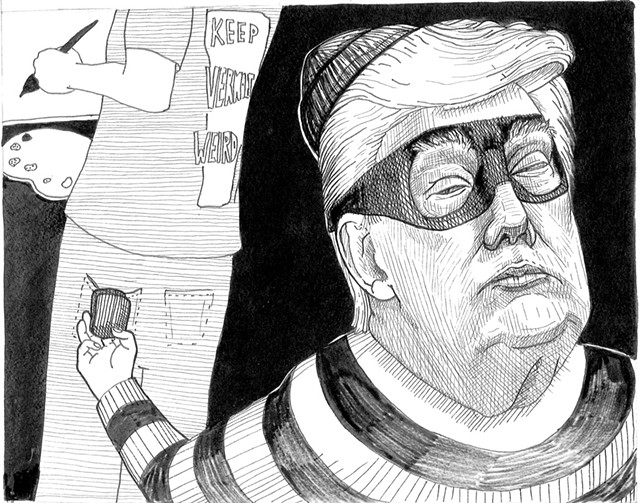 Last week, the Hill reported that President Donald Trump's transition team is considering privatizing the Corporation for Public Broadcasting and eliminating funding for the National Endowment for the Arts and the National Endowment for the Humanities. The moves, if enacted, would come as part of the new administration's plan to slash billions from the federal budget.

To get a feel for the reaction from arts organizations around the country, try stringing together a few of your favorite four-letter words — and maybe add an angry-face emoji or two. Like their counterparts in other states, Vermont's public arts and broadcasting groups have met the news with dismay and disappointment. But here's what reps from those groups aren't: surprised.

A conservative administration sighting the arts in its budgetary crosshairs is nothing new. For as long as the federal government has funded arts programs, fiscally flinty opponents have sought to eliminate them — typically under the banner of stemming "wasteful" government spending. President Ronald Reagan — an actor long before he entered politics — attempted, and failed, to privatize the NEA when he took office in 1981. In 1994, Republican congressman Newt Gingrich of Georgia, then the newly ordained speaker of the house, attempted to eliminate the NEA and NEH. Thanks to opposition from Democrats and moderate Republicans, he likewise failed — though Gingrich did succeed in cutting the organizations' budgets by 39 and 36 percent, respectively.

Despite the past resiliency of the NEA, NEH and CPB, a palpable uncertainty surrounds the financial future of those groups under an unpredictable Trump regime. Even though no cuts have yet been formally announced, arts and broadcasting organizations nationwide are steeling for a fight. Because, if brought to fruition, Trump's cultural offensive would signal a dramatic and damaging shift in how arts and public media are valued — or aren't — around the country.

The NEA was founded by an act of Congress in 1965. According to its mission statement, it is "dedicated to supporting excellence in the arts, both new and established; bringing the arts to all Americans; and providing leadership in arts education." The primary way the NEA achieves those goals is by funneling grant money to state and local arts organizations — roughly 40 percent of its $148 million budget, according to the National Assembly of State Arts Agencies. In turn, state arts councils distribute grants to individual artists and smaller arts groups.

In Vermont, that duty falls to the Vermont Arts Council. The VAC distributes an array of funds, ranging from $250 artist development grants to, for example, $27,000 to help Rutland's Paramount Theatre upgrade its speaker system. Money from the VAC goes to schools, artists and arts organizations in every corner of the state.

According to VAC executive director Alex Aldrich, the council receives about $715,000 annually from the NEA, which accounts for roughly 40 percent of its budget. But he explains that the actual value of that money is exponentially higher.

"I can't stress enough the importance of the federal, regional and state partnerships and how it impacts fundraising and the sourcing of funds for the nonprofit sector in the arts," he says.

Federal money from the NEA triggers state money, Aldrich elaborates. That is, the Vermont legislature appropriates one-to-one matching support for every federal dollar the VAC receives. As part of the agreement that created the NEA and the network of state arts agencies, states must provide such support — at a minimum — to maintain NEA funding. That effect snowballs down to a hyper-local level. Every NEA dollar in Vermont generates close to $13 from public and private sources, Aldrich says — the national average is about nine to one.

Despite those stakes, he isn't panicking.

"This is obviously something we're concerned about and are following closely," Aldrich says of the Hill report. "But until we know the specifics, it's just talk."

He adds that the arts sector is better prepared to handle the threat of defunding than it was in the 1990s.

"Part of that preparation has been to look at the relationship of the arts and public value," Aldrich says, "answering the question of what is the benefit of funding the arts with public dollars and taking the case to Congress.

"There is a substantial democratic approach to arts funding that didn't exist the last time we had these conversations in the early '90s," he continues. "While we are appropriately concerned as a field, we have now learned how to speak with one voice."

"While we are appropriately concerned as a field, we have now learned how to speak with one voice." Alex Aldrich, Vermont Arts Council tweet this

Cathy Edwards, executive director of the New England Foundation for the Arts, which also grants money to Vermont through the NEA, shares that sentiment.

"There is a lot of disappointment and anxiety," she says. "But this has always been part of our work: to remind people both of the value that we bring to the economy and the value-based proposition of our work in the arts and culture. We really believe in the power of the arts to connect us to joy and beauty, and to one another, and to the world around us."

In addition to giving grants to state arts councils, the NEA provides funding to individual local organizations, such as the Vermont Performance Lab in Guilford, Sandglass Theater in Putney and the Flynn Center for the Performing Arts in Burlington.

The Flynn receives a variety of NEA, VAC and NEFA grants totaling tens of thousands of dollars annually, as does the Burlington Discover Jazz Festival. Local schools receive grant money to bus students to the theater for matinée performances — 38,000 kids per year. Grant help, Killacky says, fosters more diverse and eclectic programming, too.

"Yes, we can sell out Sarah Silverman, and I'm really happy," he says. "But we don't plan to sell out a world-music event. And that programming is important to us, too. Grants allow us not to be a retail-based organization."

Killacky says the potential impact of cuts to the endowments and CPB run deeper than dollars.

"When you look at what the Vermont Humanities Council does with libraries around the state, the educational programming on Vermont PBS, the reporting at [Vermont Public Radio], what we're really talking about is the fabric of Vermont," he says.

"We're a country of fabulous institutions that have served the public good," says Holly Groschner, the president and CEO of Vermont PBS. "We've worked hard to create an environment where we can celebrate humanity and mankind through the arts and fact-based journalism that is nonpartisan and noncommercial. Anything that threatens that framework is dismaying."

Vermont PBS receives a little more than $1 million annually from the CPB. That's 17 percent of the station's budget. As with the arts and humanities councils, that money is leveraged on a state level. If CPB money evaporated, that would mean a lot of extra pledge drives.

And Groschner notes yet another cost: CPB helps to subsidize national programming. "To erode the stability of PBS would have direct ramifications for Vermont PBS," she says, "because we could not afford to duplicate the quality programming of the national network."

VPR would face a similar crisis. In addition to providing national content, CPB picks up the tab for expenses such as music licensing.

VPR typically gets $600,000, or 7 percent, of its annual funding from CPB — though, for each of the next few years, it will receive more than $800,000 as part of a multiyear $10 million capital campaign that CPB is matching. Losing CPB money wouldn't be a fatal blow to VPR, which is considered a midsize station. But it would likely necessitate noticeable organizational changes.

More subtly but just as impactfully, the privatization of CPB could endanger smaller public radio stations around the country. That would weaken the nationwide system, which in turn would weaken National Public Radio.

"Most medium and large stations won't go out of business," says VPR president and CEO Robin Turnau. "But I do worry about stations in rural, minority and depressed areas that are a whole lot more vulnerable and get more of their funding from the CPB. It would change public media and drastically reduce the communities that are served by public media."

If President Trump does attempt to gut the endowments and CPB, the proposed cuts would likely face opposition in Congress, where all three organizations historically have had bipartisan support. There it would need to clear the Senate Appropriations Committee, where it would face an imposing challenger: Batman.

Sen. Patrick Leahy (D-Vt.) is the ranking Democrat on the Appropriations Committee. Besides harboring a famous obsession with the Dark Knight, he has been a longtime defender and advocate of the arts and public media.

"It would be a huge mistake," says Leahy of the potential cuts, speaking to Seven Days. "When we can spend trillions on a useless war like Iraq, [we can spend money] on the things that can actually help make people better."

The senator adds that the combined budgets of the NEA, NEH and CPB are a relative pittance — about 0.02 percent of the federal budget. And he says he would push back against attempts to cut them in Appropriations.

"You'd be surprised how much can get done in the Appropriations Committee," Leahy notes. "A lot of the things I've done over the years, from [obtaining funding to support] Lake Champlain to banning the export of land mines, have been done through Appropriations. I'm actually looking forward to it."

The original print version of this article was headlined "Starving Artists"