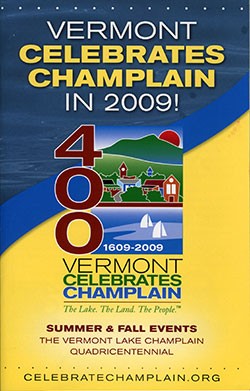 At Seven Days, the spell checker on our Macs does not approve of the word “quadricentennial.” Is it because the program is America-centric, and our still-young country has yet to toast anything 400 years old? And, by the way, have we figured out the proper gift category for a 400th anniversary? (Bone?) Hmmm.

Anyway, there’s a degree of confusion around Burlington about the word, too, at least as it applies to the impending festivities linked to Samuel de Champlain’s “discovery” of the lake that bears his name. Do you see “quadricentennial” in the name “Burlington International Waterfront Festival”? Neither do we. Nor does it appear in the official web address, celebratechamplain.org. Yet we’ve been tossing around the word “Quad” for months. Heck, we even designed some Quad-rified Seven Days T-shirts.

Turns out there’s a simple answer to the mystery. The Lake Champlain Quadricentennial Commission was created by the Vermont Department of Tourism & Marketing. So “the word Quadricentennial refers to the statewide celebration,” surmises Fran Stoddard, who will moderate a lunchtime panel-discussion series on Vermont’s future during the fest and is assisting with publicity. “Burlington’s event is part of the Quad but is also its own separate thing,” she adds. Though the scope of the Queen City’s fest alone is jaw dropping, there are loads of other goings-on around the lake basin, too — in Vermont, New York and Québec.

The recently released official program for “400: Vermont Celebrates Champlain” spells out the events, activities and exhibits on the Vermont side of the lake. You’ll find everything from historical battle reenactments to “authentic” 17th-century dinners to the Vermont Symphony Orchestra’s summer tour, entitled “The Lake Effect.”

The booklet’s five center pages enumerate the events of the Burlington International Waterfront Festival. Produced by Jay Craven and Burlington City Arts, it’s a doozy, spanning July 2 to July 14. The fest includes headlining acts such as Tony Bennett and Steve Earle and The Roots, an original dance production choreographed by Heddy Malaam, a European-style vaudeville circus, a food fest, a fine-arts fest and more. So much more. While many events are ticketed, scads of things are free.

Remarkably, casual conversations with non-media types reveal that at least some Burlingtonians have no idea there’s a tsunami of Quad stuff about to break on their shores. Over the next two weeks, we’ll be previewing many of the upcoming acts, as will every other media outlet, no doubt. We respectfully suggest you read all about it, and plan to participate. After all, a 400th anniversary only comes around once, and even festival-phobic curmudgeons can find something to enjoy in this one.