What Music Is Playing Where at Art Hop 2021

The first time I stumbled into the South End Art Hop was one hell of a night. Having only moved to town a month or so prior, I was unaware that, for one weekend a year, Burlington's South End would turn into a series of block parties featuring stunning local art, great Vermont music and that coolest of currencies: weird stuff.

It's the weirdness, or perhaps the randomness, of the Art Hop that has always attracted me to the event. The South End Arts and Business Association knows how to throw a festival, but magic can be found by just wandering around, bumbling into some studio you hadn't known existed.

In addition to finding cool visual art, I've seen many bands for the first time at the Art Hop. The musicians might be surrounded by industrial materials or blank canvases, or stuffed into a room that smells like pottery. There's something special about discovering music like this.

Of course, more conventional venues hop on the bandwagon over the weekend, too. What follows is a stroll through the offerings known as of this writing. You can, as Aleister Crowley put it, "do what thou wilt."

Friday has traditionally been the more entertainment-heavy night of the Art Hop, but in recent years, more music has popped up on Saturday night, as well. 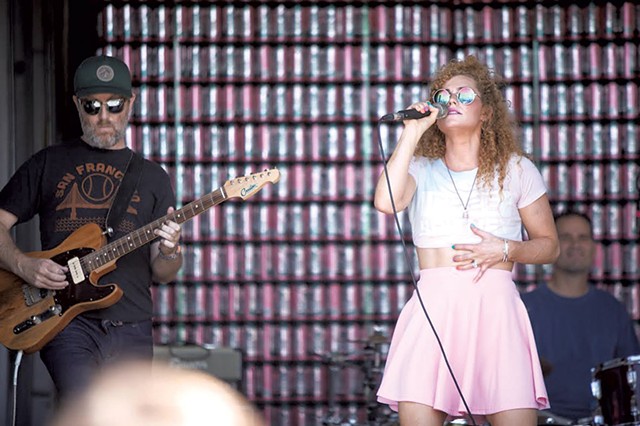 Going north to south, let's start with the Democracy Creative studio (266 Pine Street). The space will host an event titled "I AM YOU, YOU ARE ME, WE" on Friday night. Visual artist liza_s_art will collaborate with a series of DJs, starting with Radu at 5 p.m. DJ TwoSev will follow, then DJ Taka at 8 p.m. The show will culminate with a set from rapper Heady Betty.

As in past years, Citizen Cider (316 Pine Street) will host an artists' market in the parking lot on Friday from 6 to 10:30 p.m. and Saturday from 1 to 5 p.m. Danny & the Parts will kick off the tunes on Friday at 6:30 p.m. with their own brand of Americana, followed by soft-rockers Pontoon.

Local music fans wondered about the fate of ArtsRiot (400 Pine Street) after its sale last year. Would music still be a part of the operation? Since opening in 2013, the club has hosted some of the best music of Art Hop weekend.

New owner Alan Newman seems poised to continue the tradition. DJ Cre8 will spin records outside on the deck on Friday starting at 6 p.m., then surf-rockers Barbacoa will hit the indoor stage at 8. Hip-hop acts Suspect Behavior and Rivan C. will close out the night.

Saturday's highlights include what Newman called a "visual show" from artist Eyelingual at 2 p.m. and a closing set at 9:30 from roots rockers the Wormdogs. ArtsRiot will also host an artist after-party on Sunday at 4 p.m. if you want to hobnob with the talent.

A different sort of musical art will take place just down the street at Sterling Furniture Works (422 Pine Street). Studio resident and luthier James Herbert will offer a clinic, showcasing some of his handiwork, all weekend long.

Herbert also makes ukuleles and banjos, so if you're looking for something with strings, do visit Sterling during the Art Hop.

Find more off-the-beaten-path music-related programming at Big Heavy World (4 Howard Street, A-8), next to the SEABA office. Executive director Jim Lockridge is eager to share a few new projects with the local scene.

"We'll be unveiling a 43-foot-long mural made up of photos of over 200 local musicians," Lockridge said. He and photographer (and Seven Days contributor) Luke Awtry took the photos during sessions of "Rocket Shop Local Music Radio Hour," a weekly program on 105.9 FM the Radiator.

Adjacent to Big Heavy World's studio, the Tiny Museum of VT Music History will hold a grand opening on Friday at 5 p.m. The museum is a long-held passion project for Lockridge. He's particularly excited to debut a display of the late, great Big Joe Burrell's saxophone, as well as a table top from legendary Burlington venue Club Toast, which closed in 1998.

If you want to plant feet in one place with a beer, Switchback Brewing (160 Flynn Avenue) obliges each night of the Art Hop. Reggae act Satta Sound will fire up on Friday at 6 p.m. On Saturday, California bluegrass artist BanjerDan will take the stage from 3 to 5 p.m. On Sunday from 2 to 4 p.m., local group Bad Accent will wrap up the weekend with originals and world-music covers.

The original print version of this article was headlined "Auditory Arts"