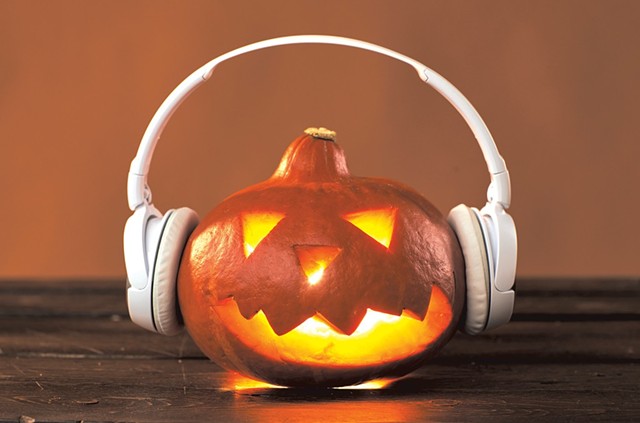 As the nights grow chilly and the green leaves become tipped with harvest yellows and electric oranges, one can almost feel Halloween in the air. Whether you're already building a boo-worthy playlist or decking out your porch in fake cobwebs, the October holiday is all about creating fun, spooky moments. And nothing brings out the fear factor faster than the thrill-inducing music in scary movies, from Goosebumps and Coraline to older-kid favorites such as Beetlejuice and Gremlins. We can all pick out "scary" music when we hear it. Why? Because we feel it.

Without scary music, scary movies would elicit a lot fewer gasps, jumps and half-covered eyes. Take out the rattling cymbals and percussion when the demonic twins appear in The Shining or the slow plodding orchestra pulse as the shark's fin cuts the water's surface in Jaws, and our nervous system might not know it's time to feel afraid.

But what actually makes music feel frightening? After all, it's just a collection of notes, right? Why should some combinations feel scarier than others? Here's a kid-friendly breakdown of what makes sounds spooky.

In the Middle Ages, there was even one interval, the augmented 4th (try playing an A and E-flat together on your piano) that came to be known as the "Devil's Interval" because of the eerie feeling it evoked.

Pitch, whether the notes are high or low, is another factor. Our ears are most comfortable with sounds in the middle range of the piano keyboard, where the human voice naturally exists. When very high or very low sounds take center stage and get turned up, as they often do during frightening moments, we naturally react, finding the sound shrill or unpleasant.

We all know that scary sounds are often sudden. Screams, roars or breaking glass come out of nowhere, making us jump. In a love story, the music takes us by the hand and leads us, the orchestra swelling grandly, cueing up the big kiss. By contrast, scary movies use sounds and music to keep us off balance and unsure of what's coming next, making themselves deliberately unpredictable.

Scientists have seen similar patterns in nature. When studying marmots a few years ago, biologist Daniel Blumstein noticed that when the animals were in distress, they called out in nonlinear, unpredictable patterns to communicate something bad was about to happen. The same thing happens in movies. Is it possible that composers are inspired by the animal kingdom?

Of course, half the fun, or half the terror, of watching scary movies is the sense of nervous anticipation we feel waiting for something to happen. We know it's coming; we just don't know ... quite ... when. Boo! Works every time. Why? Anticipation is actually serious mental work that stresses us out and puts us on edge.

As an experiment, try watching a favorite thriller on mute for a little while and see how it feels. Or watch one of many reimagined movie trailers where happy music is plugged into a scary movie, or scary music is plugged into a happy one. For fun, try searching "If Frozen was a horror movie" on YouTube and marvel at how a familiar movie now feels totally different.

Music has tremendous power over our emotions, and perhaps no one knows this better than the clever composers behind the musical scores in our favorite frightening flicks.

To round out our journey into scary sounds, here's a playlist to help make your family's Halloween season fun, exciting and just a bit spooky.