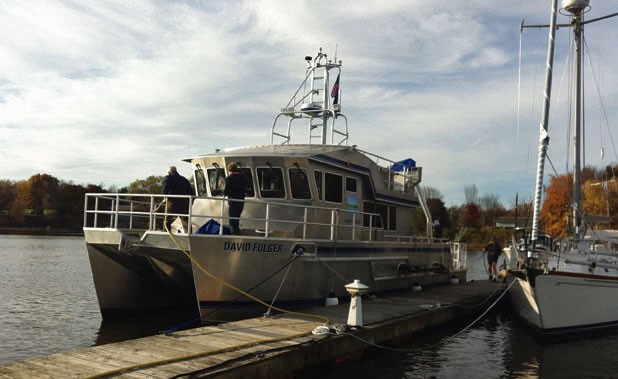 .The engines of the David Folger hum into action, and a few moments later the ship glides away from its dock at the Point Bay Marina in Charlotte, Captain Rich Furbush at the helm. It’s a warm, sunny day in late October aboard what is without a doubt the most sophisticated research vessel ever to cruise Lake Champlain.

At 435 square miles, Lake Champlain is the sixth-largest lake in the United States — yet, compared with the Great Lakes, it remains understudied. But not for long, if Middlebury College’s brand new, $1.5 million Folger has anything to do with it.

A small gaggle of Middlebury students, under the watchful eye of geology professor Tom Manley, scurry about on the back deck preparing for the day’s studies. Furbush ramps up the speed to a comfortable 16 knots — or roughly 18 miles per hour — and cuts a path west. Sophomore Mika Tan is fiddling with the on-board navigational system, plotting the course for the afternoon’s travels.

“We’re on site,” she calls out a few minutes later, and the crew gets in gear. This afternoon, students are studying circulation currents near Diamond Island, west of Kingsland and Porter bays. They’re dropping “drifters” and “drogues” — floating PVC pipes outfitted with GPS units — to track surface and underwater currents.

“The water movement of this lake is extremely dynamic,” says Manley. “We know a little bit about it, but there’s so much more to learn.”

And it’s just the tip of the iceberg when it comes to the R/V Folger’s capabilities. The state-of-the-art vessel arrived on Lake Champlain in early September, and Middlebury College dedicated its new floating laboratory earlier this month. Primarily the brainchild of husband-and-wife geologists Tom and Pat Manley, the ship is equipped with some of the most advanced oceanographic equipment available — including a remote-operated submarine outfitted with a camera, high-tech current profilers and extremely precise tools for mapping the lake floor.

The twin-hulled catamaran is 45 feet long and can carry up to 18 students, plus a professor, captain and first mate. It’s fast, too — it can make the trip from Charlotte to the Missisquoi Bay in a comfortable three hours, the same time it takes the University of Vermont’s R/V Melosira to make that trip out of Burlington. And it’s a floating smart classroom, outfitted with six computer stations where students can process data on the water.

The Folger marks the latest advancement in Middlebury College’s lake studies program, which started when geology professor David Folger — the ship’s namesake — first began taking students out on the lake in the 1970s. Folger eventually left Middlebury to head the Atlantic Marine Geology Branch of the U.S. Geological Survey’s environment studies program, where he had a long and storied career.

But when Folger spoke about that career in a 1994 speech at Dartmouth College, it was a project at Middlebury that he chose to highlight. From 1973 to 1974, Folger and his students studied the water in Lake Champlain downstream from the International Paper Company plant in Ticonderoga, N.Y. Though they had virtually no funding, Folger and his students were able to prove that IP was responsible for pollutants being released into the lake — evidence that eventually supported a class-action lawsuit against the plant, which resulted in tighter standards.

More recently, the lake studies program has largely been the purview of the Manleys, who previously piloted students in the R/V Baldwin, which has since retired to the Lake Champlain Maritime Museum. The college purchased the former lobster boat in 1985 and retrofitted it for research — but, with the last upgrades more than two decades old, and the ship unfit for additional renovations, the Baldwin was due for a replacement.

“We’ve known for a long time that the Baldwin was starting to fail,” Pat Manley says. For years she and Tom daydreamed about what their perfect research vessel would look like. A few years ago, they started putting those dreams to paper when a grant from the Lintilhac Foundation funded a formal planning effort and feasibility study.

Harder to imagine than the ship’s design was where the money would come from; in the wake of the economic downturn, the college wasn’t signing on to underwrite an expensive research vessel. But in 2009, the National Science Foundation, backed by stimulus funding, announced it would dole out grants to reinvest in academic infrastructure. With the feasibility study already complete, Middlebury was in the perfect position to apply. The following summer the Manleys learned they’d been awarded $1.7 million to upgrade their so-called “floating laboratory.”

What followed were two years of planning in earnest. The college convened a boat-building committee and began drafting plans for the Folger. Middlebury contracted with a boat builder in Washington State to build the vessel — and then, this summer, the boat made its epic journey home.

The first leg carried her 6700 nautical miles down the west coast aboard the cargo ship Panthea, through the Panama Canal and on to Port Everglades, Fla.

It wasn’t all smooth sailing. The biggest problem: The shipping company contracted to transport the boat by cargo vessel announced unforeseen delays — which ultimately set back the Folger’s arrival by two months.

In Florida, Furbush, Tom Manley and college electrician Chris Goodrich took the helm to pilot the Folger north to Vermont on the open seas and Intracoastal Waterway. The crew departed on August 22, and the 20-day trip brought them home to Vermont the day before fall classes began.

“It was not leisurely,” Furbush says.

And the hiccups haven’t stopped. The crew is still waiting on the vessel’s official certificate of inspection from the U.S. Coast Guard. Without that document, the Manleys can take out only six students at a time, even though the Folger was built to accommodate three times as many.

So on this October afternoon, the students are still scrambling to get their sea legs; because the ship’s capacity is restricted, some have only been aboard the Folger once or twice before. They’ve designed the day’s experiments ahead of time, plotting out where they’ll drop drifters and drogues and where they’ll collect baseline data on currents, temperature and depth. But they’re slow to get the instruments into and out of the water.

“This is a nice day,” says Furbush from the wheelhouse. “There’s time for mistakes.”

Before taking on the part-time job of the Folger’s captain, Furbush spent more than 40 years at UVM piloting its research vessel, the R/V Melosira. He’s an old hand on research boats, but he says the Folger is by far the most sophisticated ship he’s piloted. “You can run the whole boat with a mouse,” he says, gesturing to the fleet of monitors and electronic equipment. But, just in case, there’s a gleaming silver captain’s wheel for him to grab.

Middlebury College has high hopes for the Folger. The ship’s high speed means researchers can now reach the far regions of the lake. More college classes than ever before — as well as local K-12 teachers — will have access to the lake and top-notch training and learning opportunities.

Pat Manley says the Folger will also help chip away at the many unanswered questions about Lake Champlain’s geology, biology and chemistry.

“My big thing is, you’ve got to know how your system’s working now,” she says. It’s fine to make models of the variables that could affect the Lake Champlain basin in the years and decades ahead — changes that would significantly influence the population that relies on the lake for drinking water, recreation and sewage treatment. But good science needs a baseline, and that means studying the nooks and crannies of the lake.

“If you don’t know what you’re starting with, it’s a little iffy as to what you’re going to end up with,” Pat Manley says.

Obtaining the new vessel is a coup for the region, according to Meriel Brooks, a biology professor at Green Mountain College and the codirector of the Lake Champlain Research Consortium, composed of seven colleges and universities in Vermont and New York. In their previous research, Brooks says, the Manleys have solved many mysteries about the lake’s physical characteristics, hydrodynamics and sediments — features that have ended up factoring into the work of chemists, environmental scientists and biologists.

“They’ve brought these technologies that are used in the open ocean and very large lakes to Lake Champlain, and really enhanced the understanding of the water circulation in the lake,” Brooks says. In this way, the Manleys have set the “backdrop,” she says, for more research on the lake.

What’s more, Brooks hopes their research will shed light on how to tackle the serious problems facing Lake Champlain, particularly water pollution and toxic algae blooms caused by runoff of nutrients like phosphorus from development and dairy farming. That said, Brooks is quick to say that science alone — even coming from a high-tech vessel — won’t solve Lake Champlain’s woes.

“A lot of the real issues aren’t scientific here. They’re much more zoning, and what we accept and allow for each other,” she says. “I tell this to my students every year: ‘The science can tell you what happens if you do this or that. It can’t tell you whether or not you ought to do this or that.’”

But figuring out the science is a good first step. Aboard the Folger, the students plug GPS units from their drifters and drogues into the on-board computers and crank through data generated just moments before on the open water.

Most say they don’t have ambitions of becoming marine scientists. But as the Folger cuts a path back toward Charlotte, they’re earnest about what freshman Teddy Gold calls the rare opportunity to do original research at an undergraduate college.

“To have access to this boat and this lake is pretty amazing,” he says.