Vermonters take to the river … with snorkel masks 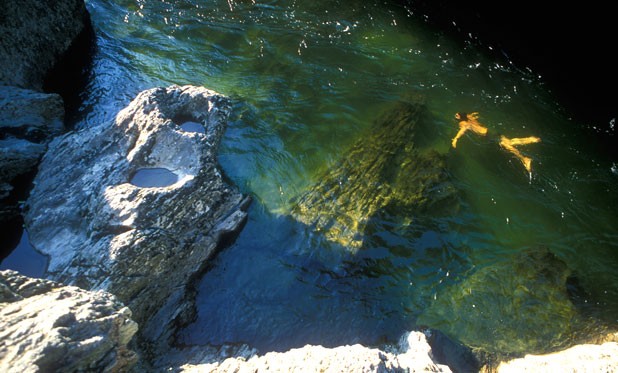 It’s unlikely anyone will discover colorful coral reefs or schools of tropical fish in Vermont’s rivers anytime soon, but that doesn’t rule out snorkeling as a fascinating way to explore the region’s many natural watercourses. While river snorkeling is by no means destined to become the next Olympic event, some Vermonters can’t seem to get enough of it — and for good reason.

“It’s the closest thing to the feeling of flying that I’ve ever experienced,” says Moretown resident Ben Falk about his river-snorkeling habit. “And moving downriver, I think it’s about as close as you can get to a zero-gravity experience.”

Embracing Vermont’s warmest season, Falk, 32, who once lived and snorkeled in the Bahamas, frequently pedals his bike down to one of the many small gorges along Vermont’s Mad River. August is perhaps his favorite month: The heavier rains and higher river levels of early summer are over, but the warmest water and air temperatures are still around. Often accompanied by friends, and clad in no more than his snorkel mask and swim shorts, Falk starts by working his way upstream, swimming and moving from one calm pool to the next. Where there is some current, he climbs along the river bottom with his hands and feet, exploring the river basin’s underwater world.

“The movements upstream are incredibly similar to those used when rock climbing … but instead of gravity, it’s the river pushing against you,” says Falk.

When not in the river, Falk spends most of his time farming, and designing and building “whole human habitats” — that is, regenerative food-, soil-, energy- and fuel-producing landscapes and eco-conscious buildings — for schools, community organizations and private landowners through his business, Whole Systems Design. Underwater, he sees “the results of what our communities are doing on the land,” Falk says. And it’s not all good. After a rainstorm, evidence of excessive soil erosion and water pollution is hard to miss. These effects keep him out of the water for a few days, but they also inform his design/build work, which focuses on landscapes that minimize erosion.

“It’s amazing how quickly many of our rivers will clear up,” says Falk, “but it’s alarming how much precious soil and pollution we’re letting run into our rivers.”

After moving upstream for a while, Falk turns downriver, spreads his arms and allows the water to carry him. He peacefully admires trout, hatching insects and the artful work of geologic time etched into the riverbed. Holding his breath, he sometimes explores deeper underwater caves and evidence of old mills, or he veers into eddies behind rocks to observe passing trout. One, Falk says, recently approached and allowed him to stroke it with his hand.

“It’s incredible to be traveling through this environment so effortlessly and silently — exploring in the river, rather than on or above the river,” says Falk. “It’s a quiet, green and beautiful world.”