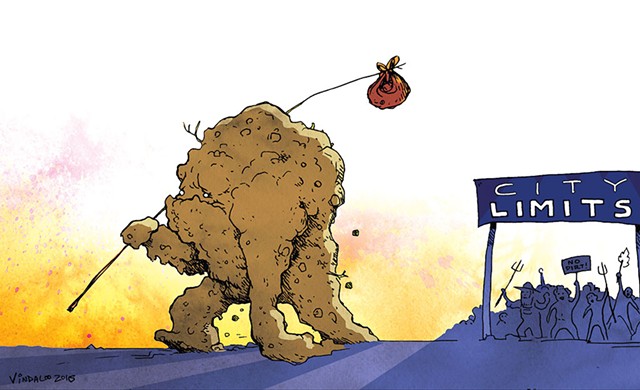 It changed the plan to redo Burlington's downtown mall and delayed construction of the new bus station. It ratcheted up costs of renovating the bike path and has complicated the transformation of Burlington's old Eagles Club into a Champlain College dorm.

The culprit in all of these cases: dirt. Throughout the city, municipal departments and private developers have had to pay six-figure bills to dispose of "urban soil," as it's called, which contains a certain amount of pollution. Burlington Mayor Miro Weinberger has expressed concern that it could undermine his goal of promoting downtown development over suburban sprawl.

Although environmental regulations are no stricter, "We have three to five years of projects either being stalled, being canceled or incurring significantly increased expenses to deal with these soils," said Brian Dunkiel, a lawyer who has counseled Burlington on its dirt problem. His theory: The confluence of a number of big projects — in particular, publicly funded ones — brought the issue to the fore. "These projects were being required to clean their soils to a level that was cleaner than soil next door," he said.

Like other postindustrial cities, Burlington has had to work around serious contamination as it rebuilds. Exhibit A is the Pine Street Barge Canal, a swampy area along Lake Champlain that was designated a federal Superfund site as a result of pollution from a coal-gasification plant that operated into the mid-1960s. Chemical solvents from more contemporary enterprises, such as dry cleaners, have also seeped into soils over the years.

The dirt currently under debate is less toxic and may not be traceable to a particular past polluter. It often contains arsenic and lead, metals that are naturally occurring but also come from the residue of paint, fertilizers, gasoline and other products. Polycyclic aromatic hydrocarbons — the term for a host of chemicals released into the air from activities including the burning of coal, gas and wood — commonly settle in soil as well.

Although they're considered less dangerous than polychlorinated biphenyls, aka PCBs, now-banned man-made chemicals, PAHs aren't harmless, either. Some have been linked to cancer, and, when not properly contained, they can leech into and degrade water sources.

"Lightly contaminated" is how Department of Environmental Conservation Commissioner Alyssa Schuren describes this particular kind of soil. The mayor calls it "not completely clean."

To get sick from urban soil would likely require daily exposure for a prolonged period of time. Even so, "You want to make sure that people are not exposed to contaminated soils. Period," said Sandra Levine, a senior attorney with the Conservation Law Foundation. "The ways you can do that vary."

Traditionally, the state has done this by setting acceptable levels for contaminants — one for residential properties and another, higher one for industrial sites. If soils excavated during construction projects exceed those limits, they're supposed to be treated as solid waste. If the soils contain more serious contaminants, such as PCBs, stricter regulations come into play.

Unless the dirt can be reused on-site, it gets trucked to a lined landfill. Vermont has just one, inconveniently located in the Northeast Kingdom town of Coventry. Contaminated soils are sometimes taken to the Clinton County landfill in New York instead.

The transportation and dumping costs are steep. That's a problem for populated places such as Burlington, where much of the soil surpasses the state's limits for contamination.

In Weinberger's view, this is "not a common-sense use of dollars or of landfill space."

Don Sinex, the New York developer who plans to overhaul the floundering Burlington Town Center on Church Street, was initially going to build an underground parking garage. He ditched the proposal in part because, according to his estimate, sending the 200,000 cubic yards of excavated soil to a landfill would have cost $20 million. Sinex didn't actually test the soil, but he believed he could pretty well guess what it contained.

Feet away from the Burlington Town Center, the Chittenden County Transportation Authority is building a new downtown bus station. When tests came back showing the soil "slightly above" the state's allowable threshold, the public transit system had to spend $273,000 to truck the dirt to Coventry. That expense ate up half the contingency budget for the $7.7 million project and cost a month of time, said project manager Stephen Carlson.

After a drawn-out legal battle, Champlain College finally won approval to build a dorm for nearly 300 students downtown on the site of the former Eagles Club. Last February, college and city officials held a triumphant press conference announcing a settlement. A year later, people have begun asking why ground has not been broken. It's largely because the early delays caused the developer to drop out, leading the college to take control of the project, explained senior vice president David Provost. But the college is also trying to figure out what to do with the contaminated dirt on the site: all 8,000 cubic yards of it.

The cost to truck it to Coventry would be roughly $800,000. "That's real money," said John Caulo, an associate vice president. Caulo also noted that the City of Burlington, which previously owned part of the site, would be on the hook for roughly half the cost.

Queen City officials have already spent nearly $400,000 to dump contaminated soils excavated during bike path renovations last summer. That soil, stockpiled for months at Leddy Park to the dismay of residents, also contained PCBs. It was trucked to the Coventry and Clinton County landfills.

The problem isn't confined to Burlington — St. Albans, for example, has also encountered high disposal bills as it redevelops its downtown.

But why has this only recently become the subject of public debate? "I have asked that question in many different settings and never gotten a satisfactory answer," Weinberger said.

Schuren suggested Weinberger himself is the reason it's coming up now: "The City of Burlington ... has really driven the conversation about this."

Last year, Weinberger and others successfully lobbied for a change — not the most glamorous political achievement, but an important one for a mayor who's made infill development a cornerstone of his agenda.

What he got was Act 52, which requires the Agency of Natural Resources to come up with permanent rules to govern contaminated soil by July 2016. The DEC is leading that work. In the meantime, the new law also allows developers building in downtown areas to work with the agency to find alternatives to the landfill. One option previously unavailable: They can reuse the soil at a different site as long as the dirt being moved has lower or equivalent levels of contamination as the dirt already at the relocation site.

It's unclear how helpful this temporary fix has been. CCTA tried to take advantage of it, but, according to Carlson, the testing requirements to prove that the soils at a new site were similarly contaminated were so "onerous" that it proved cheaper to just truck the CCTA's soil to Coventry.

Caulo said Champlain College is still "trying to find a practical solution" with the DEC. Weinberger also failed to persuade the department to consider alternatives for bike path soil, which didn't technically fall under Act 52 because it contained PCBs.

In its willingness to revisit the rules, the state has shown sympathy for the city's concerns about cost. Schuren, however, hinted during an interview last week that officials would come down on the side of caution in developing rules: "Our top goal is to ensure that public health and the environment are protected."

Dunkiel's first impression of a recently released draft of the rules suggests ANR isn't ceding much ground. The agency, he wrote in an email, "is using its considerable discretion ... in a manner that is likely to add considerable costs to cleanups and redevelopment projects."

Assuring that he wasn't speaking on behalf of any clients, Dunkiel went on to suggest that ANR "should have the burden of demonstrating with sound science that the requirements are necessary to protect human health and the environment."

The rules aren't final yet, and stakeholders have the opportunity to comment on the draft. Dunkiel said a lot will ride on the results of a pending study, which he described as the "linchpin of whether or not we make progress and rationalize how these types of soils are managed in Vermont."

The DEC has taken soil samples from urban and rural regions around the state. The goal is to figure out what the normal levels of arsenic, lead and PAHs are — called "background levels" — and set new thresholds based on them. Currently, the samples are being analyzed at a lab run by the U.S. Environmental Protection Agency, Schuren said. Depending on the amount of variation among the different samples, the department may decide to establish one background level or multiple regional levels.

Burlington will have plenty of opportunities to get acquainted with the new rules when they are set. Work on the bike path, scheduled to start this spring, is expected to unearth more urban soil. So is the Champlain Parkway, a long-contemplated 2.5-mile road that will cut through the city's South End. According to Public Works Director Chapin Spencer, the city will likely dig up about 7,000 cubic yards of soil with elevated levels of arsenic and PAHs. If it has to take the dirt to Coventry, the landfill cost could be as much as $1.5 million, according to Spencer's preliminary estimate. His team has met twice with DEC staff. He said, "I expect us to be meeting many more times."