What Is the Large Metallic Structure at the Border in Highgate? | WTF | Seven Days | Vermont's Independent Voice

What Is the Large Metallic Structure at the Border in Highgate? 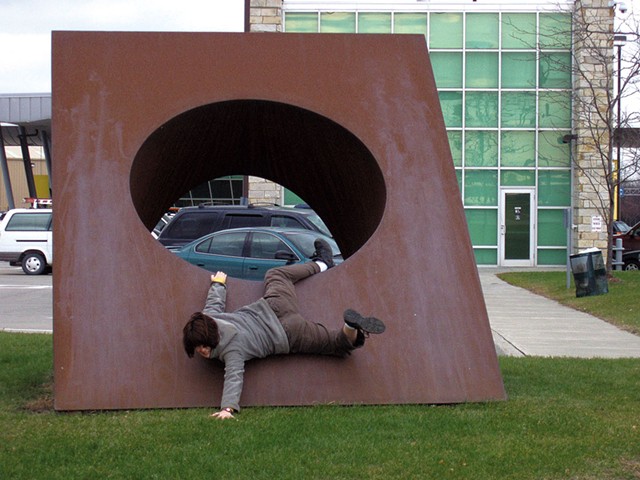 Most travelers entering Vermont from Québec at the U.S. port of entry at Highgate Springs continue southbound on Interstate 89 immediately after answering the barrage of questions from U.S. immigration and customs agents. But those who take a short breather just south of the border may notice a large metallic structure located near a small parking area. The rust-colored object, shaped like a 45-degree cheese wedge on its side, has a large hole in the center but no markings or inscriptions. Set into the ground near the base of the structure is a black marble ellipse or oval.

Bill Porter of Williston emailed us recently to inquire about what he characterized as a "Stonehenge-like" installation because, he suspected, it has some spatial relationship to the solstice. He wanted to know what it is, where it came from and who made it.

Porter assumed correctly that the artwork has a seasonal alignment, though his timing was off by three months. Titled "SUNFIX for Judy," by Burlington sculptor Kate Pond, the piece is oriented around not the solstice but the equinox, the twice-yearly solar event when day and night are of equal length.

On those two days of the year, when the sun reaches a 45-degree angle in the sky, its light perfectly illuminates the marble ellipse. That seems apropos, given that the sculpture, commissioned in 1997 by the U.S. General Services Administration for its then-new port of entry building, is situated on the 45th parallel, exactly halfway between the equator and the North Pole.

Seven Days learned in a recent interview with Pond that the internationally acclaimed sculptor owes her decades-long fascination with the solar calendar to her years of working with Vermont schoolchildren.

Pond, 81, has been creating public art for more than 40 years. Her installations are found all over the state, including "Steelhead" (1981) in Winooski Falls Park, "Kiss II" (1981) at Fletcher Free Library in Burlington, "Campus Dial" (1988) on the Johnson campus of Northern Vermont University and "Suncircle" (2000) in Willow Park in Bennington. Many of her pieces are sundials or mark the solstice or equinox.

Pond, who grew up in Montpelier, admits that she wasn't a science- or astronomy-oriented child. Her fascination with the movement of heavenly bodies began in the 1980s when she was doing art residencies in Vermont's public schools.

During one such residency with eighth graders at Williston Central School, Pond recalled, the principal asked her to create an art project incorporating math and science. A sundial seemed like a logical choice.

"It gave me a reason to be interested in science," she explained, "and it gave students a reason to do the necessary math in order to figure out how it all worked, rather than learning math in a dry way."

Pond says her biggest work is the World Sculpture Project, a series of five sculptures built between 1993 and 2007 at various latitudes around the globe. Her first, "Zigzag," was installed in 1993 in Stanstead, Québec. Subsequent ones went up in Oslo, Norway; Sendai, Japan; Honolulu, Hawaii; and Richmond, New Zealand.

The artist's preferred medium is corten, a form of steel first used in the 1950s to construct bridges and later adopted by artists. Though not all of her works are large, Pond began working with massive structures while studying under Paul Aschenbach, a now-deceased art professor at the University of Vermont.

Aschenbach is well known, in Vermont and elsewhere, for the "Sculpture on the Highway" project he launched a half century ago. Born from three international artists' symposia in Vermont — in 1969, 1971 and 1990 — it resulted in 18 massive sculptures created by 11 artists from nine countries. All were installed at rest stops along Vermont's then-newly constructed I-89 and I-91 interstates between Massachusetts and the Canadian border. "Sculpture on the Highway," which inspired copycats elsewhere, turned Vermont's two interstates into the world's largest de facto sculpture park.

Today, only 16 of the original 18 pieces remain, and they are at risk of decay failing the adoption of proposed conservation measures, according to Robert Hannum, owner of Arts Management Services in Montpelier. Hannum, who's been in art conservation for 45 years, was hired by the state to assess the "Sculpture on the Highway" pieces. Many of them are inaccessible because they're in now-closed rest areas or concealed by new vegetation.

"These pieces are marvelous," said Hannum, who moved to Vermont from Maine three years ago. "The good news is, most are in remarkably good condition for being 50 years old."

The overall goal isn't to bring the pieces back to their original condition, he explained, but to slow the natural decaying process. He put the price tag at $300,000 to $400,000, which would cover the expense of moving the works, building new foundations, removing graffiti, and fixing cracks in concrete and marble that worsen with Vermont's freeze-thaw cycles.

Though Pond's "SUNFIX for Judy" sits along I-89, it wasn't part of the "Sculpture on the Highway" project. It replaced one of the original 18 works, removed in 1972 by its creator, artist Clement Meadmore. Coincidentally, Pond assisted on his piece, too.

The "Judy" in the sculpture's name refers to Judith Brown, a fellow sculptor and mentor to Pond. "When I began to make sculpture in the '70s, she was the only woman I knew who welded and made sculpture in Vermont," Pond said. "We traveled to Greece, Portugal and Italy together. We did drawings in the mornings and went to look for beaches in the afternoons. She always looked for a 'sun fix' and tanned herself deep brown."

After Brown's death in 1992, Pond named the Highgate installation in her honor. The massive sun marker serves as a moving tribute in a place defined by motion and transition.

Got a Vermont head-scratcher that has you stumped? Ask us! wtf@sevendaysvt.com

The original print version of this article was headlined "What Is the Large Metallic Structure at the Highgate U.S. Port of Entry?"