What Is That White Dome on a Hill Overlooking St. Albans? 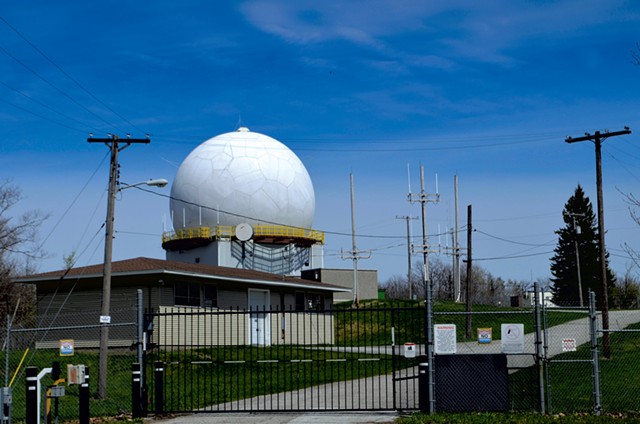 Travelers who drive north on Interstate 89 heading into St. Albans may notice a large white sphere peeking through the trees atop a hill just east of the highway. The geodesic dome is too large to be a cellphone tower and about 1,400 miles too far north to have any connection to Disney's Epcot. Longtime residents of St. Albans say it's been there for decades, and it's neither a weather station nor a space observatory. So WTF is it?

Short answer: It's Vermont's most visible remnant of the Cold War era, one that's still in use today, albeit for mostly civilian purposes.

The orb on the hill, described in a 1994 letter archived in the Saint Albans Museum as "God's own golf ball teed up," is a radome, or radar dome, used for tracking aircraft. It's the last remaining radome of five that once stood on Bellevue Hill, about two and a half miles southeast of St. Albans. All were part of a radar defense complex operated by the U.S. Air Force from 1951 to 1979. Its primary mission was to detect potential inbound Soviet bombers invading the continental United States by flying over the Arctic Circle.

At 1,310 feet, Bellevue Hill offers unobstructed panoramic views of the Champlain Valley, the Adirondacks and even Montréal on clear days. As far back as 1870, it hosted a lookout tower that was open to the public. But it wasn't until the end of World War II that Bellevue Hill became a site of electronic surveillance.

In 1949, the Air Force purchased 180 acres of parkland from the State of Vermont, 35 of which were developed into a base to house airmen at the facility. Records archived at the Saint Albans Museum indicate that construction of the "Bellevue Hill Federal Project," as it was called, began on May 8, 1950. According to museum records, not one local newspaper reported on the sale of the land or the commencement of construction — an inconceivable omission by today's standards.

Completed and fully operational by July 1951, the Saint Albans Air Force Station was home to the 764th Radar Aircraft Control and Warning Squadron. At its peak in the mid-1950s, about 400 airmen and another 20 to 25 civilians lived and worked on Bellevue Hill. At one point, the base had a military payroll of about $1 million and a civilian payroll of $380,000.

The base itself included barracks, a dining hall, a recreational facility and a noncommissioned officer club. Drive up the potholed Bellevue Carriage Road, and you can still make out the crumbling concrete remnants of some of the buildings. 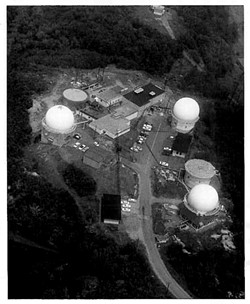 The Air Force station was one of more than 200 long-range radar stations throughout North America that provided security from nuclear sneak attacks. At any given time, 20 to 30 people sat at radarscopes in St. Albans around the clock, watching for incoming bogeys. Should an aircraft enter the radar's 250-mile radius without identifying itself, the Air Force could immediately scramble jets to intercept it.

Louise Haynes, a St. Albans native who now volunteers at the Saint Albans Museum, remembers a lot of young women from her high school dating airmen who were stationed on Bellevue Hill. She says her parents even rented apartments to some of the personnel once they were ready to move off base and settle in town.

Beginning in the 1970s, as civilian air traffic in New England increased, the Federal Aviation Administration began using the radomes, too. By the late '70s, however, the Air Force determined that the domes' technology was obsolete for defense purposes.

In February 1978, it announced that the St. Albans base would close the following year. An article in the St. Albans Messenger at the time indicated that when the base was finally decommissioned, on June 29, 1979, fewer than 100 airmen were stationed there, and the financial loss to Franklin County totaled about $2 million.

In 1981, the Air Force auctioned off most of the Bellevue Hill property for $200,000. Although there was talk in the mid-1990s of the FAA demolishing the last radome, ultimately it was kept in service and upgraded. Visitors to Bellevue Hill can still get within about 200 yards of the dome, which is now cordoned off with a security fence.

Ron Bazman, air traffic manager at Burlington International Airport, says the radome is still used by the Boston Air Route Traffic Control Center in Nashua, N.H., as a long-range antenna for tracking high-altitude aircraft. Because it turns at a much slower rate than the radar at BTV, it's not very useful for Burlington's arriving and departing flights.

Why aren't more Vermonters aware of the role that St. Albans once played in Cold War national defense? As Putney resident Richard Ewald wrote in a November 1994 letter to the Vermont Division for Historic Preservation, "The Cold War period in Vermont is currently neglected as too recent to seem 'historical.' Yet it is so long ago as to be nearly forgotten."

To prevent such historical amnesia, a nonprofit based in Bellefontaine, Ohio, is currently building the National Air Defense Radar Museum to commemorate the men and women who served in facilities like the one in St. Albans. Writes Gene McManus, a volunteer with the museum's association who served as an Air Force radar maintenance technician from 1956 to 1969, "To this day, little is known of this mission outside of the rapidly dwindling population of those airmen who served on these sites. Our mission, while not completely classified, was nonetheless little known and less understood by the general population, even [by] our own parents or spouses."

McManus hopes the radar museum will open in the summer of 2018.