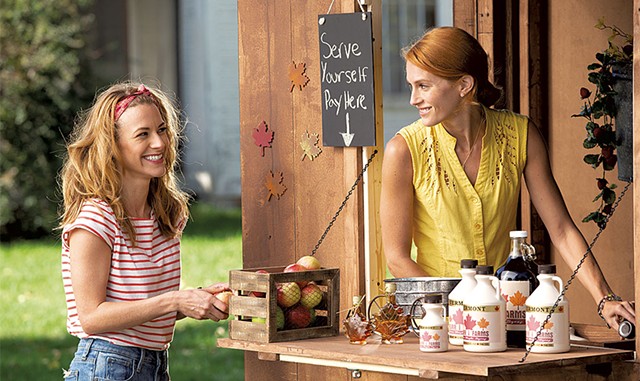 With all of its scenic beauty and historic architecture, Vermont should be a filmmaker's paradise. But, because the state lacks tax incentives for film production, few flicks are actually shot here.

Plenty of films still take place in Vermont, especially the made-for-TV holiday schlock churned out by the Hallmark Channel. A 2018 Seven Days story highlighted the tendency of those films to be set in the Green Mountain State and filmed elsewhere, much to the dismay of locals.

But be careful what you wish for. The indie rom-com Soulmate(s), which screens at Montpelier's Savoy Theater this week, takes place in Vermont and was shot here in 2018. A press release names locations in eight northern Vermont towns and bears the tagline "A Movie Celebrating Vermont, Made by Vermonters." The movie's Vermont-born stars and cowriters, Stephanie Lynn and Alexandra Case, no doubt intended it as a love letter to the state.

However, not only is Soulmate(s) as saccharine as anything on Hallmark, but the movie's insistence on relishing Vermont and its culture backfires in surprising ways. It imagines a bizarro Vermont full of parochial folks whose raison d'être is maple syrup.

Directed by Timothy Armstrong, Soulmate(s) is a female buddy comedy about townies Jessamine (Lynn) and Samantha (Case), who long for change while clinging desperately to their codependent dynamic. Their lifelong friendship is disrupted when Jess falls for recent flatlander transplant Landon (Mark Famiglietti).

Landon works for maple syrup conglomerate Peterson Maple, which has set up shop in town and is buying up family farms left and right. Even more egregiously, we're told, the company is hell-bent on destroying "the Vermont way" of syrup production by using a state-of-the-art factory rather than a traditional sugarhouse.

Fed up with her career as a notary public and local news blogger — she's paid for the latter occupation in banana bread — Sam wants to get an op-ed about Peterson's plans published in "the Vermont Times." Meanwhile, when she's not delivering newspapers by bicycle, Jess is busy running her family's maple sugar farm — a job that seems to consist solely of packing up a few quarts of syrup and delivering them to the farmstand.

If anyone should be ginned up to fight Peterson, it's Jess. But love clouds her judgment about the company.

Like most rom-coms, Soulmate(s) ends sweetly, with everyone getting what they want. It leaves a sour taste, however, for a number of reasons.

What Soulmate(s) gets right about Vermont

Let's start with Soulmate(s)' depiction of small-town fall festivals. In one scene, a small crowd scarfs up simple fare near a corn maze in front of a modest stage. Real-life Vermont comedian and musician Rusty DeWees performs with his actual music partner, fiddler Patrick Ross. The duo probably can't estimate how many similar gigs they've played.

DeWees' character, also named Rusty, owns the town's central gathering place, a country store (filmed at the Jericho Center Country Store). Lined with jars of penny candy, serving up maple creemees and doubling as a post office, it's a typical example of this Vermont institution.

Also accurate are the film's scenes depicting community dinners, which are shot in a low-ceilinged community center and show volunteers cooking comfort food and doling out hearty rolls in woven baskets.

Unfortunately, that's about it for what the film gets right.

What Soulmate(s) gets wrong about Vermont

Oof, where to begin? Let's start with some quibbles — the sort of things we might expect outsiders to get wrong, but not natives.

Landon lives on his boat on Lake Champlain. Since the film takes place in summer and fall, we can let that slide. But he doesn't indicate that his housing situation is seasonal.

Ben & Jerry's gets a few shout-outs. But the characters reference Peace Pops, which were discontinued in the U.S. by 2015 and haven't been marketed under that name since 2004. Currently, the ice cream maker offers Pint Slices. (Want a Peace Pop? You'll have to go to the United Kingdom.)

The characters' prickliness and abhorrence of "flatlanders" and people from New Hampshire is overblown. Yes, transplants are less common in small towns, and residents might be wary of outsiders. But the level of hate expressed toward them here is cartoonish.

What really derails the film, though, is its central theme of maple syrup activism.

Concerns about "big maple" aren't unknown in Vermont. In a 2015 cover story, this paper profiled a "mega maple operation" called Sweet Tree Holdings that had purchased 7,000 forested acres in the Northeast Kingdom and reportedly aimed to be the world's biggest maple producer. Locals were quoted expressing incredulity at its size.

But Sweet Tree wasn't buying up local sugaring operations, as depicted in the film. "It's not my understanding that anyone has come in and started buying up small family farms," said Allison Hope, executive director of the Vermont Maple Sugar Makers' Association, by phone. "I don't see one corporation coming in and buying it all up."

She went on to describe the diversity of Vermont's sugaring operations. Some consist of a handful of trees in a backyard sugar bush. Others are massive, with tens of thousands of taps. Some retail sap directly; others sell it to bigger companies. It's a diverse ecosystem not in danger of being upended by one monolithic outsider.

The hyperbolic premise might work for a satire. But Soulmate(s) is as earnest as anything seen on Hallmark, as are its characters and their commitment to fighting the Man.

Minutes into the film, Jess, Sam and their friends make protest signs to picket Peterson's. They boo the company's trucks as they roll up to its modern factory.

It's a patronizing and retrograde view of Vermonters' concerns. A glance at recent protests suggests that the issues foremost in local activists' minds are dismantling white supremacy, defunding the Burlington police department, banning U.S. Immigration and Customs Enforcement, and rallying against the climate crisis. They don't have time or energy for much else.

Speaking of the climate crisis, Jess and Sam briefly mention warming winters, yet they don't make the connection to maple syrup production. According to the U.S. Geological Survey's Climate Adaptation Science Centers, studies have shown that climate change can affect the health and growth of maple trees as well as the quality of sap, leading to shortened tapping seasons.

Instead of addressing this actual threat to maple production, Jess and Sam obsess over the quaint sugar shack on Peterson's logo, which they see as flagrant false advertising. They want a labeling system that tells people Peterson syrup comes from "a cold steel factory."

"Like, God forbid that your factory might be new and clean and really up to snuff on food safety," Hope quipped.

But wait. Is Peterson Maple even convincing as a huge, impersonal corporate entity? Not really. Mrs. Peterson, presumably the company's founder and owner, is always around to talk face-to-face with her modest team of Rob Roy tartan-clad floor workers. And she personally oversees her company's purchases of small farms.

It's possible that Lynn and Case were emphasizing something that is true of Vermont culture: Some 802ers view any business that wields considerable power in the state as "the Man," even if said business is actually pretty puny by national standards.

But, given how out of touch with Vermont culture the film's writers seem to be, that seems unlikely.

Soulmate(s), Friday through Thursday, November 12 through 18, at the Savoy Theater in Montpelier and available via video on demand.