What Happens in Montgomery: Town Asks Troopers to Cruise Elsewhere

The Town of Montgomery has no local police force, and until five months ago "staties" were as rare as lynxes in the northern Vermont community near Jay Peak Resort.

Last October, that changed. Vermont State Police cruisers from the St. Albans barracks 30 miles to the west began to patrol in Montgomery almost daily, often in pairs and sometimes by the half dozen, according to town officials. The troopers activated flashing lights at all hours. Suddenly, it seemed as if almost everyone in town had a tale of being stopped for suspicion of driving under the influence of alcohol or drugs.

On January 27, Montgomery Selectboard chair Charlie Hancock got an up-close view of troopers in action: He was a passenger when his partner, Austin Moore, was pulled over for an alleged early-morning traffic infraction. Moore was charged with refusing to be tested for driving under the influence.

A week later, the selectboard voted unanimously to fire off a letter to Vermont Public Safety Commissioner Thomas D. Anderson and state police leaders. The gist: Tell the troopers to leave Montgomery alone.

Hancock voted, too. He suggested to fellow selectboard members that he didn't have a conflict of interest in doing so because the board had agreed to draft a letter to Anderson before his partner's arrest. Other board members agreed that he should not recuse himself, even though Hancock's participation could lead to questions about his objectivity.

The letter claimed the heavy enforcement was unjustified and was scaring the après-ski crowd away from the restaurants, bars and inns that keep the economy of Montgomery, population 1,200, afloat. It alleged that one trooper's personal grudge may have fueled the effort.

"The activity of the State Police in our town does not appear reasonable, fair, or balanced in proportional response to the limited needs of law enforcement in our community," the letter stated. "Nor does it appear impartial. While this may not be the intent, we've seen a pattern which has created a public perception, warranted or not, that our community and its businesses are being targeted."

"The word is out in our area: Don't go to Montgomery," it read.

The selectboard's message stands out in a rural state where many town leaders complain about state police enforcement being too thin. "It's very unusual," said Franklin County State's Attorney James Hughes.

The concerns are not justified, in his view. "My personal opinion is that some people got pulled over and don't like that," Hughes said. "They went to the selectboard, and this is the selectboard's response."

State police leaders refused to answer questions from Seven Days about the situation.

Still, the meeting was "a good conversation" even if the cops didn't fully address all of the town's concerns, Drevik said. The session was "successful and productive," according to a written statement that state police public information officer Adam Silverman provided.

Birmingham and Lamothe did not return calls seeking comment, nor did Anderson. Silverman would not comment on whether a trooper or troopers had been disciplined and said any complaints would be privately reviewed by the state police internal affairs office.

Seven Days requested public records last week documenting any complaints in connection with the controversy. The Department of Public Safety said on Friday it was invoking a 10-day extension to process the request.

One thing is certain. Since the selectboard lobbed its unhappy letter, troopers have been much less visible, residents say.

He insisted that town officials don't excuse drunk driving. "The board wants to have a great relationship with the state police; we want a safe community," Hancock said. "We in no way support or condone things like driving under the influence." He declined to comment on his partner's arrest.

There were no troopers in sight on a recent Thursday in Montgomery Center. Cars packed with snowboards and skis zoomed along Main Street heading to or from Jay Peak. Some of the vehicles were dented and some were sleek — echoing the vibe in Montgomery, where ramshackle buildings are interspersed with carefully maintained Victorians. Residents said the sudden absence of state troopers was noticeable, and many expressed relief. 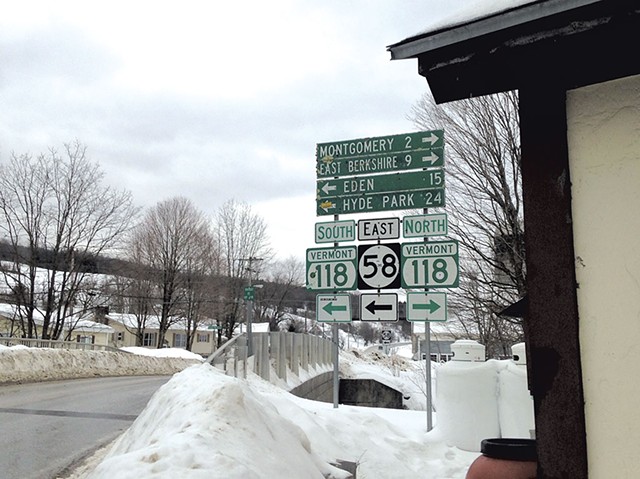 More than a few townspeople think the place gets along just fine without much police presence. Covered bridges, snowy forests and looming mountains lend a tranquil, small-town feel.

That's not to say the area is crime-free, though. The feds busted a local man in a major cross-border pot-smuggling ring in 2013. A Connecticut drug dealer was convicted of a 2005 double homicide. The year before that, 17-year-old Brianna Maitland went missing after her waitressing shift at the Black Lantern Inn and restaurant and was never seen again. The case remains unsolved.

Still, Montgomery typically has "zero" police presence, so when three or four troopers arrived for a day or night, they stood out, said David Bott, who owns the Blue Bike Café on Main Street. "It's a small town," he said. "People noticed right away." His wife got a warning for an out-of-date inspection sticker.

His café, in an 1880s building, offers food, alcohol and live music on Friday nights. Those popular weekend kickoffs went bust when the cops arrived, he said.

"No one was here," said Bott, who believes people were afraid to drive.

Other businesses also suffered because people were afraid to go out, he said. The police presence mystified residents. "Honestly, it was kind of strange," Bott said. "There are a few different rumors going around."

He, too, emphasized that he does not approve of illegal activity such as drunk driving. "If there were really problems in our town, people would welcome [the troopers] being here,'' he said. "But it's quiet."

Whitney Benzing, a hairdresser who lives in Montgomery, said that during the crackdown, state police were stopping moms as they drove children to school and generally overdoing it. "It got a little crazy."

Many residents, including Benzing, said that the biggest bar in Montgomery, the Snow Shoe Lodge & Pub, seemed to be a primary target for enforcement. Troopers often parked near the two-story building on Main Street and waited for people to come out and get in their cars, they said.

Selectboard members suggested to police in their letter that an unnamed state trooper who grew up in the area was responsible for targeting the Snow Shoe, possibly in retaliation for an alleged incident involving one of the trooper's relatives.

Townspeople and Hancock told Seven Days that the trooper referred to in the letter is Charlotte Hartman, who is also the trooper who cited Hancock's partner. Hartman did not respond to a request for comment.

The owners of the pub declined to comment when a Seven Days reporter stopped by.

The selectboard's letter suggested that the Snow Shoe was being targeted unfairly "as we have received no complaints about the business, and the owners of the restaurant have a longstanding history of upstanding community support, both even serving as volunteers for the Montgomery Town Fire Department."

The board's letter also questioned the arrest of Jenny Sirkin, the wife of one of the Snow Shoe's owners, on an impaired driving charge, saying she was held for six hours by police even after blowing a zero alcohol reading on a Breathalyzer shortly after leaving the bar on January 16.

But police don't always know what causes impairment when they make a stop, and they sometimes seek to test for both alcohol and drugs to make a case. According to a state police press release, Sirkin showed signs of impairment and was placed under arrest for suspicion of driving under the influence of drugs. She declined to take a blood test and was cited for DUI drugs, it said. Sirkin denied the allegations and is scheduled to appear in court April 8.

Under Vermont law, a motorist's license can be suspended for six months or more for refusing to undergo breath or blood testing in connection with alleged impaired driving. But police must show there was due cause for the stop, among other things.

Hughes, the county prosecutor, said he believes the charges that came from Montgomery over the past six months were warranted. He acknowledged dropping one case, a DUI charge against a Montgomery resident that stemmed from a police sobriety checkpoint on Route 118 in late January. The resident tested below the legal limit and the citation lacked evidence, Hughes said.

Hughes said he does not have town-by-town citation numbers to compare enforcement in Montgomery with elsewhere, but some 4,000 charges come his way annually. Anecdotally, he does not sense a spike in citations from Montgomery.

The selectboard seems to be telling the state police to "chill out" and stop patrolling in town, Hughes said. That's the wrong message, in his opinion.

"Driving while impaired is a huge problem statewide, and the police are charged with monitoring the public highways as one of their duties," Hughes said. "They are doing a good job to protect the public."

Correction, March 11, 2019: The Montgomery Town Board agreed to draft a letter of complaint to state police the week before the chair's partner was pulled over, town minutes show. A previous version of this story contained an error.

This story was updated on March 6 to clarify that it was state police "leaders" who did not comment. Adam Silverman, a spokesman for the department, did  answer background questions and provided a written statement about the state police meeting with town officials.