WTF: What Happened to UVM's Mural? 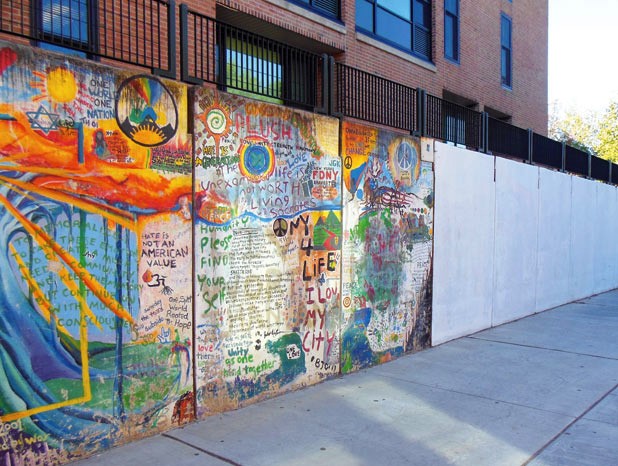 For a couple of decades, commuters who pass by the University of Vermont on Main Street were accustomed to seeing a politically expressive and colorful mural along the sidewalk leading into the Living/Learning Center. The vernacular painting, which covered a roughly 50-foot-long section of the wall, had as its centerpiece a group of young demonstrators carrying a banner that read, “Solidarity for Peace in El Salvador.” Behind the demonstrators was a large-scale portrait of Salvadoran Catholic Archbishop Óscar Romero.

Earlier this year, though, UVM officials had the mural covered over with white paint. Bookending the blank expanse, smaller murals whose subjects are Earth Day and 9/11, respectively, remain intact.

Now commuters and other observers are wondering: Why was the middle mural destroyed, and what is coming to take its place?

The creator of the mural wondered, too. Salvadoran artist Isaias Mata says he was not consulted on the decision.

According to UVM administrators, the painting had deteriorated to the point where it could not be salvaged, and maintenance workers were instructed to scrape away loose paint and cover the remnants of the mural with white primer. The blank space will soon be filled with an image depicting Vermont’s seasons, created by a former UVM student whose design won a university-wide poll.

John Sama, director of the Living/Learning Center, says the mural had become an occasional target for vandalism. A memo written back in 2011 by Sama and student government leaders explained the decision to remove the mural on the grounds that its condition “reflects poorly on the university’s image” when prospective students and their parents tour the campus.

But Mata, who has created many murals and paintings over a three-decade career, takes issue with this decision. Obliteration of the work should be considered “an affront to art,” he writes in an email to Seven Days from El Salvador. UVM administrators say they do not know the name of the artist who painted the work on campus, but tracking down Mata did not prove especially difficult.

“I regret that this happened, that the mural is covered with paint and is no longer part of the imagination of the university,” he writes in Spanish from his native country.

Mata adds that he should have been consulted because he has a copyright on the mural.

Meghan O’Rourke, a Burlington resident and a former UVM student activist who helped install Mata’s mural, says that she is “saddened but not surprised” by the university’s action. Officials “didn’t realize what they had,” she surmises. The mural was a product of “a really important period in UVM’s political history and our national history,” O’Rourke adds.

Mata was an outspoken opponent of U.S. military support for Salvadoran government forces fighting a civil war (1979-1992) against leftist insurgents. Archbishop Romero was assassinated in 1980 while celebrating Mass in a chapel in San Salvador, the country’s capital. No one was charged with his murder, but many believe that members of a right-wing death squad were responsible.

American involvement in the war in El Salvador, as well as in other Central American conflicts, inspired a sizable protest movement in the United States that included students at a number of universities. Compañeras, the name of a UVM organization supportive of the Salvadoran rebels, commissioned Mata to paint the campus mural in 1993, O’Rourke recalls.

The wall outside Living/Learning had been poorly prepared for the work, however, and the mural soon began flaking and crumbling. “It didn’t survive even one Vermont winter,” O’Rourke says. She undertook an effort to restore Mata’s painting, and raised about $600 for the purchase of supplies from Precita Eyes Muralists, a San Francisco-based organization. Precita’s website says the group seeks to “beautify urban environments and educate communities locally and internationally about the process and the history of public community mural art.”

The association was recently involved in the restoration of a Mata mural in San Francisco’s Mission District that had also deteriorated after years of exposure to the elements.

But, rather than consulting Precita or other mural restoration experts, UVM administrators decided to cover Mata’s work and to organize a contest to choose what the school called “an update” of the original work. The winner, chosen in a vote by more than 1000 students, is a depiction of seasonal Vermont landscapes by Alexandra Palin, currently a junior at the Maine College of Art in Portland. Palin transferred out of UVM last year.

“It’s a little intimidating,” she admits in a phone interview regarding the commission. “It’s such a public work in such a high-traffic area.”

Palin is scheduled to start working on her mural on October 11. She says she knows nothing about the artist whose work has been whitewashed to make way for her creation.

“I was hoping for something with a social-justice component,” Sama says about the replacement. “But this is what the process produced.”

Both the 9/11 and Earth Day murals have also deteriorated and may soon be removed, Sama adds.

Meanwhile, O’Rourke mourns the loss of Mata’s mural. “I strongly believed in an aesthetically charged and public statement about the meaningful relations among people in the time they’re living,” she says.