What Happened to the 'Diving Bell' in Burlington's Union Station? 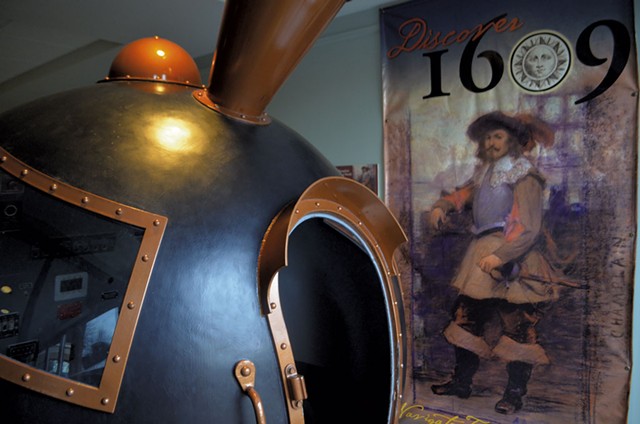 In "Big Yellow Taxi," Joni Mitchell sings "Don't it always seem to go / That you don't know what you've got / Till it's gone." Well, sometimes when it's gone, we aren't even sure what it was to begin with.

Such was the case for one Seven Days reader, who emailed us last week to ask what happened to the "diving bell contraption" at Burlington's Union Station at 1 Main Street. It had decorated the lower-level lobby since he moved to the Queen City 11 years ago.

"About two weeks ago it was removed and has, to the best of my knowledge, vanished," he wrote, "probably not in the lake."

Indeed, the large glass and metal orb has rolled on from its former trackside home, but it didn't disappear into the murky depths of Lake Champlain. And it wasn't a diving bell after all, but a large, metal ball — albeit one with a headlight, a bell, a cowcatcher and a connection to Seven Days history.

"Train Ball," as the spherical sculpture is titled, was created by Lars Fisk, a Brooklyn-based artist. The 49-year-old Norwich native graduated from the University of Vermont in 1993 and was hired two years later by Burlington's then-brash upstart newspaper Seven Days as its first art director. After a year of laying out the independent weekly's articles, ads and photos, Fisk became the art director for the band Phish in its visual design department, creating performance art, sculptures and concert architecture. He went on to earn a master of fine arts degree at Columbia University in 2005.

In the 1990s, Fisk discovered his artistic niche: reinterpreting the world around him as though it were viewed through a fish-eye lens. It was during a drive along Interstate 89 that he was struck by the inspiration to create ovoid sculptures, he told Seven Days' Kevin J. Kelley in 2016.

"It happened in 1996 as highway hypnosis," Fisk told Kelley. "I started seeing the road kind of roll up into the horizon. It looked to me like a big ball."

Today, Fisk is known for his globoid versions of normally non-round objects, including a school bus, a barn, a Mister Softee truck, a John Deere tractor, a Volkswagen bus and a UPS delivery truck.

Fisk and his balls get around. In 2015, he created two large, Boston-themed ones that are installed on High Street. One ball closely resembles the famed left field wall, aka the Green Monster, at Major League Baseball's Fenway Park, including working lights and a scoreboard. The other resembles a Red Line train of the Massachusetts Bay Transportation Authority. Fisk's works of art, on view from Minneapolis to the Netherlands, sell for tens of thousands of dollars.

In 2007 Melinda Moulton and Elizabeth Steele, CEO/redeveloper and president/owner, respectively, of Main Street Landing, commissioned Fisk to make the rotund, railroad-themed piece. At the time, the businesswomen had recently completed upgrades to the station and were making it available for public events, including the annual Polar Express Train Ride for kids. And, as Moulton pointed out, Main Street Landing was already accumulating one of the largest local contemporary art collections in the state.

"We were collecting art ... and thought, How cool would it be to have the train ball sculpture in the train station?" Moulton recalled. Fisk included a number two on the side to represent his two female patrons and designed "Train Ball" so that children could crawl inside and pretend they were driving it.

Where is "Train Ball" now? As Moulton explained, in January 2017 the State of Vermont purchased the lower level of Union Station from Main Street Landing in preparation for the expected arrival of regularly scheduled Amtrak service into Burlington. For the last year and a half, Moulton has known that "Train Ball" had to be moved, especially because she and Steele wanted to house it at one of their properties.

But although "Train Ball" is round, the one-ton sculpture cannot simply be rolled away, nor would it fit through the doors of Union Station. So early one morning about two weeks ago, Moulton said, Demag Riggers & Crane Service showed up with a team of movers, took off the door frames, covered the sculpture with blankets, and then hoisted it on a forklift and drove down the street "without any flash or fancy."

"Train Ball" is now parked at its new home — on a circular track with railroad ties — in the first-floor lobby of the Lake & College building, across from a Mamava lactation pod.

"It looks gorgeous ... like it was always meant to be there," Moulton said. "And that's where it's going to live for a long, long time."

One hopes, anyway. More than a couple of Fisk's other ball sculptures proved too irresistible to vandals, who pushed and rolled them off their foundations until they were decidedly non-round. As the artist told Gadfly Online magazine in August 1999, he forgave the vandals. "I'm glad they're so compelling," he said at the time. "They beg to be rolled."