What Happened? Questions and Answers About Vermont's Primary 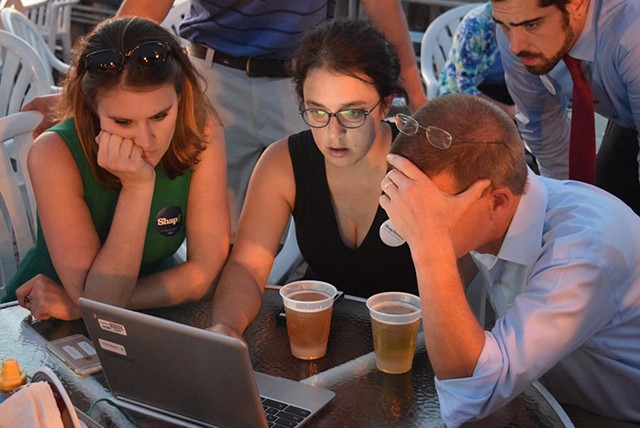 Now that the dust has settled, it's clear what happened in last week's primary election. Right?

Campaigns are a black box — particularly in Vermont, where exit polls aren't conducted in state elections and polling of any sort is a scarce commodity. We know who won, but we don't know who voted for whom — and we definitely don't know why.

So here are the questions I've been pondering this past week, along with my best guesses at the answers. But, reader, beware: I'm probably totally wrong.

How did a novice statewide candidate defeat a veteran pol for the Democratic gubernatorial nomination?

Before this campaign season, former transportation secretary Sue Minter had never run a race outside of her old House district in Waterbury, Huntington, Bolton and the bustling metropolis of Buels Gore. She still managed to defeat Democrat Matt Dunne — a former state senator who had previously run for lieutenant governor and governor — 49 percent to 37 percent.

From the outside, it appeared that this race came down to timing and discipline. Dunne ran strong through the dog days of summer, but Minter hit her stride when it mattered: as voters started paying attention in late July.

Dunne reacted by throwing a Hail Mary pass: signaling to supporters of a third Democrat in the race, Peter Galbraith, that he was receptive to their concerns about industrial-scale wind power. The move backfired and precipitated a series of public stumbles. All the while, Minter kept her head down and focused on her game plan.

So was it all about wind?

Definitely not. The issue found resonance because it confirmed a preexisting narrative about Dunne: that he'd say anything to win a vote.

But wind-energy proponents have much to celebrate. Their candidate, Minter, won 2,729 more votes than Dunne and Galbraith combined.

Who really won the primary?

Bill McKibben, who very publicly shifted his endorsement from Dunne to Minter nine days before the primary — and also backed Sen. David Zuckerman (P/D-Chittenden) in his successful bid for the Democratic lieutenant gubernatorial nomination.

Are elections for sale in Vermont?

At $5.3 million, this year's gubernatorial primary was the most expensive in state history. It's clear that candidates needed big money to compete. Galbraith's fundraising failure — he raised just $173,000 from non-relatives and spent a third as much as either rival — surely starved him of the exposure he needed.

But retired Wall Street banker Bruce Lisman failed to buy the Republican nomination, despite outspending Lt. Gov. Phil Scott $2.1 million to $806,000. After dropping $118 for every vote he received, Lisman got the same result most wealthy self-financers do in Vermont: a trouncing. Scott beat him 60 to 39 percent.

Up and down the ballot, well-funded pols met with defeat. Rep. Kesha Ram (D-Burlington) outspent both her rivals for the Democratic LG nomination and wound up with just 17 percent of the vote. In the race to represent Chittenden County in the Vermont Senate, two of the three biggest spenders — newcomers Faisal Gill ($49,837) and David Scherr ($32,487) — failed to win seats in the six-member delegation. The third, Burlington Rep. Chris Pearson ($59,341), did make the cut.

Has Phil Scott woken up yet?

Sure, he trounced Lisman. But as the GOP's sole statewide officeholder, he should've trounced his heretofore unknown challenger by a wider margin. In the closing days of the race, even his closest allies were freaking out that he hadn't responded to Lisman's attacks sooner. (For more on this, see here.)

Note to Scott: You're about to face a well-oiled Democratic machine. Wake up!

How did Sen. Bernie Sanders influence the Vermont primary?

His late endorsement in the lieutenant gubernatorial race clearly helped Zuckerman. How much is harder to say. Many voters probably already identified the ponytailed Prog with Sanders, who had endorsed the legislator 10 times before.

Sanders' biggest influence on the primary may have been his neutral position in the gubernatorial race. Dunne worked long and hard for the senator's endorsement but never nailed it. That made his incessant imitation of Sanders — in TV ads, mailers and debates — ring hollow.

The former presidential candidate endorsed in 18 legislative races. But most of his picks were established incumbents, such as Sen. Anthony Pollina (P/D-Washington) and Rep. Susan Hatch Davis (P-Washington), who didn't have much to fear. Aside from Pearson, who received a major fundraising assist, Sanders mostly just provided written expressions of support.

Sanders declined to back some fervent Sanderistas, including his own Democratic National Committee delegate, Ashley Andreas, who unsuccessfully challenged another Sanders delegate, Rep. Kevin "Coach" Christie (D-Hartford). Of the five competitive House races in which Sanders did endorse, only three of his picks won.

How did Republican presidential nominee Donald Trump influence the primary?

Also hard to say. But if Scott's public condemnation of his party's eventual standard-bearer hurt him in the GOP primary, it didn't show. And it may well save him in the general-election fight, during which Minter and the Vermont Democratic Party will surely try to tie him to Trump, despite his clear public record of opposition.

That's become a cliché in the national political dialogue. Here in Vermont, the results are mixed.

The two biggest insiders in the gubernatorial race — Minter and Scott — won their respective races. The only incumbent legislator to lose a primary last Tuesday was suspended Sen. Norm McAllister (R-Franklin), who faces trial on sexual assault charges (though that may say more about the power of incumbency). House Appropriations Committee chair Mitzi Johnson (D-South Hero) and House Education Committee chair Dave Sharpe (D-Bristol) both prevailed in contested primaries.

On the other hand, Zuckerman managed to beat House Speaker Shap Smith (D-Morristown) in Smith's own party's primary. That was despite the fact that most elected Democrats backed Smith — and that the Vermont Democratic Party refused to share resources, such as its voter file, with Zuckerman.

So how did Zuckerman take down one of the most powerful Democrats in the state?

Smith may have been the favorite among Montpelier muckety-mucks, but Zuckerman has been cultivating liberal advocates and activists for two decades — even outside his Chittenden County base. Those people vote in Democratic primaries.

Zuckerman was the only candidate in the race who aired television ads. And, as we mentioned earlier: Bernie.

For his part, Smith faced plenty of headwinds: He got into the race late, lost some of the establishment Democratic vote to Ram and was encumbered by the baggage of his eight-year speakership.

Was that the last we've seen of Shap Smith?

Will Zuckerman help or hurt Minter?

The moderate (at least by Vermont standards) Minter might be able to win over skeptical Progressives by embracing Zuckerman's candidacy and bringing him into the Democratic fold.

But she may want to keep him at arm's length. His prior support for a carbon tax and his outspoken advocacy for marijuana legalization (not to mention that hippie hair) could pose problems as she courts moderate voters. Also, how come nobody mentioned in the primary that Zuckerman is a vaccination skeptic who opposed the elimination of the state's so-called philosophical exemption?

So who's gonna be Vermont's next governor?

There are generally two schools of thought when it comes to this general-election matchup. The first notes that, in every open Vermont governor's race since 1962, control has switched to the opposite party. So it's Scott's race to lose.

The second school of thought is that Trump will dampen Republican turnout and motivate flaky Democrats to vote — many of whom will check the box next to Minter's name.

I subscribe to both theories. So who the hell knows?!

It was a bittersweet moment for all who cherish newspapers and prize local ownership. The good news is that the financially ailing papers will remain in print. The bad news is that, for the first time in the Herald's 222-year history, it will not be controlled by locals.

But the buyers — Reade Brower of Maine and Chip Harris of New Hampshire — are sending positive signals. Brower, who has been in the business for three decades and owns many of Maine's leading newspapers, told Seven Days that he doesn't have "a cut-and-slash personality" when it comes to newsroom jobs. Harris, whose Upper Valley Press prints the two papers and Seven Days, suggested he'd like to reverse the Mitchells' decision earlier this summer to drop from daily publication to four times weekly.

Brower and Harris have an opportunity to generate a lot of goodwill in the communities they will soon serve. Here's how they can do it: First, invest in their depleted newsrooms so that the Herald and Times Argus can reclaim their position as the best dailies in Vermont. Second, hire back former Herald news editor Alan Keays, who was fired nearly two weeks ago for making a brave and ethical decision: to cover the financial mess at his own company.

In return, the community should rally around the papers by renewing lapsed subscriptions and taking out advertisements. Because local journalism ain't free — and it is absolutely essential.

Despite the Herald's troubles, there has been an uncharacteristic spate of good news recently in the southern Vermont journalism world.

"We're going to attempt to cover all the stories that we feel are newsworthy and, at this point, are sort of slipping through the cracks," says McKeever, who will serve as news director.

Kevin Moran, vice president of news at Journal owner New England Newspapers, says he's already looking for a replacement for McKeever. Even better, Moran's on a hiring spree to expand the newsrooms at the Journal's sister papers: the Brattleboro Reformer, Bennington Banner and Pittsfield, Mass.-based Berkshire Eagle. A group of Berkshire-based investors bought the four papers in May from national chain Digital First Media.

According to Moran, the Eagle has already insourced several production positions and is looking to add an investigative reporter. The Reformer is adding a news and a sports reporter. And the Banner, which has already gained one reporter, is adding another.

That last position will be in partnership with VTDigger.org, which plans to finance half of its salary. Digger has had a similar partnership with the Commons, a Brattleboro-based weekly, for nearly a year. The online news outlet also recently hired Adam Federman to cover Rutland County.

Digger-in-chief Anne Galloway says all three positions will be part of a new southern Vermont bureau, which she hopes will "produce more news of local and statewide interest." They'll be funded, for a time, by a grant from the Oklahoma-based Ethics & Excellence in Journalism Foundation.

"We're trying to collaborate in a competitive environment," Galloway says. "At the end of the day, it's making sure that readers get news."

The original print version of this article was headlined "What Happened?"