WTF: What Goes On in the Dusty Old Star Press on North Avenue? 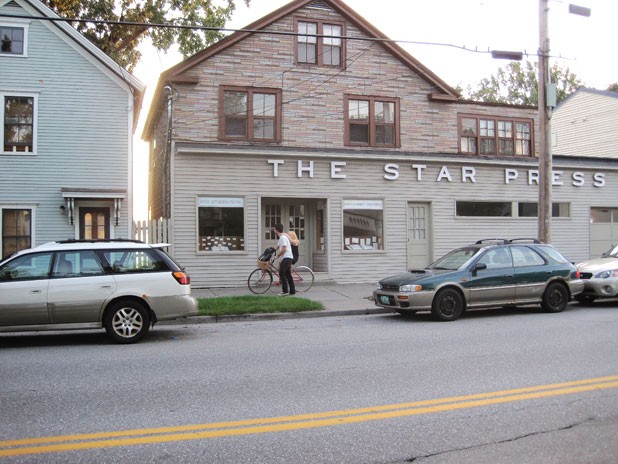 There’s a print shop on North Avenue in Burlington with a million-dollar view of Lake Champlain that keeps a profile so low it’s all but invisible — except for the big white letters affixed to the clapboard exterior that spell out “The Star Press.” Passersby may wonder about the antiquated window displays of name cards and wedding invitations. Perhaps some pause to peer into the dimly lit interior, which suggests a set for a “Twilight Zone” episode about a ghostly enterprise that hasn’t seen a customer for decades.

But the Star Press, situated midway between Burlington Police Department headquarters and the former site of Burlington College, is actually open for business almost every weekday, as it has been for the past 80 years.

Push through Ted George’s front door to discover the tools and décor of a bygone era: gray wooden consoles sit atop a well-worn gray wooden floor. Within them, thin printer drawers contain blank and inked paper. Ancient and more modern offset and letterpress printing machines occupy the space, which is adorned with rows of posters for long-ago local events. One advertises $2 tickets for a Four Freshmen concert at UVM’s Patrick Gym. The jazz group’s first big hit was in 1952.

At the rear of the shop, small, dusty windows offer a panoramic view of the lake and Adirondacks.

George keeps one of his most noteworthy pieces of equipment tucked in a corner in the basement: a dust-covered 1916 foot-pedal printing press that belonged to his father. A friend of Simon George gave it to him in 1927. The friend bought the press for $2, but had no place to store it.

At the time, Simon George was a junior at Burlington’s Cathedral High School, which has since been torn down. At first, George stowed his friend’s small iron press in the basement of his family’s home at 55 North Avenue. He began tinkering with it the same summer Babe Ruth hit 60 home runs and Charles Lindbergh flew solo from New York to Paris. Just as Gutenberg had done with his world-changing invention nearly 500 years earlier, the teenager arranged and inked rows of movable type.

When Simon George started printing name cards for classmates, his son relates, it caught the attention of Cathedral’s principal, the Rev. Robert Joyce, who called George into his office one day. George feared he was in trouble, but the priest had a job for him: Print 500 copies of a 5” by 7” text. George had no idea how to fill such an order in just a couple of days. He didn’t have enough type to run the job all at once, so he nervously printed one part of the page, then another.

When it came time to bill Joyce for the job, George grossly undercharged for his work, his son says. Joyce later became Burlington’s Roman Catholic bishop.

That job marked the start of Simon George’s career — one that allowed him the freedom of self-employment. He never had to work for anyone else. Ted George can make the same claim. He inherited the Star Press — the brand name of that original 1916 printing press — after his father moved the shop to the building next door, where it remains today. Ted George and his two siblings were raised in one of the two upstairs apartments.

These days George prints posters for city departments and long-established local companies, such as McKenzie of Vermont, while also turning out wedding invitations and business cards. He works on offset, as well as letterpress, machines. The latter gives Star Press its cachet among cognoscenti.

Not many print shops operate letterpresses these days, notes Sean Melinn, a technician at Vantage Press on North Street, which doesn’t offer the service. Melinn likes the old-fashioned machines, though, because, he says, “they can do things offset and digital presses can’t do,” such as printing the perforated cardboard flyers that hang on residential door handles. Melinn likens the difference between digital and letterpress to that between CDs and vinyl records. The latter crackle with character, he says.

George, a trim 71 year old of Lebanese-French descent, says he wants to continue working as long as he’s able. “I’ve got lots of retired friends who don’t know what to do with themselves,” he says. George and his wife, Joyce, who keeps the business’ books, constitute the Star Press workforce.

When a visitor asks whether he’s tempted to sell the property, which is right next to $300,000-plus condos, George smiles. “Maybe, if I can get my price,” he replies. One of his upstairs tenants has asked for the chance to bid first on the building. “The views up there are even better,” he says. “But I’m not in any hurry to leave.”