What Does the Vermont Expression 'Had the Radish' Mean? | WTF | Seven Days | Vermont's Independent Voice

What Does the Vermont Expression 'Had the Radish' Mean? 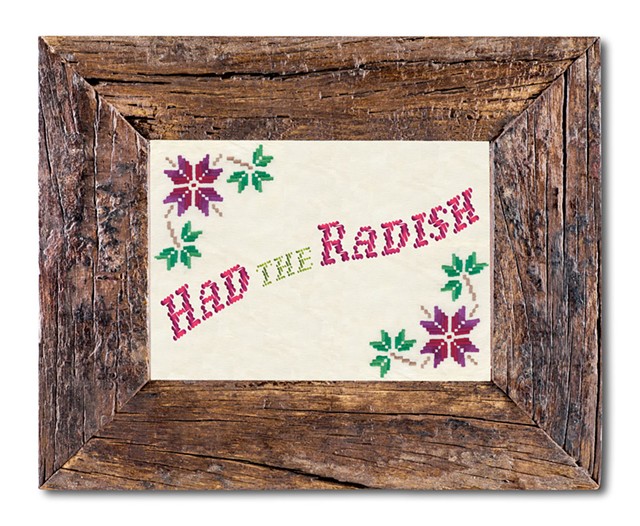 In keeping with this week's Winter Reading Issue, WTF answers a native Vermonter's burning lexicological question: "What does the expression 'had the radish' mean, and where did it come from?"

OK, perhaps the question isn't burning so much as smoldering. Still, where there's smoke, there's fire — or so might say Wolfgang Mieder, a University of Vermont professor of German and folklore. Mieder is Vermont's foremost paroe­miologist, or scholar of proverbs and proverbial expressions. If you've ever wondered about such colorful Vermontisms as "You can't make a whistle out of a pig's tail" or "A gallon of sap is worth one day's labor," Mieder is your go-to guy for tracing their meanings and origins.

Mieder, 73, is a jovial fellow from Lübeck, Germany, who's taught at UVM for 46 years. During his tenure, he's authored or edited more than a dozen books, including A Dictionary of American Proverbs, a compendium of more than 15,000 sayings, maxims and adages commonly used throughout the United States and Canada. As he remarked during a recent interview, "I always thought it was kind of neat that an immigrant did this book."

Mieder's enthusiasm for metaphorical language is palpable, and his office walls are lined with shelves of reference books and proverbs written in framed needlepoint. Some are commonplace, such as "An apple a day keeps the doctor away." Others are less so: "One kind word will warm three winter months."

Mieder instantly recognized the expression "had the radish" as meaning something that's in deep trouble, spent or done for, as in: "That old tractor's finally had the radish." In fact, he first heard it from his wife, who heard it at Milton High School, where she taught German and Latin for 40 years after the couple moved to Vermont in 1971.

As to the expression's Vermont roots, however, Mieder couldn't immediately say.

"The minute you ask, 'Where did it come from? How old is it?'" he said, "you have no choice but to settle down, maybe with a box of chocolates and a good cigar, and get to work."

As Mieder explained, some proverbs' histories are easily traceable, such as those that originated in advertising ("Just do it"), political campaigns ("Yes we can"), athletic competition (snowboarders' "Go big or go home") and other professions (e.g., computer programmers' "Garbage in, garbage out").

Other expressions have murkier pasts. For example, the common proverb "Don't judge a book by its cover" is ubiquitous in English-speaking countries and likely spawned numerous regional variants, including Vermont's "Don't judge a cow by its udders."

But, as Mieder pointed out, there's no reason to assume that the bovine-based variation originated in Vermont versus, say, New Hampshire or Wisconsin. Even "Jeezum Crow," a polite euphemism for "Jesus Christ" that's typically associated with crusty old Vermonters, isn't native or unique to the Green Mountain State.

He once traced the "good fences" quote to a farmers' almanac from North Carolina in 1850. He later discovered an even earlier publication of the proverb in an Ohio newspaper from 1834.

As to a Vermont origin of "had the radish," Mieder agreed to check his home reference library and report back. In the meantime, he recommended the online reference tool word-detective.com and a January 2012 entry on the topic.

That column's unnamed author was unable to dig up the roots of "had the radish." However, at least 15 readers posted online comments, including nine who were either native Vermonters themselves or first heard "had the radish" from a Vermont or North Country native.

One theory held that the phrase originated from the 1939 film Gone With the Wind, in which Scarlett O'Hara is reduced to scrounging for food and ends up eating either a radish or a turnip. That explanation seems unlikely, given that the film was distributed widely throughout the United States, though the expression is not.

One commenter theorized that the expression originated from the German phrase "sich die Radieschen von unten ansehen" — literally, "to look at the radishes from below," or, as English speakers would say, "to be pushing up daisies." Mieder declared that explanation dubious.

A few self-described Vermonters opined that the expression might refer to wild radishes, which are poisonous to sheep and rabbits. Hence, any critter that "had the radish" wouldn't survive the encounter. Yet another explanation noted the saying's similarity to "had the pork," which refers to a thief caught red-handed with stolen property.

Perhaps the most far-fetched theory speculated that "had the radish" is a bastardization of "had the kaddish," a reference to Judaism's prayer for the dead. But it's unlikely that Jewish Vermonters, who currently comprise only 2 percent of the state's population, would be responsible for such a broadly used phrase.

When reached later, Mieder granted that "had the radish" may have arisen in Vermont, but he couldn't say so conclusively. To surmise as much without more evidence, as another Vermont proverb goes, would be to "stretch your arms longer than your sleeve will reach."

Correction, December 21, 2017: An earlier version of this story contained a misspelling of Wolfgang Mieder's name.