WTF: What do UVM students mean by the "Flying Diaper"? 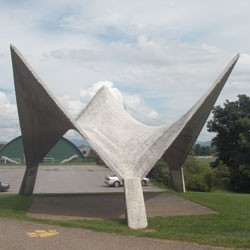 Sunbathing, dancing, doing homework (or not), getting married and having sex are just a few good uses of the Flying Diaper. Don’t worry, we’re not talking about an actual diaper. The Flying Diaper is the unofficial name of a structure on the University of Vermont’s Redstone Campus that just happens to resemble a diaper if it were upside down and, well, flying.

UVM students pass the Diaper every day en route to classes or Patrick Gymnasium. Its location is also a great place to nap, or have a snowball fight.

For a few years, students could even watch a live cable feed of goings-on in front of the Diaper by tuning to channel 13 on their dorm-room sets. UVMtv, the student-run television station, used to be located in the bottom of Coolidge Hall, a building near the Diaper. Then technical director Trav Fryer rigged it so a camera filming the structure connected directly to the cable network.

Once, UVM Diaper legend has it, some students forgot about the surveillance and were caught enjoying illicit substances near the Diaper. The opportunity for late-night Diaper amusement was lost, however, when the camera was taken down at the end of the 2009 academic year, when UVMtv moved into its current Davis Center location.

Students have a strange fascination with the Diaper, mainly because few know why it’s there in the first place. Even professors who have been at the university for years admit they don’t know the origins of this oddly shaped structure. The only clue available to the curious investigator is the rumor that engineering students were behind it.

Turns out, the rumor is correct. An inquiry to UVM’s engineering department reveals that the Flying Diaper was built in 1968 by the graduating civil-engineering class, and it’s officially called a hyperbolic paraboloid — in engineering slang, a “hypar.” It’s a shape made entirely from straight lines that appears curved — hence its strange appearance.

In the spring of ’68, assistant professor of civil engineering Burdette “Bud” Stearns taught a course on the mechanics of materials. Mid-semester, Stearns assigned his 23 students a design project and, to make it interesting, divided the students into groups to compete with each other.

When the designs were complete, the class regrouped and voted on the best. The winning design, by Burlington native William Arnold, was chosen for its practicality and the ease with which it could be built. It was a hypar — our future Flying Diaper.

Then Ralph Clark — a nontraditional student who had worked in construction — suggested the class actually build the hypar. All the students pitched in, and local firms, including Vermont Structural Steel and Anderson Ready Mix of Waterbury, donated the necessary materials.

Clark took charge as foreman, and the building process began. Laible recalls that the group was lucky the weather held. The Rutland Herald ran an article noting that the sunshine gave the male engineering students a different set of problems — distracting “coeds” sunbathing on the lawn. (Redstone used to be the female campus).

The group had to build a wooden mold and fit it with steel bars to support the concrete after it was poured. Pouring the concrete was the trickiest part of the process, since it had to be done in one go. The students worked in shifts of five or six for three full days to pour all the concrete.

“Well, we ordered pizza and [brought along] other sorts of things that we weren’t supposed to have. It was a good time,” Laible says. “Of all the things in my undergraduate experience, this was the most valuable one,” he adds. “You went from theory to actually building it.”

In 2003, the Diaper faced a serious threat — it was targeted for destruction to make way for new university parking lots. But another of Stearns’ former students came to its rescue. Like Laible, Jean-Guy Béliveau helped build the Diaper in 1968 and returned to UVM as a professor. Béliveau clearly had a special place in his heart for the structure — when he got married in nearby St. Augustine Chapel, the couple’s receiving line passed under the Diaper.

Béliveau joined his daughter, Chantal, a member of UVM’s civil and environmental engineering class of 1997, to speak for the Diaper at Burlington City Hall, and the university ended up sparing it. When Béliveau passed away in 2009, part of his memorial service was held under the hypar.

The Flying Diaper remains in its rightful location to this day. Nowadays, a quick search will bring up videos of students freestyle skiing off the Diaper, but usually it hosts more peaceful pursuits. The UVM students of 1968 and 2010 aren’t so different — they know a great napping spot when they see one.