What Are Those Reflective Things on Top of the Vermont House? | Architecture | Seven Days | Vermont's Independent Voice

What Are Those Reflective Things on Top of the Vermont House? 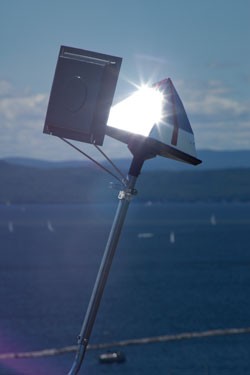 Perhaps they’ve caught your eye, those silvery, geometric things atop the Historic Vermont House at the corner of Main and St. Paul streets in Burlington. Attached to short, thin poles, the miniature pyramids spin in the breeze and shimmer so it’s hard to get a clear look at them.

Are they an art installation? Or are they antennae? Weather instruments? Some new NSA surveillance method? Seriously, WTF are they?

Keith McManis, property manager of the Vermont House, informed me that the devices are a deterrent system designed to prevent pigeons from nesting on the roof. Powered by a motor, the metallic pyramids rotate and reflect sunlight in such a way that pigeons become disoriented and fly away.

The head-bobbing birds have been a problem at the Vermont House since before McManis began managing the property in 2009. They were undaunted by standard pigeon spikes, and nested on the roof as well as on the seventh-floor exterior railings. Roosting there, the pigeons made a mess of (read: pooped on) the building’s awnings and the adjacent sidewalks, which, as a result, required pressure washing every two months. Patrons of the street-level businesses also occasionally got pooped on. Imagine leaving Tonic hair salon, housed on the ground floor of the Vermont House, hair freshly cut and still warm from blow-drying, only to feel a plop on your luscious locks. Ew!

Because of the scope of the problem, Mike Pierce, local branch manager of Orkin pest control company, recommended the Eagle Eye deterrent system to McManis. Installed in June, it cost in around $10,000, McManis says.

So is it working? While the system will not keep the Vermont House roof 100 percent pigeon free, Pierce says that, since it was installed, he has noticed a reduction in the number of birds surrounding the building. The reflected light makes the area inhospitable to pigeons and will “prevent establishment of large flocks,” he adds.

According to the Humane Society of the United States, killing pigeons doesn’t work; simply removing a portion of the population does nothing to affect the carrying capacity of the habitat — that is, how many birds it can support. In time, they’ll reproduce and replenish the population. (A type of pigeon contraception, OvoControl, is marketed as a humane way to control booming pigeon populations and has been used successfully in Hawaii.)

Humans and pigeons living in close proximity is not just a modern urban phenomenon. The Cornell Lab of Ornithology has cited evidence for the domestication of pigeons in ancient Mesopotamia and Egypt. Today’s urban pigeons are the feral cousins of the more refined carrier, or messenger, pigeons brought to the U.S. in the 17th century. While the birds can trace their ancestry back to the rock dove, neither the domesticated nor the urban pigeon is truly wild. The website of London’s Natural History Museum explains that the tops of buildings, balconies and bridges — where urban pigeons tend to nest — mimic the rock ledges on which the birds’ wild ancestors lived.

Historically, pigeon droppings have been prized as fertilizer. But tell that to passersby at the Vermont House. Aside from the mess and inconvenience, all that pigeon poop can be dangerous, too.

A fungal infection called C. neoformans cryptococcosis spreads through bird droppings, including pigeons’, and through soil containing them. In humans, the infection can cause a pneumonia-like illness and inflammation of the brain and the membranes surrounding the central nervous system. If untreated, it can be fatal. Luckily, the rate of occurrence is very low — about one infection per 100,000 healthy people a year, according to the U.S. Centers for Disease Control and Prevention. However, infection rates for people living with HIV/AIDS are much higher.

Because pigeon droppings are acidic and contain crystallizing salts, they can also cause stone structures to crumble. In the case of the Historic Vermont House, it’s a structure with a fair amount of history. Built in 1910 to replace a former hotel on the same site, the Vermont House was the tallest building in Burlington when it opened in 1911. The roof used to hold a garden and solarium from which guests could watch the sun set over Lake Champlain. On that roof today, the Eagle Eye pest deterrents glimmer as they rotate in the sun.

What do pigeons think about all this? What’s their response to the efforts to keep them off the Vermont House? Moreover, how do they feel about having been domesticated by humans and then later deemed dangerous pests?

I tried to interview one, but it just cooed a little and flew away.