What a Wiener! Hobbes the Dachshund Transforms Talk Radio in Vermont 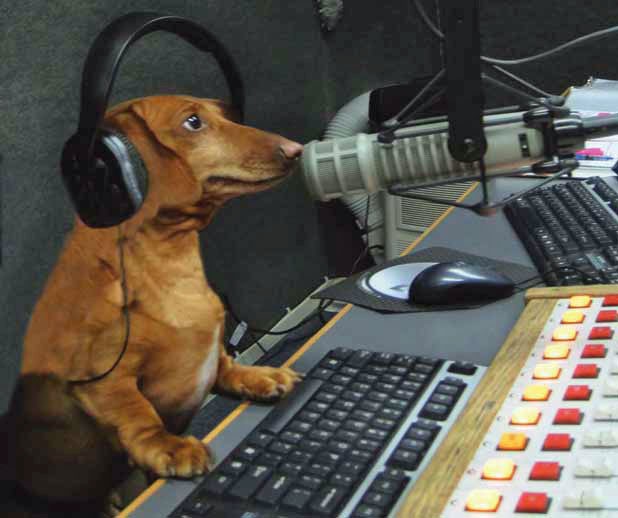 Bruce Zeman’s daily talk-radio show, “The Wake-Up Crew with Bruce and Hobbes,” is the audio equivalent of a morning face lick. His sidekick on WVTK, Hobbes, is America’s first and only full-time canine radio host.

“He’s the reason this station is so successful,” says Zeman, who is also general manager of the 25,000-watt FM station in Middlebury. “I’d like to think I’ve had something to do with it, but I have no illusions.”

Actually, if Hobbes is rescuing the once-struggling radio station, he’s only returning the favor. In October 2009, Zeman was on the air when he got a phone call from Jennifer Erwin, shelter manager for the Addison County Humane Society, about a brown, short-haired dachshund that was in “rough shape” and needed a home.

Zeman, 42, a New Jersey native who grew up with dachshunds, was immediately interested. He already had experience with wounded and neglected critters, having spent time on the Gulf Coast doing volunteer animal rescue after Hurricane Katrina. In New Jersey, Zeman was also instrumental in the passage of a law that recognizes pets as family members and not just property. Still, Zeman wasn’t prepared for Hobbes’ dire condition.

“I went over there and was horrified by what I saw,” Zeman recalls. “He was bleeding from every orifice.”

Evidently, the husband of Hobbes’ former owner had locked the dog in the kitchen and starved and neglected him. One day, in a fit of rage, he threw the dog against a wall. The wife surrendered him to the animal shelter only after her husband threatened to shoot the dog if he was still there at the end of the day.

Zeman and his wife, Tami, a nurse at Fletcher Allen Health Care, adopted Hobbes and nursed him back to health. Over the next few months, Zeman talked about his new dog during his morning show and occasionally brought him into the studio, where his yips and howls could be heard over the air. As more listeners learned of Hobbes’ story, Zeman says, people started urging him to “do something more” on the issue of animal cruelty.

In March 2010, Hobbes formally debuted as a full-time WVTK morning radio host — and a star was born. Since then, Bruce and Hobbes’ show, which runs from 5:30 to 9 a.m., has hosted such guests as Rep. Peter Welch, Middlebury Police Chief Thomas Hanley and former governor Jim Douglas. Hobbes has been invited onto the floor of the Vermont House of Representative and was made an honorary K-9 member of the police forces in Middlebury and Vergennes.

More recently, the duo was invited to appear on an upcoming episode of “The Ellen DeGeneres Show.” A children’s book, called Hobbes Goes Home, is due out this fall.

“Gov. Shumlin is going to cook him breakfast in his office,” Zeman adds. “We’re still working on a date.”

But Zeman insists that Hobbes is much more than a clever marketing gimmick. Last year, WVTK held a 72-hour radio marathon, during which Zeman and Hobbes raised $12,000 for a new animal shelter in Addison County. Most of the donations, Zeman notes, came in $5 and $10 increments. When they hit the $12,000 goal, he says, “We had grown men crying in here.”

Is he worried about the future of local radio?

“No, I’m not,” Zeman says confidently. “What we’ve found is that people aren’t so much concerned about what Lady Gaga is doing. They want to know if their kids can get to school, what the weather is like and what’s going on in their community.”

Most importantly, he adds, those other stations “don’t have Hobbes.”