Opinion: What a Shame 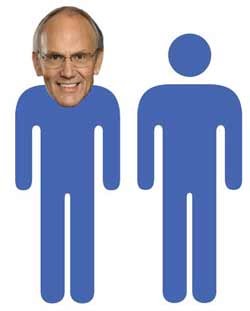 Shame gets a bad name in America, and most of the time yours truly can be found among its detractors. Especially where sex is concerned — and in America, sex is usually concerned — my judgments are few. If it’s safe and consensual, I say, hold your head high.

So I hereby absolve two objects of recent public sexual shaming: Gregory Viens, arrested in Moretown for sneaking into his boss’ barn to shtup the cows; and Idaho Senator Larry Craig, nabbed playing footsie with an undercover cop in a Minneapolis airport men’s room. In the first case, according to the Valley News, the local vets certified that “no harm came to the cows.” In the second, harm would have come to no one. Defense-of-Marriage Craig’s taste for the urine-scented assignation warrants no self-loathing, congressional investigation or arrest.

Still, the man isn’t off the hook. Of what should he feel ashamed?

The easiest way to describe Craig’s wrongdoing is hypocrisy, a word increasingly apt for the entire GOP. Indeed, as the deviant predilections and sex-crime convictions of a growing list of elected officials come to light (for a comprehensive catalogue, see http://armchairsubversive.com), the right wing of the party is beginning to look like the chateau in Pier Pasolini’s film Salò, where the upper echelon of Italy’s fascist officers enacts upon a group of youths the sexual tortures described in de Sade’s 120 Days of Sodom. It’s almost axiomatic that the most aggressive public moralizers are the perviest practitioners in private.

But the workings of shame make the discrepancy between Craig’s public “family values” stance and his semi-public “wide stance” more complicated than hypocrisy. Psychologist Elliot Aronson, whom I mentioned last month, notes that a person suffering cognitive dissonance labors internally to erase contradictions between his word and his deed, or between the way he sees himself and the ways others see him. As Aronson told Susie Bright in her always on-target blog, “Everyone can spot a hypocrite except the hypocrite himself.”

Self-justification isn’t just internal. The sociologist Laud Humphreys, in a much admired 1970 study of homosexual public sex titled “Tearoom Trade,” found that more than half of his men’s-room cruisers were married and living with their wives; only 14 percent considered themselves gay. To appear — and feel — certifiably straight, these self-described heteros commonly adopted fiercely conservative public personae. Humphreys called the posture a “breastplate of righteousness.”

In other words, when the righteous Larry Craig stands at a podium beside the wife and kids and proclaims, “I’m not gay,” he isn’t exactly lying. For one thing, Mr. and Mrs. Craig may regularly enjoy marital congress out there in Potatoland. But even if they don’t, if Larry doesn’t consider himself gay, who are we — especially those of us clamoring for a cultural and legal space between genders and sexual “orientations” — to call him gay? And if he honestly believes he isn’t gay, can we even call him a hypocrite?

The one label the senator has undeniably earned is bigot — even if his actions stem from self-hatred. For his long and valiant crusade to encode his homophobia as the law of the land, he should be truly ashamed.

At first, Craig’s humiliation seemed to have inspired humility. In his resignation speech, he confessed — five times — that he was “humbled” by the support of his family, his friends, his constituents and numerous Idaho party apparatchiks (congressional Republicans went notably unmentioned). Did he feel he didn’t deserve it? And why? Hard to say; he was vague. For a moment, I fantasized the senator, brought low by his own misguided legislative philosophy, repenting, being born again in true brotherly love and tolerance, and making amends to all those who have been similarly persecuted.

Then I snapped awake, probably to the voice of Michele Norris on “All Things Considered” reporting that Craig had already decided to fight to reverse his guilty plea, in hopes of retaining, if not his Senate seat, then a shred of his reputation. In the meantime, Senate Republicans will have to employ an ethics investigation as suspects use their jackets in a perp walk, to cover their own sullied heads.

Many political commentators have suggested that laws such as the Defense of Marriage Act “drive” gays and lesbians to desperate acts in public places because they can’t do it legally — say, after putting the kids to bed and watching a rerun of “Law and Order.” I repeat: Nobody should be arrested for the victimless crime of consensual sex. But some of us wonder sadly what will happen to eros when there is no more shame, which by definition always has its public side: It is a set of socially enforced and personally internalized rules of conduct. Consciously or not, Larry Craig may be wondering the same thing.

Shame can kill libido. It can also be a powerful aphrodisiac. I suspect that many gay men of the generations that came of age before Stonewall forged deep erotic associations between getting off and the possibility of getting caught. Younger gays, growing up in somewhat friendlier times, may not relish rough or risky public sex as much as their older brothers did. But the fact remains: For a hit of forbidden sex, plenty of people will drive themselves to the docks, the dunes or the alley. Or take a plane to the airport rest room. Repressive laws keep the thrill of risk alive by keeping the danger of apprehension real. Politically and erotically, a guy like Craig gets to have his cock and eat it, too.

In the end, Craig’s wrongdoing isn’t a matter of saying one thing in public and doing another in private — and not just because what he did, or was about to do, happened in public. As both supporters and opponents of same-sex marriage or gay service in the military know, sex laws are not just about “privacy” rights. Sexuality is a social fact, and expressions of desire and identity — from wearing a dress and a beard to smooching under a streetlight — are public, political acts.

The Religious Right has scoured the public space of sexual speech and images, as well as sexual acts. It counts on the threat of sexual stigma to silence potential objectors. Then, once in a while, a guy bent on scouring, like Larry Craig, gets scoured. It’s a shame he can’t feel ashamed of the former, not the latter.