Confessions of a slow cooker 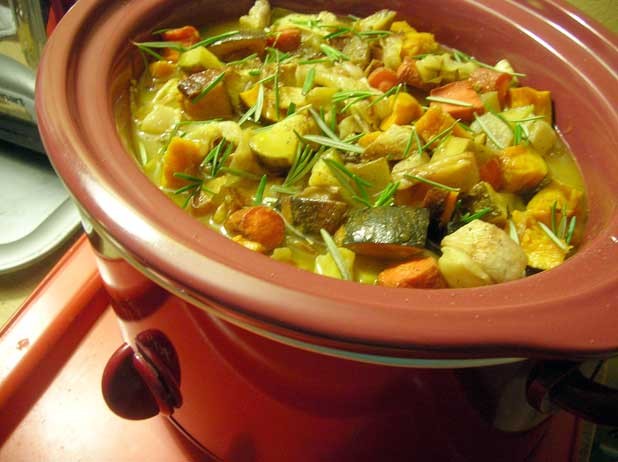 The heavenly scent of rich tomato sauce greeted me as I unlocked the door to my apartment building on a recent evening. Must be the downstairs neighbors cooking something awesome again, I thought as I climbed the stairs. But then I realized the tantalizing smell was coming from my kitchen. Oh, yeah — the Crock Pot! Dinner was ready, and I hadn’t even taken my coat off yet.

My path to plug-in cuisine has been a crooked one, because use-specific kitchen appliances weird me out. Case in point: I proudly continued whipping cream and meringues with a whisk for years after receiving a Kitchen Aid mixer, until a complex layer cake recipe wore out my wrist. Slow cookers — electric pots with stoneware inserts that steadily transform foods via long exposure to low heat — seemed like equally large, frivolous items to squeeze into small cupboards. And for me, the devices raised as many questions as they seemed to answer: If I needed to spend time laboriously prepping each dish before leaving for work in the morning, was the convenience of ready-made dinner worth the a.m. fuss? Was it really safe to leave it on all day? And as a consumer and avid cook of local, fresh ingredients, could I really get mileage out of a meal-prep method whose recipe canon — based on my online research — included copious amounts of canned cream-of-mushroom soup?

When a friend moved across the country and bequeathed me her 4-quart cooker, I was willing to try it out — in theory. But whenever the opportunity arose to actually use it, I left it on the shelf, favoring, and savoring, more familiar habits. Stories of slow cookers yielding rubbery chicken and watery stews scared me. I could cook well on a stove and in an oven, so why risk ruining perfectly good food? Then another 2.5-quart pot came to me from midwestern relatives this winter, and I decided to see whether I really needed, as my mother-in-law kindly urged, “multiple sizes” of the things, or whether they were destined for the yard sale. I sat down, read the manuals and got cooking.

Slow cookers — aka “crock pots,” after a popular brand name — are different, in that they run by an upside-down, bizarro set of cooking principles that are counterintuitive to conventional baking, broiling, braising and simmering. Beans — particularly kidney beans — need to be soaked and pre-cooked, lest they end up underdone and potentially poisonous. (The glycoprotein lectin is the culprit, but it breaks down and becomes harmless when the beans are boiled for 10 minutes.) You can add rice to dishes, but the requisite water ratio is different, and must be carefully measured. Subjected to a crock pot’s low heat of less than 200 degrees Fahrenheit for several hours, dairy products tend to turn rubbery. Still-active vegetable enzymes that disappear at stovetop temps will leach vitamins from tender vegetables such as peas, beans and corn if they aren’t blanched before slow-cooking. Veggies also take longer to cook than meats, even if they’re cut into identically sized pieces. And everything has more liquid; there’s rarely a need to add water, since none boils or steams away.

If you know what you’re doing, though, a slow cooker can make the most of inexpensive cuts of meat, transforming brisket and stew chuck into something special. Attempts to raise genre standards include the 2003 cookbook The Gourmet Slow Cooker: Simple and Sophisticated Meals from Around the World, but a quick perusal of that and other fancy treatments of crock-pot fare shows the authors tend to assume you are willing to stand around and stir the pot at frequent intervals, periodically adding and removing ingredients. Those recipes purportedly yield great slow-braised, flavorful dishes, but I was planning to be out of the house all day. Problematically, the “dump and go” methods that were the most convenient (put ingredients in pot, turn on, leave) seemed to have the highest “rubber” risk. I wanted my slow cooker to deliver meals that were the best of both worlds — nutritious, easy and economical, but more Babette’s Feast than Better Off Dead.

For my first-ever experiments, I stuck with a medley of stews. They’re all trusted family recipes I’ve been making for years that I was confident would convert well to electrification. One of the hardest things to remember, particularly on weekend days when I was actually at home, was the “no peeking” rule: Because slow cookers operate at such low temperatures, it’s important to never lift the lid until the dish is done, lest the heat loss set the process back an hour or more. I also learned that it’s possible to shorten cooking time by using the “high” setting in lieu of “low” — in roughly a 1-to-2.5 ratio — but I usually preferred the slower, lower heat because it suited my schedule better. Other caveats included never cooking anything on the “warm” setting and never putting prepped uncooked pots with raw meat in the fridge overnight before starting them the next morning, since in both cases the contents won’t come up to a safe temperature soon enough to avoid risking bacterial growth.

Despite a rep for workaday cuisine that dates from their late-1960s debut, slow cookers can turn out tasty meals for minimal effort, sort of like Strega Nona’s magically prolific pasta pot. (Unless you’re feeding a family or have a slow cooker on the smaller side, leave fridge space for leftovers — not enough to fill a town square, but plenty for the following day’s lunch). The machines have their good points: They’re energy efficient, using 22 times less power than an electric oven. As long as you follow the usage guidelines of keeping liquid in the pot and never immersing the heating element in water, they are indeed safe to leave unattended all day. And on busy days when I arrive home ravenous, having a ready-made meal is pretty super.

Now, for minimal effort, I can cook up a hefty gallon of goulash at the drop of a hat. I won’t want to eat rich, sour-cream-spiked stews when the weather warms up, but with these recipes under my belt, I finally feel comfortable imagining — and improvising — other crock-pot possibilities. For a spring lamb stew with peas, carrots and dumplings, I know I’d add and cook the dumplings on “high” after getting home, then stir in frozen peas at the last minute — that is, if I couldn’t add freshly shelled ones 10 minutes earlier. Healthy cuisine from the Mediterranean isle of Crete uses lots of very slow, low-temperature cooking — and I happen to have a Cretan recipe for fennel-and-octopus stew that’s ripe for slow-cooker adaptation, assuming I can acquire the appropriate eight-legged cephalopod.

The official Crock Pot brand website lists a soufflé-like bread-pudding dessert that includes dairy; if that works, why not a cheesecake, slow-cooked on “high” in a 5-inch springform pan, suspended on a rack over a little water? And summer garden ratatouille concocted without having to turn on the stove in an already-hot August kitchen? Definitely worth waiting for.

All recipes except the breakfast oats are intended to comfortably fill a 4-quart cooker. Viva leftovers!

Put beef, onion and garlic in slow cooker. Add flour and stir to coat steak cubes, then add thyme, salt, pepper, paprika and tomatoes and stir again to blend well. Cover and cook on low for 8 to 10 hours. Half an hour before serving, stir in sour cream. (Adding the sour cream earlier will denature its proteins to stringy clumps, thus changing the goulash’s velvety texture.) Serve over wide egg noodles.

If using dried fruit, soak it in 1 cup boiling water for half an hour before adding it with the rest of the ingredients listed below. Put lamb in slow cooker. Add flour and stir to coat lamb, then add cayenne, cinnamon and salt, and stir again to distribute evenly. Add the rest of the ingredients and stir well. Cover and cook on low for 8 to 10 hours. Serve over couscous, with mint tea on the side.

My parents learned this recipe from a Nigerian grad-student friend when they were in college. In homage to its originator, my dad always makes this dish flamingly hot, but chile peppers are a matter of taste. I had a can of chipotles in the cupboard, and was pleased that the adobo sauce in which they were preserved added a smokiness which made the stew taste like it was cooked over a campfire. This would also work with two fresh chipotles or a fresh habanero, seeded and diced. Always wear gloves to prep fresh, hot peppers! If you only have dried chiles, use those. Amounts vary. Season according to how hot you like your food, and the spiciness of your particular pepper at hand.

Properly done, the skin and bones of the chicken should be nearly disintegrated from long, slow simmering — an effect tricky to achieve on a stovetop without burning the bottom, but one perfectly suited to the slow cooker.

6 chicken drumsticks and/or thighs, skin and all

4 canned chipotles in adobo sauce (or another hot pepper)

Layer onion wedges on bottom of slow cooker. Add bell pepper and chicken. Add half the diced tomatoes. Using the back of a spoon, blend the tomato paste and salt with the remainder of the diced tomatoes in the can, to insure even flavor; add to cooker. Poke chipotles under the surface of the tomato sauce, and cover all with the adobo (if using; should be about 1 or 2 tablespoons).

Cover and cook on low for 10-12 hours. Five minutes before serving, stir in spinach leaves and cover. Serve over white rice.

I love steel-cut oats, but they’re sometimes impractical to make in the morning because even when pre-soaked, they take a while to cook on the stove, and they boil over if not watched closely. This way, they’re ready when I wake up.

Combine ingredients in slow cooker. Be sure to stir salt in well, or you might end up with pockets of variously seasoned oats. Cover and cook on low for 6-8 hours. Serves two.