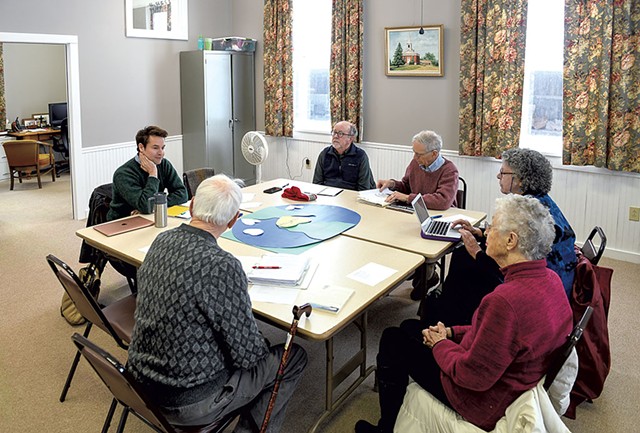 For Daniel Cooperrider, pastor of the Weybridge Congregational Church, the climate crisis has spiritual roots. "If you dig a little deeper, carbon emissions have to do with our misplaced moral and spiritual values as a society — greed, excess," he said. "Not every church is talking about these things. But we probably mention climate change and the environment in every worship service."

Cooperrider, 35, is younger than his average parishioner by a decade or two. His sense of spirituality began as a deep connection to the lakes and rivers near his family's cabin in Wisconsin. Eventually, he realized that his experiences in nature were, as he put it, "no different from encountering God" — a sense of communion with something infinite and sacred.

Cooperrider came to Vermont to lead Weybridge Congregational Church in 2013, in part because he felt that its members shared his kinship with the environment. That kinship, Cooperrider believes, is also an obligation, a moral duty to care for the natural world that fossil-fuel-driven narratives of progress have neglected.

The 80-member Weybridge Congregational Church is part of a growing movement called "creation justice," a faith-inflected activism that applies a Christian lens to the climate crisis. Last month, the church began the practice of "creation justice pledging" — a voluntary commitment to making lifestyle changes in the name of better environmental stewardship. Members selected from 21 suggestions, compiled by the church's environmental leadership team, ranging from lower-investment habits, such as bringing reusable shopping bags to the grocery store, to more resource-intensive undertakings: installing solar panels, buying or leasing an electric car, or making a donation to offset one's carbon footprint.

According to Cooperrider, 15 people submitted pledges — a somewhat disappointing turnout, he admits, which he chalks up to low Sunday attendance during the depths of winter. But Cooperrider said he was heartened by the fact that those who pledged committed to an average of seven new habits, with 108 pledges in total. At a time when eco-anxiety is running high — a recent Vermont Public Interest Research Group found that 61 percent of Vermonters are "very worried" about climate change — Cooperrider believes that even the smallest actions can be spiritually restorative. "Anxiety and despair are penultimate responses," he said. "We're trying to spend more time on hope."

"We've made some significant missteps in our relationship to creation." Pastor Daniel Cooperrider tweet this

The creation justice pledges were the brainchild of David Andrews, one of eight members of Weybridge's environmental leadership team. Andrews, 75, a retired minister who preached at the Congregational Church of Middlebury, joined the Weybridge church specifically because of its ecological focus. For the past few years, he's been charging himself a carbon tax of 10 cents per gallon of gas for his 2017 Subaru Forester ("I feel a little guilty about it, but it's so good in the snow," he confessed). Last year, Andrews donated $300 of those funds to Vermont Interfaith Power & Light, a network of religious communities that shares resources and information to fight climate change.

For his January creation justice pledges, Andrews committed to minimizing his car use — a more feasible sacrifice in the warmer months, when he can ride his electric bike the four-mile distance between his home in Middlebury and the church. He also resolved to limit his air travel, joining a growing contingent of people galvanized by "flight shame," one of the climate-related neologisms short-listed for Oxford Dictionaries' 2019 Word of the Year.

"We tried not to be too heavy-handed in coming up with this list," said Andrews. "I'm sure there are people in the church who think our emphasis on the environment is a bit much. But for me, these actions are essentially an antidote to depression."

As the climate crisis infiltrates virtually all forms of public and private discourse, faith groups have become increasingly visible proponents of environmental causes. Over the past decade, the notion of "creation care" has come to signify environmentalism with Biblical antecedents, an extension of the belief that human beings are tenants of the Earth, not its masters. The concept has permutations across the religious spectrum — Jews, for instance, talk about "Jewcology;" Muslims use the term "eco-Islam."

In Cooperrider's view, Vermonters tend to be highly attuned to the sacred in nature, regardless of whether that attunement is grounded in religion. In each worship service, he includes a creation care moment — a scriptural reading, a Mary Oliver poem, a scientific article on biodiversity loss. After Greta Thunberg gave her trenchant speech at the United Nations' Climate Action Summit in New York City last year, one of the members read it to the congregation.

The United Church of Christ, or UCC, the national Protestant denomination with which the Weybridge Congregational Church is affiliated, has a history of social activism. In 1972, it became the first mainline Christian group to ordain an openly gay pastor at one of its churches; more recently, the church has publicly backed marriage equality, transgender rights and the Black Lives Matter movement. Last year, the UCC's governing body officially endorsed the Green New Deal, becoming the first major Christian denomination to support the congressional resolution.

Norwich resident Jim Antal, a climate justice adviser to the head of the UCC, has written and spoken widely on the climate crisis and its spiritual underpinnings. In his view, the current ecological situation requires both Christians and non-Christians to stop thinking of themselves as individuals.

"Over the last few centuries, Christianity has become hung up on the question of 'What's going to happen to my soul?' It hasn't always done an adequate job of addressing systemic inequality," Antal said. "At this point, hope in individual salvation is completely inadequate. And the Bible actually has much more to say about collective salvation than individual salvation. I think the critique of capitalism offered by Naomi Klein and Elizabeth Warren can be Christianity's critique of capitalism."

While faith leaders in the climate justice movement aren't necessarily unified by political ideology, the church can provide a structure for activism that often brings political issues to the surface. The Champlain Valley Unitarian Universalist Society in Middlebury, which belongs to an interfaith climate consortium in Addison County that includes Weybridge Congregational Church and six others, has hosted talks by Extinction Rebellion; several members of CVUUS are actively involved in the group.

Barnaby Feder, minister of CVUUS, said the climate crisis has transformed the way he thinks about his work. "Every week, when I'm writing a sermon, I ask myself, 'What's the climate angle on this subject?'" he said. "There's almost never a week when we don't address the climate crisis in some capacity, even if it's not the central point."

Feder sees the climate crisis as a convergence of social issues — and, in a sense, a prism of class privilege. "If you're struggling to make ends meet, you're just trying to get through the week," he said. "You would never intellectually deny the climate crisis, but you don't have the resources to dedicate your time to it."

As the pastor of a small, rural congregation, which worships in a 173-year-old chapel heated by an oil furnace, Cooperrider understands those material constraints. But in spite of Weybridge's relatively limited means, at least in comparison to the capital footprint of large corporations, Cooperrider believes the church's financial priorities should align with its spiritual values. Four years ago, the church divested its $300,000 endowment from the fossil-fuel industry. And the creation justice pledges, even the smallest ones, represent a tangible act of hope — which, Cooperrider is quick to point out, isn't the same thing as optimism.

"Hope reveals that you believe something is true and beautiful and worthwhile, regardless of the outcome," he said. "I think religion is integral in keeping us in touch with more positive responses to the world — joy, wonder, amazement at the miraculousness of existence."

Heidi Willis, a retired first-grade teacher who attends the church, has committed to foregoing meat twice a week and purchasing an electric vehicle with the help of the state's financial incentives. Like Cooperrider, she isn't optimistic about humanity's long-term prospects: "In my more lucid moments, I'm not so sure we're going to get out of this," she said.

But recently, on a particularly brilliant day after a snowstorm, she found herself overcome with gratitude for the play of light on the ice-covered trees. "I just looked around," she said, "and all I could think was, Thank you, thank you, thank you."