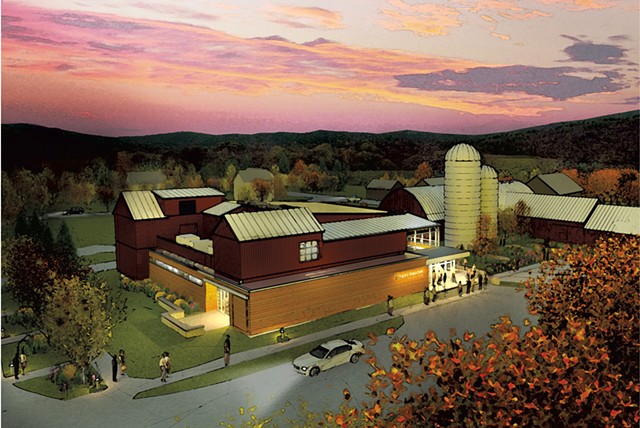 Last weekend, the Weston Playhouse broke ground on its new state-of-the-art theater compound on the Walker Farm in Weston Village. The $10 million capital and fundraising campaigns that began in 2007 will add a $6.5 million black-box theater to the company's main stage. The grounds will contain flexible performance, rehearsal and community spaces to accommodate the creation of more experimental theater, along with space for administrative offices and artist housing.

The endeavor goes beyond just creating a new venue. It represents Weston Playhouse's aim to evolve from a summer-stock regional theater — albeit a highly regarded one — to a "theater arts incubator," according to the company's website.

The Playhouse already has a robust tradition of supporting new works. Now the goal is for the new Center for the Arts at Walker Farm to become a nationally recognized destination for playwrights, composers, directors and producers to hone their artistic skills, create new works and launch them nationally.

The budget incorporates an endowment to support educational outreach and the Weston Playhouse Young Company — a summer program that recruits undergraduate talent to perform in a children's play, participate in nightly cabaret shows and take master classes. Additional funds will support new Weston programs, including an annual artists' retreat.

With the expanded facility, the Playhouse is also looking to fill community needs. Adding a second stage will allow the company better to serve local schools with scholastic productions and curricula, among other things.

The Walker farmstead was a dairy farm for more than a century, owned and operated by the Walker family. Gladys Walker was one of the founding performers at the Playhouse when it opened its doors in 1937. In those Great Depression years, the theater served as a much-needed community center for the town, according to the Playhouse's website. The Walkers have remained longtime attendees of Playhouse performances, and it seems only fitting that the farm's next act is to grow a theater.