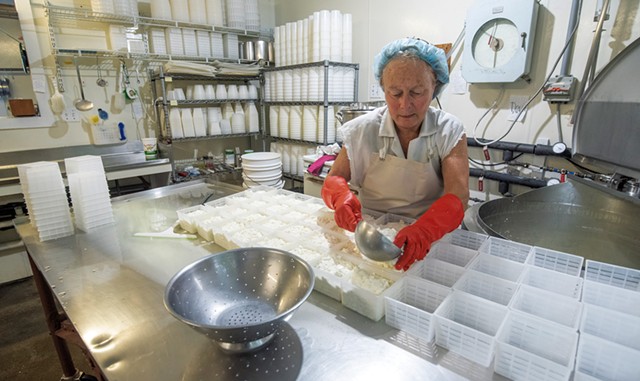 Laini Fondiller apologized before bringing a visitor into her barn on a recent morning. Friends had dropped by her Lazy Lady Farm, and she was behind on chores, including cleaning the dairy goat pens.

The farmer-cheesemaker hardly needed to make excuses. Aside from the lightly soiled pens, where her 40 goats spend the few hours per day when they're not out on pasture, the barn was spotless. It smelled sweetly of hay, floors swept clean, and supplies arranged neatly on shelves or tucked between beams.

A pair of large wooden milking stanchions reminiscent of oversize chairs stood in one corner of the barn. Fondiller, 69, wakes every day at 5 a.m. to prepare for morning milking. Two goats at a time, "it takes me two to two and a half hours," she said. "I have ADHD. Sometimes I get distracted and decide to fix something."

For 35 years, in a rural corner of Vermont, Fondiller has been quietly farming, making cheese, and earning a steady stream of American Cheese Society ribbons and articles in the national press. As New York cheesemonger Anne Saxelby told the New York Times Magazine in 2009, in America, "there are few well-made, French-style goat cheeses ... Laini was one of the first."

Fondiller started her off-grid operation in 1987 on 25 acres owned by her partner, Barry Shaw. They later added 10 more acres. "There was no electricity here — zip, zip, zip," she said. "We used kerosene lamps."

Farmstead cheesemakers use milk from their own herd or flock. Fondiller milked by hand for 13 years until the couple added solar panels that could power a vacuum pump system. "I've had two carpal tunnel operations," she said. 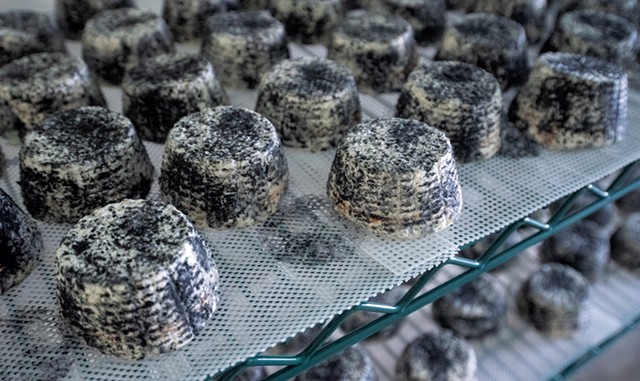 Among the nine staples of Lazy Lady's varied line of cheeses are Les Pyramids, a nutty, wrinkly rinded cheese; and La Petite Tomme, a creamy, mushroomy Brie-style disc. In 2018, the latter made Bon Appétit's list of the 25 most important cheeses in America.

At this point, many people would be considering retirement or developing a succession plan — but not Fondiller.

In the Times feature on Lazy Lady, Fondiller credited her productivity and drive to attention deficit hyperactivity disorder; she is the opposite of her farm's name.

Though Fondiller applies herself seriously, she has fun with her work. The Times highlighted some of her tongue-in-cheek cheese names: Tomme Delay was a tomme, or round cheese, named for the former U.S. House Republican from Texas. Barick Obama was a reference in name only — not cheese style — to Midwestern brick cheese, inspired by the then-Illinois state senator. A more recent example, Biden His Time, was flavored with thyme.

Fondiller's wit aside, Saxelby said in the Times that "she's always creating something new, which is rare for a cheesemaker to do. It's even more rare for them to do it well."

When Fondiller started milking her original goat, Blooper, she was revitalizing the European tradition of on-farm cheesemaking that had been all but abandoned in the U.S. Today, there are more than 40 Vermont dairy farms making cheese, yogurt and other products from their own milk. Fondiller has influenced and informed many of them. "I like to help," she said.

"Laini literally reinvented the wheel," Saxelby wrote by email to Seven Days. "There were no technical resources available for small cheesemakers, no cheesemaking equipment, and there were virtually zero viable options for sourcing dairy goats in the U.S. By sheer force of will, gumption and a talent for both the technical aspects of cheesemaking and the animal husbandry aspects of raising dairy goats and improving their genetics, she created something completely unique that inspired legions of future artisan cheesemakers."

Hannah Sessions of Blue Ledge Farm in Salisbury counts Fondiller among the pioneers who built consumer demand for artisanal farmstead cheese. "She is a legend," Sessions wrote by email. For Vermont goat dairies like hers, Sessions added, being able to buy Fondiller's top-quality breeding stock has made a huge difference. "Lazy Lady genetics will have a profound and lasting impact on goat farming in our area," Sessions said.

Fondiller meticulously breeds and cares for her registered Alpine and Saanen herd and generally prefers goats over people. "They have a lot of personality," she said.

Her career came out of the blue shortly before her college graduation, when she befriended a farm family. "It was one of those epiphany moments," Fondiller recalled. "I just knew it was what I wanted to do." 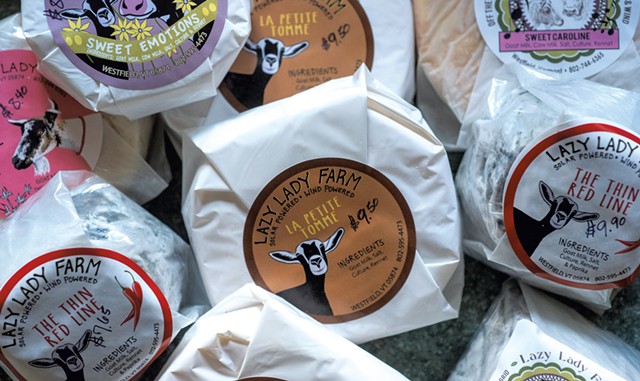 Friends in Massachusetts led her to a job on a hog farm there. In 1977, she followed another friend to northern Vermont and switched to dairy. "It wasn't easy," she said. "They weren't really hiring women. At the time, I weighed about 100 pounds. They'd say, 'You want to do this, little one?' They busted my balls."

The work was "brutal," Fondiller said, especially for a $25 to $50 weekly paycheck. But she persisted. "It felt like an accomplishment to get on the tractor, to wrestle with the beasts," she said.

The camaraderie was another draw. "You were part of something, and it was a real good feeling," she recalled. "There was no concern about going into town dirty. Everyone had farm boots on."

To earn more money, she spent three winters working in California ski areas and made French friends there. In 1981, those connections landed Fondiller in France, where she sought out farming jobs.

On the island of Corsica, Fondiller worked at a goat dairy that produced a cave-aged cheese and a ricotta-style cheese. "That started it: my introduction to the cheese world," she said.

In the French Alps, she tended sheep for a summer high in the mountains; the flock's owners delivered food weekly, including their own cheese and always a fruit tart.

After about two and a half years, Fondiller was kicked out of France for lack of work papers. Back in Vermont by the mid-1980s, she met Jack Lazor selling yogurt to a restaurant in Randolph, and he offered her a job. Jack and his wife, Anne, had started Butterworks Farm in Westfield in 1976, making yogurt and butter from the milk of their Jersey cows.

They paid her $150 a week, most of which she saved. "I came from poverty, zip, zero," Fondiller said. She met Shaw, a neighbor of the Lazors, and started growing vegetables on his land and making cheese in their kitchen from her first goat's milk. She sold her products at farmers markets.

"I lined a closet with plastic to drain and age the cheese," she said.

The Vermont Agency of Agriculture, Food and Markets eventually caught wind of the small swell of home-based dairy producers and cracked down with food safety regulations. By 1993, Shaw had built Fondiller a compact, dedicated cheese room off their home.

Nine years later, she paid off a delinquent $3,000 college debt and secured $30,000 from the Vermont Community Loan Fund to construct her current stand-alone, on-farm cheese room.

Regional specialty distributors take Lazy Lady cheeses to Boston, New York City and even California. Vermont co-ops and specialty stores stock them, and the petite cheesemaker with her brightly dyed hair is a year-round fixture at the Montpelier Farmers Market.

"It's my only socialization," she said. "People tell me their stories. They bring me presents."

When Seven Days visited Lazy Lady, employee Abby Heald had just finished making a batch of the Thin Red Line, an ash-coated cheese with a smoked paprika line through its center. Lined up in plastic baskets, the cheeses drain overnight before being flipped out, salted and sprinkled with ash to dry for a few days. Then they go into the farm's aging cave.

Lauren Gitlin was working as a cheesemonger in New York City when she was captivated by the 2009 Times profile of Fondiller and resolved to work with her. Gitlin vividly recalls her first taste of Les Pyramids. "This was as good and probably better than anything I'd had [from France]," she said.

Gitlin eventually landed a job at Lazy Lady in 2014. She credits Fondiller with motivating her to start her own farmstead dairy: Villa Villekulla Farm in Tunbridge.

"Laini was so dedicated to her animals and to her farm and to doing things the right way," Gitlin recalled, "even though that often meant the hard way. And not ... for the sake of it being hard but ... because that was what was in alignment with her values." For example, Gitlin noted, because the wind- and solar-powered farm cannot support a refrigerated bulk tank, Fondiller makes frequent, small batches of cheese.

Fondiller's boundless curiosity inspires Gitlin. "She's always tinkering," Gitlin said. "She never plays it safe. She wants to always push herself to do more and to learn more."

"My thing now is geo," Fondiller said of Geotrichum candidum, a yeast that creates a wrinkly rind, "and washed rinds, but not the really stinky ones. And I'm doing a lot more with herbs like thyme and saffron."

She makes special batches of cheese "whenever they pop into my head," Fondiller said. "I don't know if it's the best method for a business," she added with a laugh.

Fondiller has never had any interest in scaling up beyond what she, Shaw and a few employees can handle. "I don't have the genes for any of that stuff," she said. She declined to share revenue figures but said, "We pay our help well. We pay ourselves. We stay out of debt and keep our heads above water."

She did admit that she's getting a little "burnt out and old." This year, Fondiller began making cheese five days a week instead of six or seven, and she may trim her herd by about a third to reduce milking time.

"When it goes, it goes," Fondiller said of her business. "I'm not planning to sell. Everybody thinks that's bad, but it's mine. It wouldn't ever be the same."

The original print version of this article was headlined "Busy Lady"