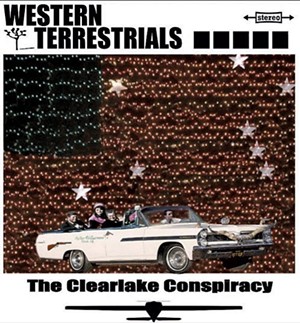 Dating back to his days with Pariah Beat, Vermont songwriter Nick Charyk has never been shy about wearing his country influences proudly on his tattered-denim sleeves. On The Clearlake Conspiracy, the recently released debut album by his new band Western Terrestrials, Charyk unapologetically lays bare the artists who conspired to inspire him. In fact, most of them show up in the span of a single song: "WWWJD (What Would Waylon Jennings Do?)"

The tune is a dead-on pastiche of the late Jennings' own cheeky nod to bygone honky-tonk heroes, "Are You Sure Hank Done It This Way?" Indeed, a who's who of country greats parades through the Terrestrials' version, either name-dropped by Charyk or hinted at through various clever lyrical twists and musical cues. Among others, there's June and Johnny (Cash and Paycheck, thank you very much), George and Tammy, Hank, Gram and, of course, Willie, Waylon and the boys.

Released in 1975, Jennings' song was a brazen middle finger to the country music establishment. Jennings isn't around to browbeat modern pop-country acts like Luke Bryan and Florida Georgia Line, so Charyk does the honors himself. "Today's country singers, they worship their heroes, they say," he sings with a punch-drunk snarl. "But can you tell me with a straight face that ol' Waylon woulda done it this way?"

Given Western Terrestrials' affinity for and adherence to a vintage country aesthetic — from their pedal steel-plated sound to their cowboy shirts — a cynic might turn that question around on Charyk: Are you sure Waylon woulda done it this way?

It wouldn't be fair to expect Western Terrestrials or anyone else to live up to Waylon, Willie, et al. After all, they practically invented their own subgenre, outlaw country. But over the course of The Clearlake Conspiracy's nine songs, Charyk and co. — including Pariah Beat's entire rhythm section — do deliver a rowdy and entertaining spin on honky-tonk that should satisfy country purists and progressives alike by hewing to sonic traditions and writing with modern sensibilities.

The lead track, "Automated Trucker Blues," is a fine example of that juxtaposition. Fueled by Asa Brosius' rolling steel, Charyk's entry to the trucker-song canon bears shades of Robert Earl Keen's snarky wit. It's nice to know that we'll still have good trucker songs when Google inevitably takes over the highways.

Charyk continues to pay homage to the classics throughout the album. The dusty rocker "Ashes to Ashes" genuflects to Copperhead Road-era Steve Earle. Bleary-eyed and funny, "One to Remember, Two to Forget" is a drinkin' tune Paycheck himself might have been proud to write — assuming he'd remember he wrote it. Ditto "Drink You Off My Mind," on which Charyk, to great effect, sings as though he's really been trying to forget.

At times, Charyk's hero worship is heavy-handed, as on "Stranded at the Rodeo." A nod to the Byrds' 1968 record Sweetheart of the Rodeo, which introduced Gram Parsons, the song paints the late singer as a honky-tonk Jesus: "And Gram Parsons died so country music could be free," sings Charyk.

But, more often than not, Charyk and Western Terrestrials channel the spirit of classic country in a way that honors the genre's timeless appeal. As Charyk sings on closer "Hank Williams' Cadillac," "When the radio is playin' a high and lonesome tune / I get restless, reckless and blue."

The Clearlake Conspiracy is available on major streaming services. Western Terrestrials play on Saturday, October 5, at Sweet Melissa's in Montpelier.