Western Terrestrials, Back in the Saddle of a Fever Dream 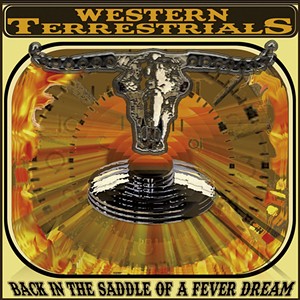 I love when a record has a big mood. And if the two overriding themes driving that mood are outer space and the lonesome West? Yippee ki-yay, parental fornicator!

Vermont's oddball alt-country outfit Western Terrestrials deliver the peanut butter and jelly of genre tropes on their newest album, Back in the Saddle of a Fever Dream. Recording partly in Nashville, Tenn., the Terrestrials shook off natural disasters and a pandemic to deliver a record that feels as consistent as it is stylized.

Opener "Space Cowboy's Got the Blues" ushers the listener right into the album's vibe: loneliness, paranoia and tongue-in-cheek humor. "When that cosmic wind starts whipping around the astral plains / E.T. can't phone home from the range / Like an old coyote howling at the moon," croons bandleader Nick Charyk. Then, "Yeah, this space cowboy's got the blues."

Western Terrestrials exist as an outsider sort of country band, sound-wise. Not so much outlaw country as retro-futurism country, with a wink and a laugh to go along with it. In the press release for the new record, Charyk describes the band's last record, The Clearlake Conspiracy, as somewhat antagonistic toward Nashville. With Back in the Saddle, he wrote, the band wanted to display its bona fides and showcase its deep country roots.

Never let it be said that the Western Terrestrials half-ass anything. If your band is looking to connect with the DNA of country music, it's hard to beat scoring the daughter of George Jones and Tammy Wynette as a collaborator. When Georgette Jones takes a verse on "Who's Gonna Fill These Boots?" and sings — rather gloriously, at that — of her reverence for the tradition she's stepping into whenever she takes the stage, it's hard not to imagine the band feeling the same.

"Roger Miller Time" further cements the Terrestrials' tweed cred. Produced by and featuring Roger Miller's son, Dean Miller, on vocals, the track serves as an ode to playing the country legend's songs when feeling down in the dumps. "My baby hates when I play Roger Miller songs," Charyk admits.

Next up is a songwriting duet with Ketch Secor of Old Crow Medicine Show fame — aka the dude who finished writing a Bob Dylan song, "Wagon Wheel," and subsequently got huge. Turns out Secor is a big fan of the Green Mountain State, as he and Charyk out a variety of famous Vermonters as extraterrestrials in "Ethan Alien." (Bernie Sanders and the Dos Equis dude are aliens, but not Calvin Coolidge, if you were wondering.)

The band goes to great lengths to display its beating country heart, but it really doesn't have anything to prove. Charyk's songwriting is quirky and esoteric at times, but it is unmistakably rooted in a love for the Grand Ole Opry sound. Charyk also handles vocals and guitar and is joined by two members of his old outfit, Pariah Beat: Jason Pappas on bass and Jared Croteau on drums. With Alex Kelley on keys and Asa Brosius providing the all-important pedal steel, Western Terrestrials sound exactly how they want to.

For a record that is obsessed with the past, Back in the Saddle of a Fever Dream still gazes upward into space, searching for UFOs. Download it at westernterrestrials.bandcamp.com.

Speaking of Western Terrestrials, Back In The Saddle Of A Fever Dream