RL Photo carves out a new studio in an old 'hood 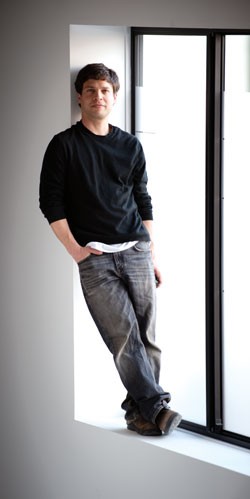 Sears Lane is a one-block cul-de-sac in Burlington’s South End whose cratered asphalt suggests years of neglect. Asked for directions to the street, even some locals might draw a blank.

But that unfamiliarity is sure to change, as several enterprises are setting up shop here, pumping life into the lane. Almost as soon as you turn off Pine, opposite Lake Champlain Chocolates, a new, cheery wooden sign on the left proffers the logos of Greers Dry Cleaning and RL Photo Studio. A bright-red dot surrounds the latter name. Move on a few dozen feet, and you spy a much larger version of that strikingly simple logo on the side of a gray-blue building. You could call the warehouse-y place nondescript, except that its row of artfully frosted windows makes it look like it’s wearing mirror sunglasses.

This is the new home of commercial photographer Rick Levinson, along with associate photographers Ryan Bent, Daniel Cardon and Dave Burnett-Menard; production manager Sarah Hays; and two resident dogs: a laid-back chocolate Lab named Jasper and a Husky mix named Maizey. Earlier this year, Levinson transformed a 5800-square-foot single room — which had sat empty for six years — into a bright, white, state-of-the-art studio. The high ceilings allow for tall partial walls, which now divide the space into multiple shooting areas, one with a seamless white “cyc” wall, or cyclorama, another with a black curtain. Additional partitions mark off a capacious storage area that currently holds racks of product from Burton Snowboards, Levinson’s biggest client — “We just finished a two-week shoot for them,” he explains. There’s a loft space for production work, and a reception area in the front that’s chock-full of paintings, photography and sculpture by local artists.

RL Photo looks like a happening place, and it is. You can almost imagine Levinson instructing visitors, “The red dot marks the spot.” That is, until you meet him, and then you can’t imagine him saying anything that corny.

On a recent weekday, Levinson, 35, is wearing a black Wilco T-shirt and black — not skinny! — jeans. A native of Richmond, Va., he has short-cropped, dark hair and a warm, open face that seems to be perpetually smiling. In fact, Levinson has a lot to smile about, even if he is working very long days. His A-list customers, in addition to Burton, include Lake Champlain Chocolates, jewelry designer Jacob Albee, Place Creative design firm, Maverik Lacrosse and Bogner. “From chocolates to sportswear to jewelry,” Levinson sums up. “In Vermont, you have to be willing and able to do everything.”

“Everything” includes being the house photographer for Higher Ground “since day one,” says co-owner Alex Crothers, who met Levinson when they were at the University of Vermont and Hamilton College, respectively. Levinson has shot a zillion shows at the South Burlington nightclub, and concerts that Crothers books elsewhere.

“Rick can capture the angst and tension of a metal band just as well as the subtle emotion of a folk singer,” says Crothers. “His range of vision is uncanny, because he’s always sure to look up from the camera to see the full picture.” Since the advent of rapid-fire digital cameras, Crothers adds, “Anyone can use a machine gun to kill a fly, [but] Rick shoots with purpose and needs only an arrow.”

Some of Levinson’s music photography is showcased in _ of 1500, a book produced in 2009 for Higher Ground’s 10th anniversary that documents club posters created by designers at JDK. He has also photographed merchandise and an album cover for Phish.

Levinson has cut back on some of his nightclubbing life since he and wife Tina had two daughters — Sadie, 4, and Ruby, 2. But don’t think he won’t be shooting at Wilco’s Solid Sound Festival — which Crothers produces — in North Adams, Mass., this summer. Levinson notes he’s “shot a lot of Wilco over the years.”

Though he formerly worked with fellow Burlington photographer Michael Sipe, Levinson says he’s been operating as RL Photo for 13 years. When he and Sipe parted company in January, Levinson found the Sears Lane space and set to work renovating it. The building’s owner, Marty Fitzpatrick, put in bathrooms and the HVAC system. A friend added the vinyl frosting to the windows, Levinson says, and not just to keep out prying eyes; inside, the windows admit a pearly, glare-free light. Levinson is still psyched about having a wide garage door — “You could drive a car in here,” he points out, and you get the impression he’d like to, just because.

With Burton’s headquarters right down the road in South Burlington, the convenience works both ways, says Burton brand marketing director Danielle Hambleton. She notes that Levinson has been with the company since well before she came three years ago, and for good reason. “He’s a super-passionate snowboarder, one, and he puts the same energy into his work,” Hambleton says. Levinson’s photos are used “for the catalog, the web, point-of-purchase displays, packaging — everything,” she explains, “and the quality is always right on.”

Evidence is contained in the pages of dealer books — hard-copy product catalogs made for buyers — that are neatly stacked on the coffee table in Levinson’s lobby-slash-gallery. “Everybody needs a dealer catalog,” he says, picking up one for Burton and flipping through pages of immaculately shot sportswear and gear. Clearly, this is a bread-and-butter gig. Today, though, Levinson is eager to talk about the images on the walls here — none of them commercial photographs.

Dubbed the Root, this space is curated by Burlington artist Clark Derbes, whose own geometry-inspired paintings and sculptures — as well as an evolving mural — join the works of eight other local artists. The two friends have ambitious, if still embryonic, plans for the nascent gallery. Levinson wants to establish a foundation, funded by a small percentage of art sales, that would give grants to young, aspiring artists — in elementary through high school — each year. He, Derbes and the exhibiting artists would make these selections together, he envisions. “We want kids to understand that art can be a profession,” Levinson says. “Or, if not that, that it’s OK to devote a lot of time to creating art.”

Derbes met Levinson eight years ago when Derbes was painting utility boxes around town — Levinson documented all of them, and is now the primary photographer for his friend’s prodigious output of art. When the new studio came together, “Rick said he wanted me to treat [the lobby] as my personal gallery space,” says Derbes. “I immediately filled the whole thing with my work. But after sitting with that for a few days,” he continues, “I thought it was too selfish to keep this to myself.”

Instead, Derbes began to invite other artists he particularly admires. “My goal is to create a stable of artists whose works really stand out,” he says. “People really dedicated to making work that challenges themselves despite the lack of commercial possibilities.” Philosophically, Derbes loves the art-education element of the Root, but admits that he — like Levinson — is wary of becoming a full-fledged gallerist. “The tricky part is making it happen without gobbling up a lot of time and money,” Derbes says. After all, he and Levinson are managing their own careers, too.

And that is exactly why visitors of any age need only look around RL Photo Studio to see artists in action, making a living.