Though it sometimes seems that way, not all the downtown weekend revelers are young and unattached. Saturday night I drove a married working man home from a night out with the boys. I could tell this was not a regular occurrence for this man with a wife and a couple of young kids at home. For almost the entire ride to his home near the Harley-Davidson dealer next to the Essex fairgrounds, he plied me with questions about the taxi industry.

"Is it easy to get a cab license in Burlington?" he got it started.

"It's too easy, in my opinion," I replied. "There's no limit on the number of cabs the city will allow. In most big cities, they regulate the number of taxis. Without a limit, it can become a race to the bottom 'cause nobody's making money. Burlington, unfortunately, is getting to this point."

"How do they limit the cab numbers?"

"Well, I can speak from experience about the New York City system. The number of cab licenses was fixed at about twelve thousand. I think this was in, like, 1952. So, in order to operate a yellow cab - which are the only ones that are permitted to pick-up random fares on the streets - you have to buy a license from someone who already has one. Because of this, it costs a small fortune to get into the taxi business in that town."

"Believe it or not, I believe a single medallion recently changed hands for over a half-million dollars."

"Medallion? What do you mean by 'medallion'?"

"Sorry, man," I said. I felt like I was in a 60 Minutes interview. "The medallion is this octagon-shaped metal tag that gives you the right to pick-up on the streets of the city."

"I understand. So you carry this around in the cab or something?"

"Nope, it's affixed - welded, I guess - to the hood of the taxi. Looks kind of cool, actually."

We turned at the Harley dealer and wended our way to the guy's house.

"Well, that's what I do for a living," he said just before we parted.

"I'm a welder at Velan Valve."

"It's a good company - plenty of well-paid, steady work."

Here's a replica of a NYC taxi medallion (fashioned as a clock) that my buddy, Don, picked up for me on a Big Apple vacation: 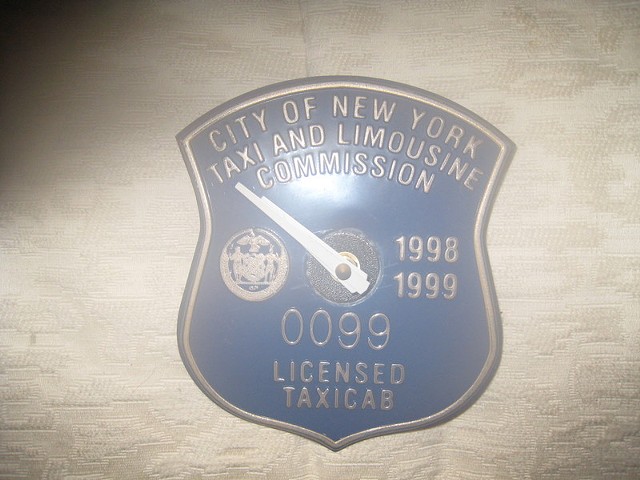