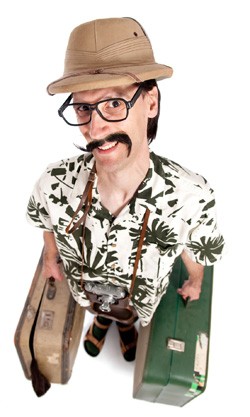 Driving west on Maine’s State Route 17, I was in a sweet mood. Paul and I had spent the week on the coast kayaking, cycling and swimming. Now, bikes on the rack, sun on my face and Maine public radio in my ears, I was in no hurry. I still felt the roll of the sea in my body.

Then a car pulled around and passed me — a sedan pitted by salt and age. Maine plates. An arm emerged from the window, a fist and an extended third finger.

Yup, I thought, everybody hates the tourists.

In the country, the tourists drive the back roads at 20 miles an hour, photographing cows. In the city, they waylay bus drivers with questions and bump into pedestrians as they gape at the tall buildings.

People on vacation can also be infantile, gauche and demanding.

But tourists are indispensable to many economies. A study for the Agency of Commerce and Community Development found that tourists in Vermont in 2011 spent $1.7 billion on B&Bs, balloon rides and Holstein oven mitts, plus $274.5 million in taxes. Landed summer people pay property taxes, which help finance schools and local services. Tourism is Maine’s biggest industry, accounting for at least one in eight jobs according to the Maine State Planning Office.

In other words, for the same reasons you hate them, you’d better love them.

In the country, that means acting friendly. The geography or the weather may be forbidding, but the people must be warm. Nobody expects a New Yorker or a Parisian to be warm. In fact, enduring abuse from a surly waiter or shopkeeper is the urban equivalent of facing a hard climb or a blizzard — part of the heroic masochism of travel.

But, as University of Vermont historian Dona Brown noted on Vermont Public Radio’s “Vermont Edition” recently, kindness has long been part of the state’s brand. In the 1880s, when the U.S. was rapidly industrializing, Vermont started selling itself as pastoral balm to frazzled city dwellers. At the same time, marketers were persuading farmers to welcome the city folk — a profitable “crop.” The tough and taciturn Vermonter wasn’t going to bring in the bucks.

Of course, smiling and coddling are part of every service job, from nursing to retail clerking; the sociologist Arlie Hochschild calls it “emotion work.” But “hospitality” requires more. It’s one of the last jobs (I can also think of butlership and shoe shining) that entail servility. Servility goes beyond generosity to self-effacement, beyond patience to gratitude for the gifts the customer is bestowing — for the customer’s very existence.

In a tourism-dependent economy, moreover, hospitality isn’t required only of hospitality workers. Every resident is expected to put up a welcome sign.

In the past, the adjustment wasn’t all in one direction. “When in Rome…” was the rule of travel. In Montana you didn’t ask for the New York Times. The French didn’t speak English.

But, I’ve noticed lately, that expectations is flipping. No matter how “exotic” the locale, visitors want it to be just like home. Our Maine landlady’s daughter manages vacation properties. Renters, she said, must have internet access; they “complain about the countertops.”

Wanting other places to be just like home has the effect of making them just like each other. In the cottage we rented (no internet) were stacks of Maine and Maine Home + Design magazines, gorgeous glossies covering spectacular restored farmhouses and modernist gardens, fine arts and food. Every page features an artisanal this or a locavore that — pieces of a gentrified, stylized Real Maine whose “authenticity” is strikingly similar to the marketed “authenticity” of Santa Fe, Helsinki or Hardwick, Vt.

It’s an upscale version of the honky-tonk tourist district, the same everywhere but for the slogans on the T-shirts and the species of stuffed animal.

When I mentioned to our landlady that the magazines made me miss the old Maine, she was philosophical. She isn’t fond of those pushy renters or the house prices that gentrification hikes ever higher, she said. It’s a shame lobstermen feel compelled to sell their homes and move farther inland. But lobsters aren’t fetching much these days, she said, and people have to get by. Her daughter depends on these same forces for her living.

I realized I was nostalgic for another “real” Maine that wasn’t so hot for the real Mainers. In the 1960s my parents bought a house and 10 oceanfront acres for $4000. The whole state, not just its inland portions, was poor in those days. That poverty benefited my family.

When VPR’s Jane Lindholm asked trend watcher Kirk Faulkner if it’s problematic when the brand doesn’t quite match the reality, he laughed. “That’s pretty much what marketing is,” he said.

Sometimes the discrepancy can jar, as when visitors move permanently to the places where they vacation and expect the brand, only to encounter the reality: stinky manure, bottle-shooting neighbors or contentious politics.

But visitors can change the reality to resemble the brand, too, and not just with fancy restaurants and shops. As Lyndon State College historian Paul Searls pointed out on “Vermont Edition,” the transplants may subscribe to the traditional values — or those marketed as traditional — more passionately than do the natives. To maintain the state’s “pristine” naturalness, for instance, ’70s back-to-the-landers instituted environmental regulation. This is a good thing, but not every local appreciates it.

Tourist economies are dependency economies. Dependency requires accommodation, and accommodation takes a toll. That’s why it’s brilliant that Vermont is nurturing sectors, such as value-added agriculture, that decrease the state’s dependency on tourism while incidentally enhancing its appeal to tourists.

In the meantime, marketers may be doing some accommodation themselves. This year Maine unveiled a new brand: “originality,” described Maine’s Office of Tourism 2013 marketing plan as the “quintessential qualities of the Maine attitude — the quirky, unusual, one-of-a-kind, offbeat, original things found only in Maine.”

Might the branders be appropriating that ol’ Maine grouchiness, now exacerbated by what tourism is doing to their state?

That “up yours” from the driver on 17 was a bit of a buzzkill, true. But I don’t blame the guy. Come to think of it, I kind of admire him. His was a gesture of resistance to commerce, a refusal to be branded.