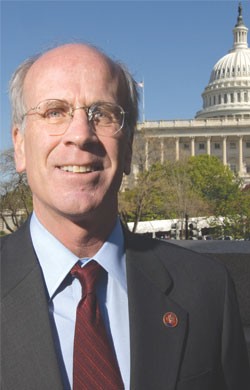 Congressman Peter Welch ramped up his fundraising last quarter, bringing in $133,827 as he seeks a fourth term in the U.S. House.

To date, Vermont's lone House member has raised $679,165 during the two-year election cycle, according to a campaign finance report filed Sunday with the Federal Election Commission. In that time, he has spent $279,147 on campaign and fundraising expenses, while giving $123,350 to other candidates and political committees. Welch has $1.25 million in the bank for his campaign against little-known Hartford police officer Mark Donka.

"The Supreme Court's decision in Citizens United has had a dramatic impact on campaign spending," says Welch spokesman Scott Coriell. "Congressman Welch has sponsored constitutional amendments to overturn the decision as well as legislation to overhaul the broken campaign finance system. Until those reforms take effect, he will continue to raise the resources necessary to wage a competitive campaign."

Donka did not return calls for comment, but campaign manager Keith Stern, who ran for the seat himself in 2010, says Donka has raised "just under $5,000" — the threshold for filing with the FEC. Stern says Donka plans to begin seriously raising money in the third quarter and expects to raise $100,000 by the November election. In the meantime, Stern says, Donka is focused more on the issue of reducing government debt than on the political horse race.

By contrast, U.S. Sen. Bernie Sanders (I-VT), who is up for reelection himself this year, has raised about seven percent of his campaign cash in the past six years from PACs — principally from organized labor. In the six years prior to his 2010 reelection campaign, Sen. Patrick Leahy raised 31 percent of his campaign funds from PACs — though that does not include contributions to his own "leadership PAC."

Coriell says decisions about whether to accept PAC money are made "on a case by case basis" and that "individual donors tend to contribute later in the campaign cycle when they are more tuned in to political campaigns." He called the impact of Citizens United no longer "an academic discussion," noting a Politico story today reporting that casino magnate and Newt Gingrich-BFF Sheldon Adelson and his family recently donated $5 million to a "super PAC" run by Republican House Majority Leader Eric Cantor.

Here's a sampling of which political action committees donated to Welch last quarter (two-year election cycle totals are in parentheses):

Welch also did some giving last quarter. He donated $20,000 in campaign money to the Democratic Congressional Campaign Committee, which works to elect Democrats to the House (in total this cycle, Welch has contributed $120,000 to the committee), and $1350 to the Vermont Democratic Party. He also gave $1,000 contributions to six congressional candidates and $2000 to state Treasurer Beth Pearce, who is running for the seat to which she was appointed in 2011.

In May, Welch returned $2500 to Wal-Mart's PAC, which donated the money to the congressman in March. According to Coriell, Welch does not accept contributions from Wal-Mart. "When the mistakes were discovered, the checks were returned," he says.

This week we're taking a closer look at second quarter campaign finance filings. See our Friday story on fundraising figures in the U.S. Senate race. Candidates for state office are required to file by 5 p.m. today.