Weinberger's Condo Project Not the Fresh Start Some Neighbors Were Expecting 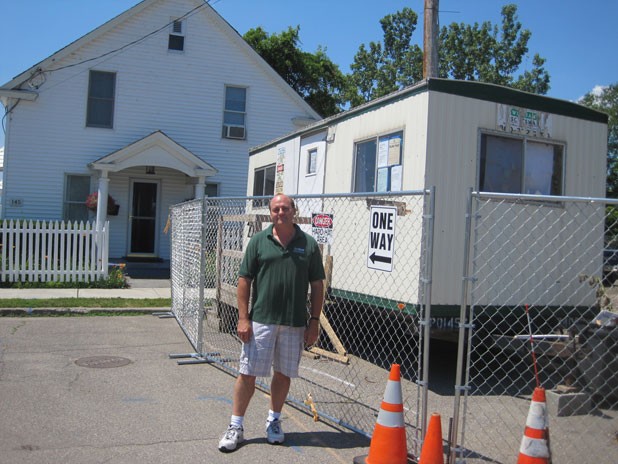 Karen Crosby says she’s “shocked” by what’s happened to the property across from her Old North End home of 36 years.

Over the past two weeks, excavators have demolished more than 80 percent of the 16,500-square-foot building on the corner of Berry Street and North Avenue. The jolting contrast between what was there and what remains is causing many neighbors to wonder how the redevelopment project — which aims to turn an old automobile showroom and warehouse into mixed-price condos — qualifies as an “adaptive reuse” under the Burlington zoning code.

It’s also left some of them wondering what exactly Burlington Mayor Miro Weinberger has to do with it.

The Hartland Group, cofounded and for years corun by the Queen City’s new leader, secured adaptive reuse designation by promising to rehabilitate an unspecified portion of the structure that stood for decades on the .65-acre parcel. In return, the city permitted the Hartland Group to construct about twice as many condo units at the site than would otherwise have been allowed. When completed next year, Packard Lofts will consist of 25 two- and three-bedroom condos with sale prices ranging from about $150,000 to more than $400,000.

In razing most of what had been built on the corner lot at 237 North Ave., the mayor’s development company does not appear to have violated any city ordinance. But opponents of the housing project now under way say the Hartland Group was deliberately coy — or flat-out misleading — in its presentations of what it intended to do under the rubric of “adaptive reuse.” Some neighbors posting on the Front Porch Forum listserv have renamed the project “Adaptive Misuse” and “Maladaptive Abuse.”

In a sworn court statement in 2005, Weinberger’s development partner Chuck Lief said, “Some portions of the existing building will be demolished to accommodate allowable new construction and the interior garage. Other portions will be rebuilt to restore its present appearance. Other portions will be reused or converted as is.” Under Hartland’s plan, Lief added, “the entire structure one can now see will continue to be strongly visible virtually as it presently stands, except that key historic features will be restored.”

But the single-family-size edifice that remains looks as though it survived an aerial bombing — or a tornado. Everything around it has been flattened, including trees at the western edge of the property, which ends at a steep embankment overlooking Lake Champlain.

Since being sworn into office in April, Weinberger’s name has been removed from the Hartland Group’s website. The mayor explains that he now holds only a “passive, minority” stake in the North Avenue project — meaning he’s “not involved in the day-to-day running of the construction job” but adds that he will derive “financial benefit” from the development.

During the mayoral campaign in January, Weinberger said that he saw no conflict between leading the city and working to build a private development here. “I don’t see why a Burlington mayor should not be a city property owner,” he said then.

In an interview last Friday, Weinberger insisted that his firm’s submissions throughout an eight-year-long battle to win approval for the project “were clear that a lot of the building would come down.” He added that the project is being carried out “very much within the way the adaptive reuse ordinance works.” Lief echoed that in a Saturday interview, saying, “If people listened, there was never a time when we made promises” as to exactly how much of the full 16,500-square-foot structure would be left standing.

Alan Bjerke was listening, but didn’t like what he heard. An attorney living in a Lakeview Terrace home directly adjacent to the site, Bjerke relentlessly battled the condo project during the local permitting process and subsequently in the state’s Environmental Court and Supreme Court. “We asked them over and over to detail specifically what they were going to tear down,” Bjerke said last week. “They didn’t.”

Ivan Goldstein, another Lakeview Terrace resident, adds in regard to Weinberger and Lief, “They think they’re doing a service, and they use all the right language to get what they want to build. But at the end of the day they’re developers who want to maximize their profit.”

Ellie Kenworthy, a member of the city’s Development Review Board at the time it approved the condo project, says now that she’s perplexed as to how the Hartland Group can describe what it’s done at 237 North Avenue as “adaptive reuse.” That claim “doesn’t pass the straight-face test,” Kenworthy declares.

But Austin Hart, the DRB’s current chair and a member at the time it approved the Packard Lofts project, says the project does qualify for the adaptive reuse designation because it was subjected to “a very thorough review” in that regard.

“More review than perhaps any project in Burlington’s history,” adds the Hartland Group’s attorney, Brian Dunkiel. “It seems premature to judge what this adaptive-reuse project is going to look like when it’s completed.”

Confusing matters is that the zoning ordinance contained no definition of “adaptive reuse” in 2005 when the Hartland Group was approved to build more condos than is normally permitted in the “residential medium density” zone that encompasses the area around Lakeview Terrace. The city has since spelled out what qualifies for “adaptive reuse” designation but because the Packard Lofts project won city approval seven years ago, the new definition doesn’t apply.

Lief himself concedes that the contrast between the current and previous appearance of the property can lead to the sort of skepticism voiced by Kenworthy. “If people look at the structure today and they’re asked, ‘Does that look like adaptive reuse to you?’ I’d probably say, ‘No, it doesn’t look like that to me, either.’” But he adds that the project will ultimately resemble what had stood on the site for decades.

The Hartland Group has demolished a 14,000-square-foot addition to a 2600-square-foot Packard automobile showroom built in 1923. Few would quarrel with Lief’s description of the now-removed 80-year-old warehouse as an undistinguished architectural “hodgepodge.”

On the other hand, the 90-year-old brick building left standing amid the rubble — which will be incorporated into the Packard Lofts development — is one of the last automobile showrooms of that era left in Chittenden County. Lief says his firm is spending large amounts of money to restore and repurpose the original retail space.

But that’s not good enough for some neighboring property owners, who are militant in their resistance to any construction that could affect their quiet enclave, which offers stunning views of Lake Champlain and the Adirondacks. Outsiders engaged in development fights with Lakeview Terrace residents say a strong element of NIMBYism runs along the street bordered on the south by the former site of Burlington College and on the north by the lot where Weinberger and Lief are building the Packard condos. Lakeview Terrace and nearby streets also include at least a few residents who welcome the project.

Regardless of the “adaptive reuse” dispute, the Hartland Group is eligible for the higher number of condos under the terms of another zoning stipulation that rewards conversions of commercial properties to residential use. And both the Environmental Court and Vermont Supreme Court have backed the company in legal challenges brought by Bjerke and other nearby residents. Environmental Court Judge Meredith Wright wrote in 2006 that “it would be an absurd result” to prevent the Hartland Group’s “removal of building elements necessary to make rehabilitation safe for future use or make the new construction possible at all.”