Weinberger Sacks CEDO Director, Asks Other Mayoral Appointees to Reapply For Their Jobs

During his inaugural press conference as mayor of Burlington Tuesday afternoon, Miro Weinberger said he asked all 35 mayoral appointees — from city assessor to pound keeper — to polish their resumes and reapply for their jobs by April 30th.

But just hours later, he told Community and Economic Development Office director Larry Kupferman that the CEDO director need not apply for reappointment.

"The mayor let Larry know that he wasn't going to keep him on, and Larry understood that was his position and was gracious about the mayor's decision," said Mike Kanarick, who was appointed assistant to the mayor Tuesday. "[Kupferman] understands that the plans the mayor has for that position don't fit with Larry's experience and background."

Throughout the mayoral campaign, Weinberger and his Republican opponent, Kurt Wright, expressed a desire to reorganize CEDO. Though Wright indicated he would let Kupferman go if elected, Weinberger refrained from weighing in on the personnel decision until Tuesday. A third candidate, independent Wanda Hines, works for CEDO and refrained from criticizing the office.

Kupferman said Tuesday he was not surprised by the decision and would be willing to remain in the position until a replacement is appointed and confirmed by the city council.

"I know I serve at the mayor's discretion," he said. "If he feels he needs to put someone in place that best meets his vision for this department's work, that's his role and responsibility to do that."

Kupferman, who served as CEDO director for five years and as the city's human resources director for a year before that, said he has no immediate plans for the future but expects to stay involved in Burlington's social services.

"I'm looking forward to keeping engaged in community work," he said. "I've been part of the working life here in Burlington since the '70s and I continue to look forward to doing that."

During the afternoon press conference at City Hall Auditorium, Weinberger said he had encouraged mayoral appointees during a morning department head meeting to explain in a two- to three-page letter why they should remain in their posts. He said he would decide who would stay and who would go by June 30th, the date by which most current mayoral appointments expire.

Some city hall staffers hold multiple appointments — for instance, Gene Bergman simultaneously serves as senior assistant city attorney, grand juror and constable — so the actual number of personnel affected by the decision is fewer than 35.

“What I expressed to them was that this was their opportunity to articulate what they would like to do together over the next year, what challenges and opportunities we face together,” he said. 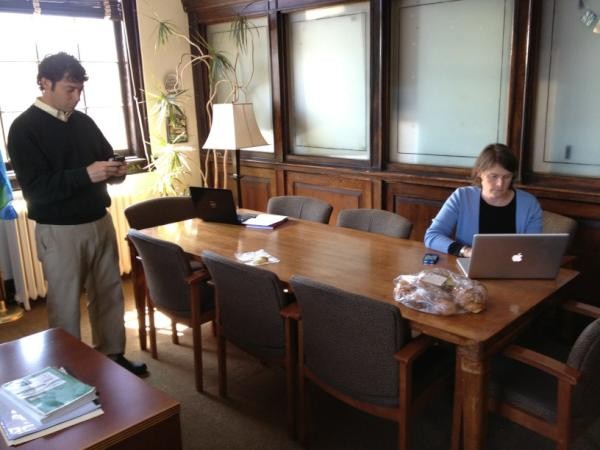 The new mayor wasted no time in appointing two members of his campaign team to temporary city hall jobs. Kanarick, who served as campaign spokesman and finance director, was tapped to fill the assistant to the mayor position vacated by Joe Reinert. Campaign manager Jessica Nordhaus is serving temporarily as a special projects manager in the human resources department, filling a vacant position. [Kanarick and Nordhaus are pictured in the mayor's office in a photo snapped by Weinberger and posted to Twitter Tuesday.]

Weinberger said he is considering reorganizing the two-member staff of the mayor’s office, though he is holding off on a final decision until later this month. The mayor’s staff includes the assistant to the mayor position as well as an executive secretary position currently held by Peggy Ellis-Green.

“I certainly would not go for reorganization that would cost the city any additional money, so we’re also looking at cost savings opportunities in the mayor’s office,” he said.

Kanarick said Weinberger made the two temporary appointments in order to ensure that he and Nordhaus would be immediately available to facilitate Weinberger’s transition.

“For Miro to have Jessica and myself being able to work for him today, he was able to use temporary hiring authority,” Kanarick explained.

The assistant to the mayor position is the only mayoral appointment that does not require confirmation by the city council, Kanarick said. On Monday night, by a vote of 12-2, the council approved the appointment of Paul Sisson as interim chief administrative officer for a temporary term expiring June 30th.

Weinberger said further decisions regarding mayoral appointments would not come until current city officials express their desire to remain at city hall or move on.