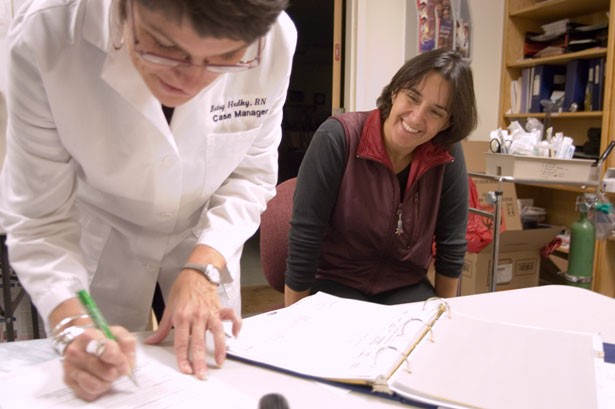 Not every Vermont town has a 45-bed hospital, a full-service pharmacy and an elite private college with its own health center. Middlebury does. But the seemingly affluent town and its environs are also home to low-income residents who struggle to access proper medical care.

On any given Tuesday night, some of them make their way to a private medical office on the edge of town, where volunteer practitioners are serving a sometimes hidden population. Since its official founding in 1995, Middlebury's Open Door Clinic has offered free, confidential medical services to un- or under-insured adults earning up to 300 percent of "poverty" wages - about $30,000 per year for a single person. Like its eight statewide counterparts, this clinic is a lifeline for poor Vermonters who might otherwise fall through the cracks of a faulty health-care system. In 2004, about one in six - 45.8 million - U.S. citizens were uninsured. In Vermont, 1 in 10, or 61,000, residents are uninsured. Thirty-five percent of those people have been without health insurance for at least five years.

Open Door admits many of the "working poor" - employed Vermonters who can't afford a health-care deduction. But the clinic's fastest-growing patient population is not U.S. citizens: they're migrant workers laboring on the dairy farms around Addison County. For myriad reasons, from fear of deportation to lack of transportation, the Middlebury clinic may be their only health-care option. Last year, the staff treated 37 Hispanic patients - up from zero in 2001.

A cross-section of the low-income community finds its way to Open Door on a recent October evening. A woman with long blond hair announces herself shyly, then cozies up with a magazine. Minutes later, a man in hunter camouflage sits down beside her in front of a sign that reads, "COVER YOUR COUGH . . . CLEAN YOUR HANDS."

Two smiling Middlebury College students are stationed behind the front desk. At that institution - where individual tuition cost exceeds poverty-line income for a family of four - it's easy for students to shelter themselves from "real" Vermont life. But thanks to the efforts of a Spanish professor, several "Midd kids" are establishing connections with the local Hispanic workers. Some of them visit farms, while others volunteer weekly at this clinic.

One of tonight's volunteers, a 22-year-old senior named Drew Livermore, is serving as a translator. A Spanish-biochemistry double major from Wisconsin, Livermore confirms that interest in Vermont's Mexican population has increased among his peers since he arrived here three years ago. "I get an email every week with opportunities to help migrant workers," he explains. "There's quite a lot of interest."

Next year, Livermore will begin medical school, so this clinic offers ideal training for a career in health-care work. But he's not here for professional development. "If it's a slow night, I'll just stay and chat with the migrant workers," he reflects. "I'll see how they got here, where their families are from . . . That's one of the nice things about the clinic - that I can get to know them."

Tonight, in fact, happens to be pretty slow. For a portion of the evening, the student waits patiently behind the front desk. Then a fit-looking Mexican farm worker in a denim jacket and white sneakers enters with his boss, a local dairy farmer. Livermore rises to shake the man's hand. They walk together to a back office, where the student helps "Carlos" receive advice about joint pain.

After the consultation, Carlos, 39, agrees to chat with a reporter. Originally from the state of Tabasco in southeastern Mexico, he's been living in Vermont on and off for four years. His two sons, 21 and 19, now work alongside him. "This is a good service," he asserts, speaking in Spanish. "The doctors are very nice and conscientious."

Getting help with chronic conditions is another story, however. "Sometimes, your bosses don't have time . . . So, how do I explain? It's complicated," he muses. "Communication is difficult. Sometimes, we have something wrong with us, and we can't explain what it is . . . When we see someone who speaks Spanish, we take advantage of the moment to explain what's ailing us."

Although its system is far from perfect, Vermont ranks among the top five states in the country for state-subsidized health-care coverage, according to current figures from the federal Department of Health and Human Services. The state's 18-year-old "Dr. Dynasaur" program - which is being threatened by the Bush administration - covers children at or below 300 percent of the federal poverty line. This week, Vermont doctors and nurses will start dishing out care through Catamount Health, a statewide program that aims to serve uninsured Vermonters who don't qualify for Medicaid. And earlier this month, Vermont Senator Bernie Sanders helped to pass a landmark federal appropriation that will greatly benefit Vermont's existing network of community health centers.

The nine clinics that comprise Vermont Coalition of Clinics for the Uninsured don't receive the same federal funds that community health centers do, but they appear to be an increasingly crucial component of the state's health-care infrastructure - they're a low-lying safety net. Over the last seven years, VCCU has almost doubled coverage, serving close to 5000 patients in 2006 with a quarter of a million dollars in medication and vouchers. Only one in four of those patients was unemployed, and more than half of them say they would have gone without medical care had it not been for VCCU services.

Though administrators from respective VCCU clinics work together, each clinic fills a specialized niche. Some, like the Health Assistance Program in Colchester, connect directly to larger medical establishments and provide comprehensive referral services. Others are freestanding and give specialized care depending on availability of local professionals. In Middlebury, the focus is primarily on family medicine, but chiropractic, osteopathic and some alternative medical services are also available. "Every clinic sort of has its own identity," says Open Door's administrator Ken Dabbs, "because it's based on community needs."

Dabbs, 48, has been directing the clinic since June. Tonight he's standing in a corridor with registered nurse Betsy Hedley, 45, the only other paid employee. Hedley says the clinic has traditionally helped working residents who don't qualify for state health programs such as the Vermont Health Access Plan, which provides coverage only up to 150 percent of the federal poverty line.

According to Hedley, about half of Open Door clients receive "ongoing, primary-care services" such as blood-pressure screenings; 35 percent get "temporary care" for disorders such as bronchitis or bladder infection; 5 percent suffer from "acute needs," which are often related to chronic conditions such as diabetes. "One guy on seizure meds was cutting his doses in half," she recalls, referring to a patient in the last category. "So when he came to us, he was very grateful."

Back in the early 1990s, Open Door used to be a traveling bus in the style of San Francisco's methadone vans. "Initially, the clinic met with a lot of fanfare," Dabbs says. That visibility allowed Addison County's rural population to get care, but the van also "overextended" the volunteers.

In 1996, Open Door moved to the first of several fixed locations, eventually settling last winter on the offices of Champlain Valley Cardiovascular Associates. Not surprisingly, a home base has been a mixed blessing. On one hand, doctors have access to high-tech equipment. Moreover, it's easy for practitioners to partner with nearby Porter Medical Center, which donated almost $80,000 in grants and ancillary services in 2006 alone.

Getting to the clinic, however, can be a challenge for patients who don't have wheels. Addison County Transit Resources has been facilitating travel to and from Middlebury, Bristol, Vergennes and surrounding areas since 1992, but Hedley reports that only about one in 10 get to the clinic via ACTR shuttles.

And even with good transportation services, one night a week represents a small window of opportunity. "One of the hard things is that we appear to function as a doctor's office, but we don't," Hedley observes. "If you come here on Tuesday, but on Wednesday you develop symptoms of strep throat, we can't help you until next Tuesday."

Other problems are more systemic. Dabbs hints, for example, that some migrant workers don't want to call attention to themselves by traveling into town. That's worrisome, considering about 90 percent of the migrant workers he deals with aren't up to date on immunization for tetanus - a disease that causes death or functional disabilities, with an average per-case treatment cost of $84,000. According to the Vermont Department of Health, there have been two documented cases of tetanus in Vermont since 1992.

Carlos, who says he never goes into Middlebury for pleasure, reports that none of the Mexican workers he knows are properly immunized. "There are a lot of workers who don't receive services," he declares, heading out to the parking lot. "I'm lucky that I have a good boss."

The greater Middlebury community is doing its part, too. Open Door now receives support and donations from a host of area businesses and churches. So far this year, volunteers and translators have contributed almost 1000 service hours. And Dabbs is making efforts to drum up interest through three separate state agriculture organizations and the University of Vermont's Nurse Practitioner Program.

The state health department is in the process of expanding its "Vaccines for Adults" program to include VCCU patients.

Dabbs is also hitting the streets. In the last two months, he and a group of volunteers have offered three mobile health-screening clinics. The first, which was held at a local farm, drew 55 farm owners, workers and family members. The other two took place at a local church and attracted a combined 40 Spanish-speaking migrant laborers.

"We're trying to get the word out," Dabbs says. "We haven't been 100 percent successful," he admits, "but we're working very diligently, because we do want everyone to know. There's no reason for someone to end up in the emergency room if they can come see us.

Vemont's Clinics for the Uninsured