On Friday night, Gahlord grilled a steak from Laplatte River Angus Farm, along with corn-on-the-cob, plus potatoes, sweet onions and rosemary done up in a foil packet with butter, salt and pepper. We also had a salad of local arugula and romaine lettuce, with no dressing, because I was too tired to bother making any. Naked greens are good for you. 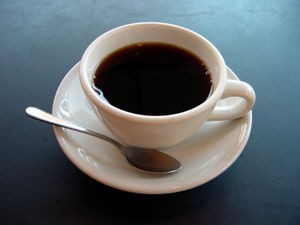 Saturday's breakfast was very waffle-centric. I accidentally made a passable coffee substitute when I burned some black beans with honey — I just strained out the beans, added some hot water, and voila!  Instant chicory flava. Not sure whether I'd want to recreate the experience, though: the drink was very bitter, and the built-in sweetener made it taste a little weird. I did add milk, but it might have benefited from more dilution with water. Definitely woke me up, though.

As you can tell, I experimented with black beans this weekend. They don't respond to baking as well as the yellow-eye beans from North Hero that we've been eating. Slow simmering on the stove cooks them eventually, but it takes a very long time. Once they were done, we had savory black beans stewed with garlic, which I used as a base for huevos rancheros, along with leftover grilled corn cut off the cob, and some tomato-basil salad left from Thursday's potluck. I liked this way of fixing eggs so much that I had them for two meals in a row. 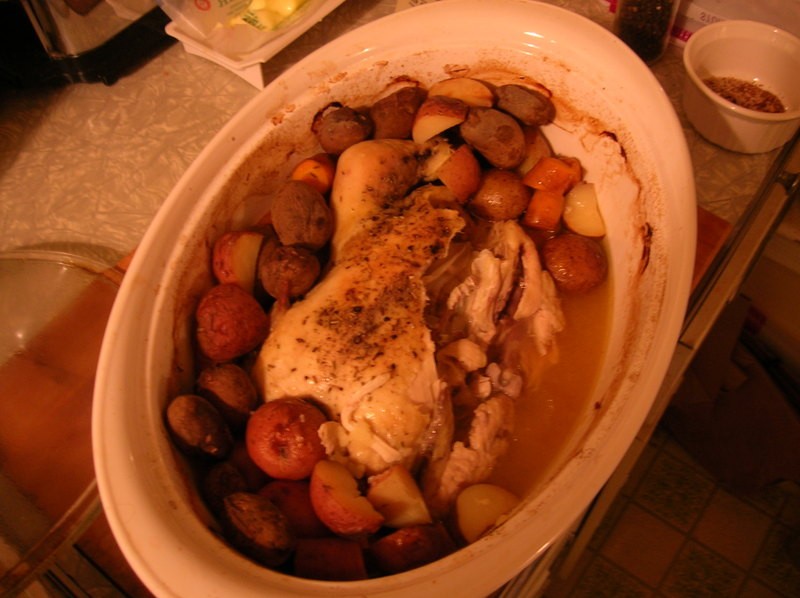 Yesterday afternoon I roasted a Misty Knoll Farms chicken with carrots, garlic and a variety of local potatoes. I covered the bottom of the roasting dish with about 1/3 of a bottle of rhubarb wine, another fine local vintage made in Cambridge at the Boyden Valley Winery. I usually add chicken stock to the pan as well, but I think it turned out OK with just wine. Sometime later this week I'll make chicken soup, unless it gets really hot again, in which case I'll freeze the bones for later. I find that I'm calculating meals more closely this month, because making one dish that lasts for three or four meals means I don't have to cook again during the week if I don't feel like it.

Breakfast today was half of a Ginger Gold apple (they're huge!) from Champlain Orchards, cut up, with maple yogurt from Butterworks Farm. I also had half a multigrain waffle from last week's brunch, popped into the toaster and drizzled with maple syrup. I'm excited about the Ginger Golds — they seem very similar to Granny Smiths, an apple I use a lot in the kitchen because they don't turn mushy when cooked. I bought a bunch of these at City Market on Sunday, and German apple pancakes are a definite possibility this week.

For lunch, I had cherry tomatoes with some of Saturday's black-bean-and-corn mixture and the heel of this week's Red Hen localvore loaf. I know we're picking up another Red Hen loaf tomorrow, but I keep baking bread: I happened to have some oatmeal and the dregs of a container of apple cider in the fridge yesterday, so I mixed it up with yeast, then with all-purpose flour, butter, milk and more flour to get a loaf with a much softer texture than last week's sourdough. Here's what it looked like while rising. We'll use this bread to trade or swap for other goodies this week, or else we'll put it in the freezer.

In keeping with my goal of maintaining a spiffy, light-filled fridge, dinner tonight should be a frittata of oyster mushrooms, potatoes, onions and beet greens. I'll make it with egg whites. Those are left over from an egg-yolk custard that became black-bean-and-honey ice cream last night. Perhaps unsurprisingly, the ice cream is also slightly coffee-flavored. (My friends Mandy and Greg are hosting a dessert party later this evening, and that's what I'm bringing. If the taste test goes well, I'll post the recipe tomorrow.)